OK, OK, I confess. I bought some cards I didn't even need. Of course, none of us truly need baseball cards. Some other evening I'll tell you the amazing true story of how all items are priced in our country, as told to me by an Old Farmer. Old Farmers know everything, but they don't buy baseball cards. I only have so much time tonight to blow off payroll, invoices, and job reports to spend with y'all instead.

What cards were these? Why, I went gambling on 2011 Topps Update. You may recall that I mentioned I was having a ridiculously hard time pulling the Mike Trout RC from packs of that set. And then I noticed that I was having a ridiculously hard time finding packs of that set on store shelves. Particularly at Wally World and the Bulls-Eye....cards don't age much in those places. I suspect that is where repacks mostly come from. And any Hobby stores that actually still sell packs of Baseball cards astutely doubled the price of their remaining inventory of '11 Update. I was up to 6 or 7 hundred base cards, nearing two sets probably, and still no Trout. The thought of having to pay full Retail for one, rather than ripping one out of a retail pack, was starting to worry me.

Enter K•Mart. You remember K•Mart I hope. Blue Light Special anyone? Boxes of the mega-over-printed 1982 20 Year Anniversary Set for only a dime each - even in the late summer of 1982! {I like those cards, myself, and not just for the unique '75 style Fred Lynn, but K•Mart sure didn't take lessons from Topps on how to separate baseball fans from their disposable allowances/income on that one. The Old Farmer could have told them easily - don't put the whole set in a single package! We ain't buying bubblegum here. Well, for a dime, I might have been...} 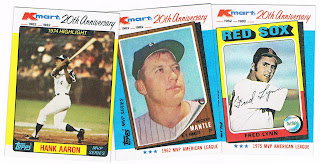 K•Mart has had it rough for a few years now, and like most retail in the Amazon-eBay-UPS world, their future is probably uncertain and their end could be near. I will miss the place. I used to live in the biggest town in Michigan without a McDonalds; a known fact somehow. That was a couple decades and many other smaller towns building McDonalds ago. I suspect we are now the largest town in Michigan without Wal•Mart, and I am OK with that. It's all moot now - Meijer's is greasing the local zoning boards and is about to start construction. It's a Midwest thing and you are probably nodding off by now.....back to the baseball cards. Meijer's sells baseball cards, so I'll be ahh-ite.

K•Mart and Topps obviously go way back. I noticed some sort of 2006 or 2007 package of some sort of Topps cards that I won't be going back to included some sort of K•Mart exclusive cards, before the boys from Arkansas co-opted the idea, or all the hotties running around in the Bulls-Eye did it. But those days seem to be gone. Plenty of Topps products, but no more special Blue Light cards.

Plenty of old Topps cards though. In my haunting of K•Marts all across a half-dozen states this winter, I could have bought almost any Topps product of the last half-dozen years you could name. In boxes even dustier than some of the ones Geoffrey still has for sale at Toy•Mart, errr, Toys-R-Us. And plenty from those other card companies too. Football, Hockey, NASCAR, Basketball - even Topps Basketball — How long has it been since you saw Topps Basketball for sale, retail? Nowhere near any NBA arena city I would wager.

And back to the subject at hand, the ultimate fish as it were, and as it might turn out a bit later on: Nice card. Do you think possibly perhaps that it is good luck to have your Rookie Card be a Night Card? Maybe I'll have to put a bunch of such cards on a binder page and track the results for a few seasons. Could be neat. Of course, I probably won't be putting a Mike Trout RC in a binder page. They make special little plastic cages for cards like this one.

And what I really like about this card is the way it triggers pleasant youthful memories and maybe even a little bit of endorphin release when the subliminals on this kick in:

Well played Topps, very well played. 'cept, why the heck did I never order a Baseball Card T-shirt when I could? I got plenty of other sweet Topps gimcrack back then, I'll share it with you some fine day. You'll get all sentimental and jealous though. As for this mysterious Baseball Card T-shirt, I can only hope the Blogosphere can hook me up with the deets on that wonderfulness I missed out on - surely a perfect Toppic. Google seems a bit in the dark on it. Historians Wanted.

And yes, I finally landed the Trout. In Morehead City, NC, back in February, at a particularly disorganized K•Mart card section. Some K•Marts have their cards back with the Toys, some don't. Ironically, I have caught my best catches this winter at the ones with cards only up by the registers, where the pickings would be slim you would think. Like a Lineage blaster in Owensboro, KY, nicely marked-down for oldness. There in Morehead City, some of the '11 Update Fat Packs were marked down, as was the lonely Lineage Fat Pack (yep, it got me a crucial '75 mini, thanks). But only some of them. I suggested to the cashier that all ten of the Fat Packs were the same product, so why couldn't all of them be three bucks, instead of five bucks? But since I was just happy not be paying Hobby prices for Retail packs, I didn't press the point. The Bar Codes Can Not Be Changed, either way. The Karma of being a prickly customer probably cost me the realization that I could have picked up a couple cheap blasters of 2009 O-Pee-Chee right there so far from Canada; the ones that just might have those 75-style inserts, copyright rip-off deals I now lust after.

Right there in the first of the ten Fat Packs, up from the stack of 18 cards jumped Mr. Trout. I considered trying to return the other 9 packs I no longer needed, but I'm a Baseball card collector, so that was out of the question. I might pull the blue sparkle Trout. Or, some basic doubles - I couldn't help but recall the time I was fishing for sea trout not far from Morehead City, and I caught a trout on 6 consecutive casts, missed a hook-up on the 7th, caught two more, and then missed another one on the 10th. One of my most memorable fishing trips ever.

But of course baseball cards don't work that way, not for All-Star Rookies especially. That only happens with utility infielders no one has ever heard of - need any '79 Champ Summers cards?

So I had my Trout at last. I could move on to shoveling money at my Topps master for other kinds of their "cardboard". And then the real baseball season started. And I started hearing the words "one of the All-Time Greats" whispered about the Superstar featured on this card:

edit, 5.5 years on - prolly stolen Internet image lost to the mists of Internet history. was likely an image of a Miggy RC

Last year I had the pleasure of watching Cabrera play against Trout, in person. Cabrera hit a Home Run; Trout couldn't figure out Tigers Ace Max Scherzer. I went home happy. And a seed was planted....I would need a certain baseball card. The Old Farmer would laugh at me.

Enter K•Mart. My local home-town K•Mart had 8 more of those 2011 Topps Update Fat Packs. The first I had seen in quite some time, while hitting up the outta-the-way box stores for discounted Lineage (also generally disappearing). Surely I was now due a liquorfractor Trout, being the oh-so-proud owner of over 3 sets of '11 Update, minus the Mike Trout card of course. And I knew there was Mojo to be had in '11 Update.

So I bought all 8 Fat Packs. That I didn't need whatsoever. And caught 2 more Trout. Just regulation Trout though, fully legal but without diamonds and completely sober. Will a couple trout help me catch a Marlin? Maybe if a Rizzo swims along too? Sorry, can't seem to connect the name Anthony Rizzo to anything maritime at all. And it's called pie-in-the-sky, not fish-in-the-sea: i.e. the likely odds of ever finding such a trade.

Series 2, well, it just can't come soon enough...and, uhhh, y'all need any '11 Update? I sure hope so.
Posted by BaseSetCalling at 12:50 AM
Email ThisBlogThis!Share to TwitterShare to FacebookShare to Pinterest
Labels: 2011 Update, RC