John Jay & Tony LaRussa got nuttin' on this card

Cameo cards are neat, sometimes. I set them aside, sometimes. Those times when the 'cameo' is just the back of a player, with his name on the jersey there, those don't count.

This year in Series 1, Topps gave us a heckuva cameo card:

A retired manager cameo. Huhhh? Ron Gardenhire is already hoping to shag home run balls in the St. Louis bleachers? No, no, he isn't retired, just yet. Be nice.

Topps does love the more famous all-time baseball people of course. I guess winning a World Series in each league will get you some Topps action later on down the road.

I have enjoyed this card all season long. I like cards with the fans on them. Aside from Gardenhire's stunt double there, we have a quite possibly drunk Nationals fan seemingly yelling at Jay, "I already got the ball, dummy!" And Jay himself comes off real good on the card for the most part, taking one for the team robbing some National of a home run. But if baseball cards ever make baseball players discreetly ask a trusted associate "do I look fat on that card?", well, the associate would kind of have to tell the otherwise skinny Jay, "uhh, yeah, actually." Weird.

When this card came out, it was another occasionally labelled as part of the Out-of-Bounds series of short-prints, like several other outfield cards. But Topps is sneaky, sometimes. The ball Jay just caught is very much in-bounds.

I am particularly enjoying the card today, sorta, cuz I just won a different copy of it on eBay - the /62 black border parallel. I was having a tough time deciding what color to use for it in the parallel project. Wal•Mart Blue is a regular choice for me for the red teams naturally. Any Foil or Sparkle would be right out on such a great shot of far more than just the baseball player. I don't much care for the red teams on the Target Red or Pink parallels. I'm mostly avoiding the Camo parallels, 'cept just a pair of Padre cards, as much as I can - which isn't too difficult in Series 1 or 2, but I will probably really, really need them from Update.

I would like to brag a bit more and scan my new black border Jon Jay card for you like a good blogger should, but I'm jumping the gun here as the card probably hasn't even shipped yet. Just use your imagination, like when you wonder if your favorite ball-player really did swing a whole baseball bat that your tiny slice was once a part of.

The black parallels always win. They're like trump in the world of parallels, if you ask me. I would love to see a whole set of Black Sea Turtles. They go good with every base color and every team. Whenever Topps returns to making another set of the usually controversial black-border cards some day, the obvious parallel to make with it will be a white border parallel for the h8erz.

So when these parallel dilemmas pop up, the best answer is always - when in doubt, wear black. You never look fat in black, though I could have that backwards. Perhaps baseball cards (or baseball card blogs) aren't the best place to pick up fashion tips.

Which is what I was doing yesterday, when I noticed Dime-Box Nick launching a smart new collection. It triggered a memory of a certain very bad baseball logo, one that I knew was approaching the top of the blog-me, blog-me pile of cards.

I thought I might even have that logo on a baseball uniform on a baseball picture card, and I did, but that has zero to do with why this card is in the blog-me-already,-lazybones pile: 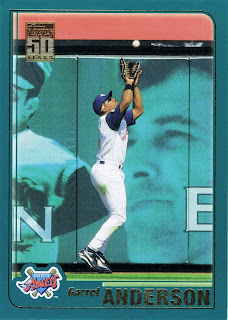 I'm sure even Topps was glad to see that one go. It's there on the uniform too partially, though I wouldn't think it should count for those future uni cards Nick is chasing in those Roosevelt boxes.

The Angels. The team that makes me just shake my head. Or maybe do a face palm, though I'll spare you any more meme-ery of that one. There's no shortage on the ole Internet. But the Angels. Really? Where do they play? Topps won't even tell us any more, their cards just say Angels®. What's the name of the team? Who can keep track? Ownership a mess, roster a mess, just that one fishy card in every set no matter how small that's worth writing home about these days. They're not even loveable losers, the way the Red Sox used to be, or the Cubs, or the Mets. They finally won a World Series this century, so they're done with MLB fan pity for decades out. They escaped from Mickey Mouse only to head off towards a Mickey Mouse operation rivaled only by that Longoria mess in South Florida. Sorry Angels fans, but a mess is a mess. Especially when there's those infinite levels of baseball history and tradition just across the county there. A team with solid logos and uniforms and cards and everything else, these days.

As for Anderson's card there, I can't tell from various websites if that is a home or away uniform. I'm hoping away. And despite the just plain not-good baseball iconography on the card, I love this card.

Because when I see this card, I think, Heck Yeah! I got a Babe Ruth card! Though I can't see how Babe Ruth ever made it onto the Duck Pond in Anaheim, or whatever Walt Disney called the place around the turn of the century. Maybe Mickey Mouse was more unpredictable than I think now.

And that was my first Babe Ruth card ever. It was right there ready to greet me when I blew the dust off the box that said "2001 Topps" earlier this summer. The first card in the box. Card #2 and #3 were underneath it, trumped by card #4. This was a time when the only baseball cards I knew of that had old, old baseball players on them were the 1975 MVP cards. So before the deluge I guess.

Topps loves Babe Ruth cards now. And I still like them too. You never forget your first Babe.....though I have to actually admit I am not 100% sure that is Babe Ruth there on the outfield wall. It's not like I had a Babe Ruth PC to do an instant check with. It looks like Babe Ruth, I think. Who else is gonna get silk-screened (or however they got him on the wall there) onto an outfield wall? Bart Giamatti?

So another Babe Ruth dilemma in my weird world of baseball cards. Goes well with the mystery '75 style Babe that continues to elude me. Now if I could just figure out why they put Kent Tekulve on that outfield wall there with him.
Posted by BaseSetCalling at 1:54 AM
Email ThisBlogThis!Share to TwitterShare to FacebookShare to Pinterest
Labels: 2001, Parallels