Seems like the perfect time for a blaster of these.

I am fortunate tonight to be around a cable television and be watching the first game I've ever seen at PetCo Park.

I am also fortunate that I finally picked up a blaster of Opening Day recently. I grew to enjoy this set quite a bit last year — let's see if I like some more of these baseball card image products, for children.

I am always a sucker for 3D cards. They activate pleasant memories in my brain of eating industrially processed wheat coated with a yummy twinkling white sugar solution. Mmmmmm-mmmmmm. AND I get a baseball card? Yes, please. Methinks a certain solely licensed manufacturer of imagery products of Major League Baseball® players, which also happens to be a manufacturer of candy, is missing out on some sales possibilities from activating such long buried memories. I mean, once you reach a certain age, it's easy to go back to indulging your natural human urges, such as your sweet tooth. I if I could just get baseball cards along with a sugar fix, ahh, just think how much money I wouldn't save on such a product…

The 3D cards in this year's Opening Day are no exception. I will be chasing these: 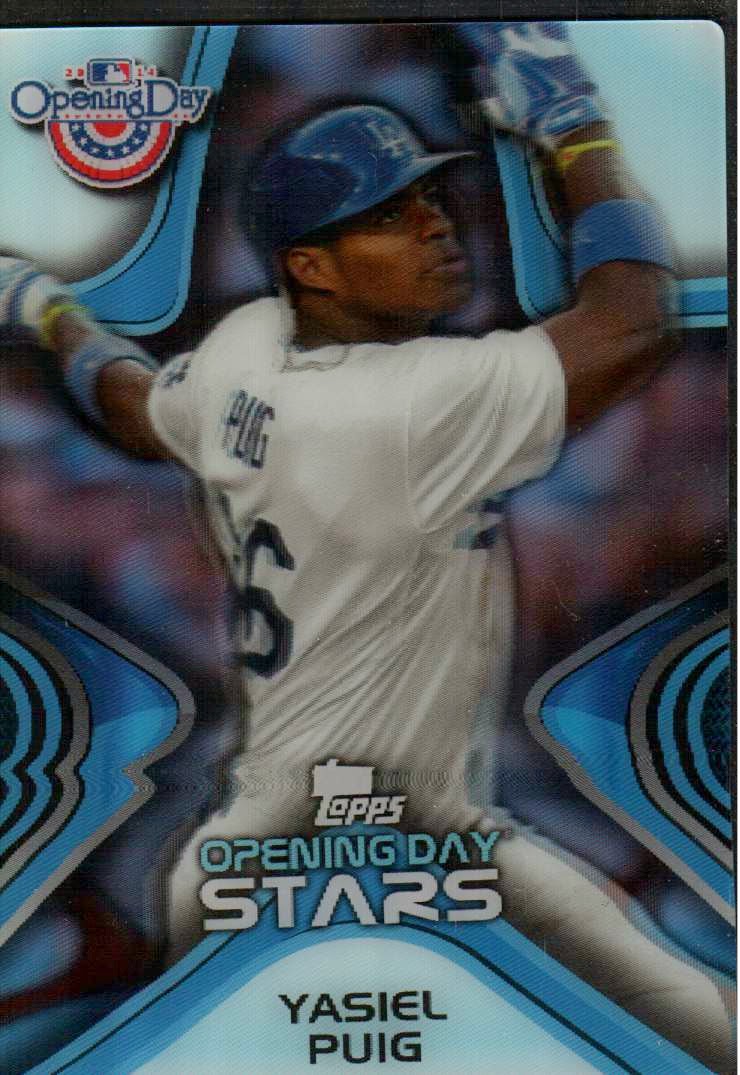 I love designs that use a team's color. I like seeing the star motif like this. I liked last year's versions of these, though Topps didn't exactly move the needle much from the year before. This year, it sure moved a lot, and so did my scanner as these thick cards made it work for a living: 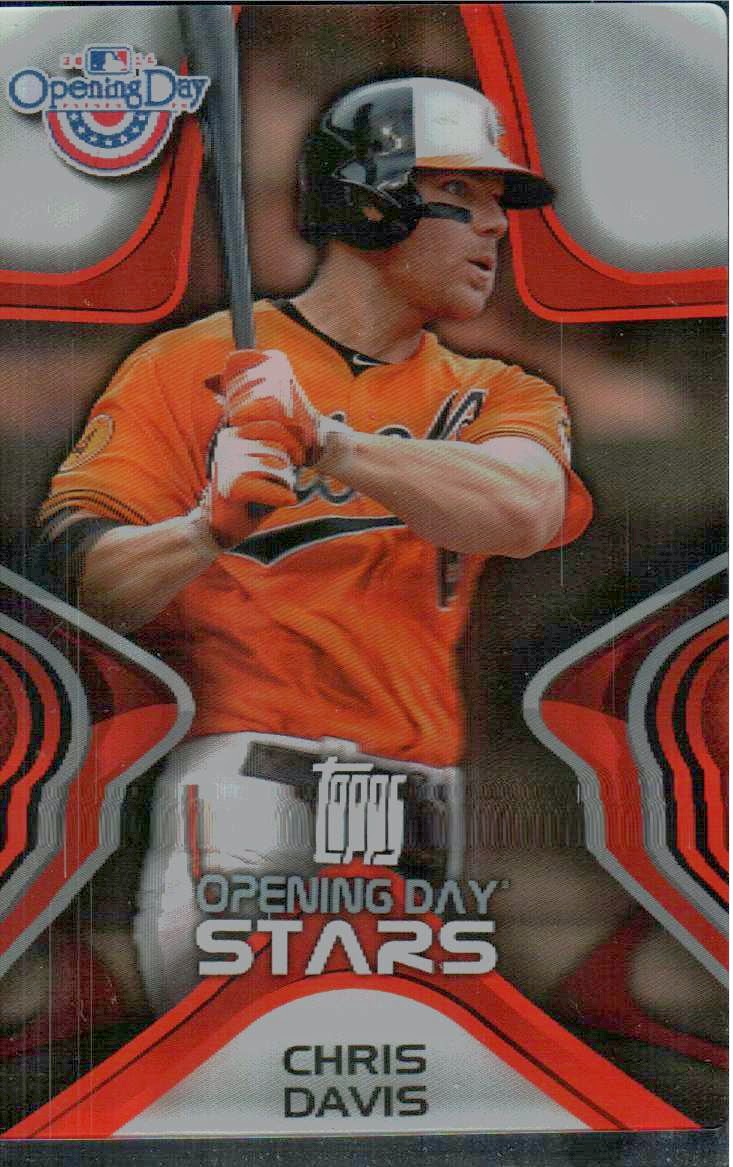 I've only pulled 2 … 23 to go I would imagine. I'll spare you any more poor scans of them though…let's just think about these baseball cards, not these scans.

Since Opening Day is mostly just cards from Series 1 & 2 I know I will be owning otherwise, the main appeal are these alternative insert sets. So let's hope they are appealing: 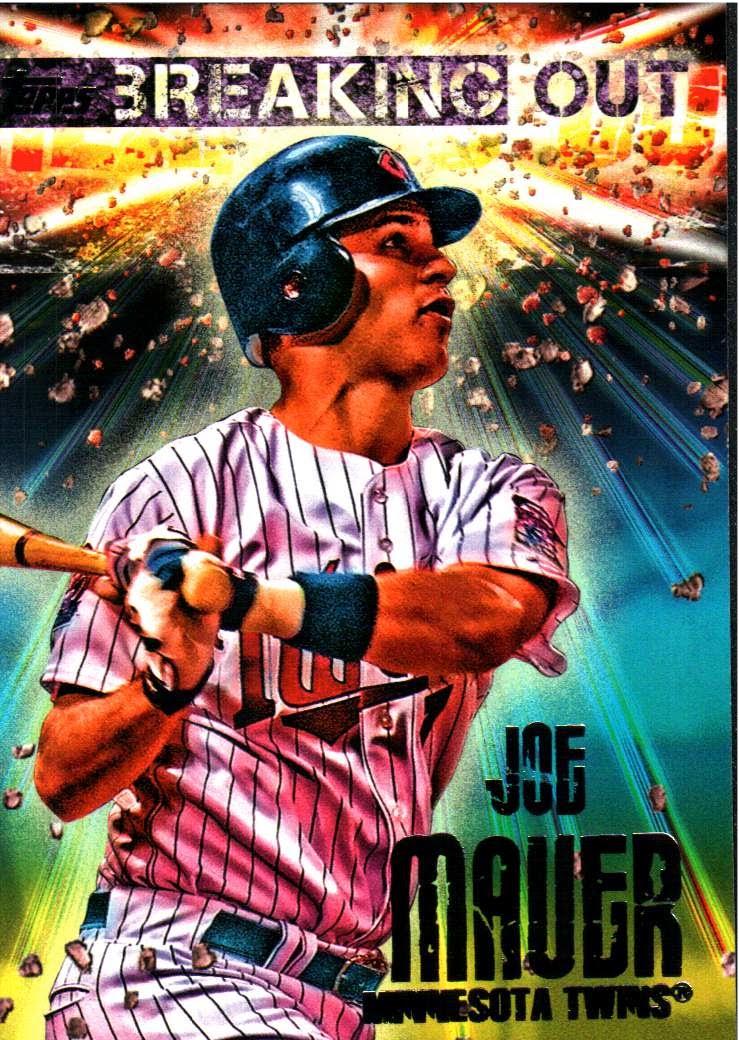 In case you have ever wondered what happens when the Twins mix their blue and red solid color alternate uniforms in a load of laundry with their home whites. Which doesn't explain how the Mariners uniforms turn pink on these inserts as well. Overall, not for me. I think these will be popular with Player Collectors a few years from now, when they have mostly been packed way in collections, and they become just slightly scarce. Though I don't plan to own a set of the Breaking Out cards myself, I don't think one could say Topps is playing conservatively with these particular children's products. 90s-esque, unique amongst inserts of recent years. Go for it, Topps.

Which they did not do with the Superstar Celebrations. I pulled 2 of those, but must have found them too blah to set aside into the Scan-These pile. I liked a few of the Celebrations cards last year, but this year's model is of course zoomed in to floating torsos, at least on the two I pulled. With no baseball park context, they just don't work.

Another 90s-esque, take-chances-to-entertain-the-kids design, are the Fire Up inserts: 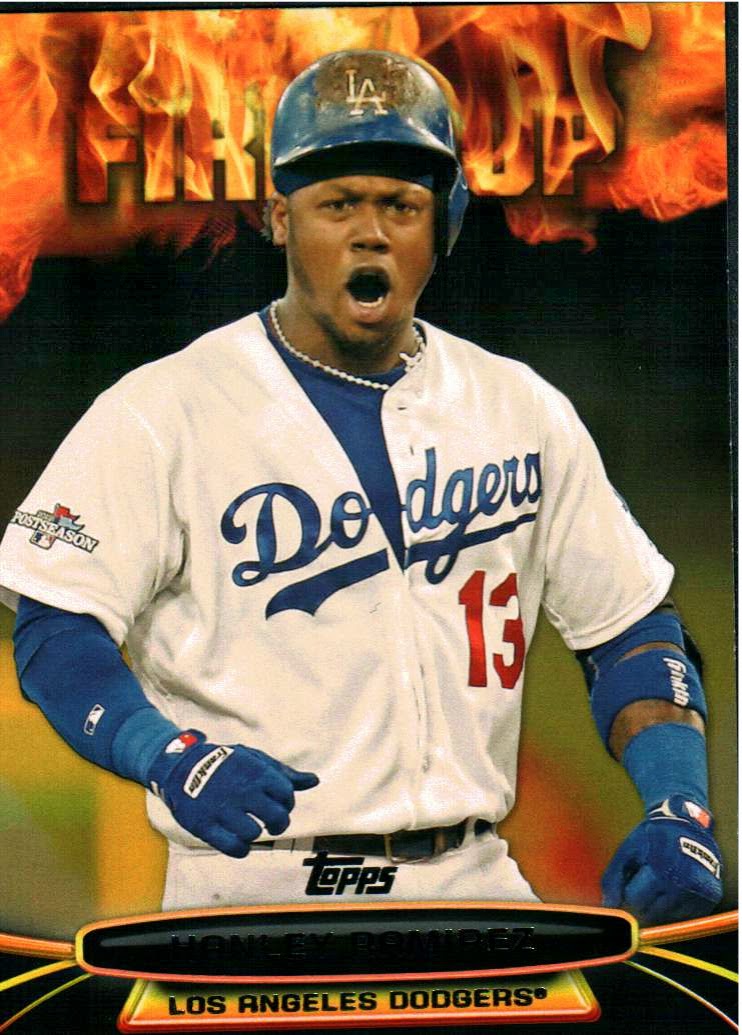 Whoa, Hanley is so fired-up his batting helmet has caught fire? 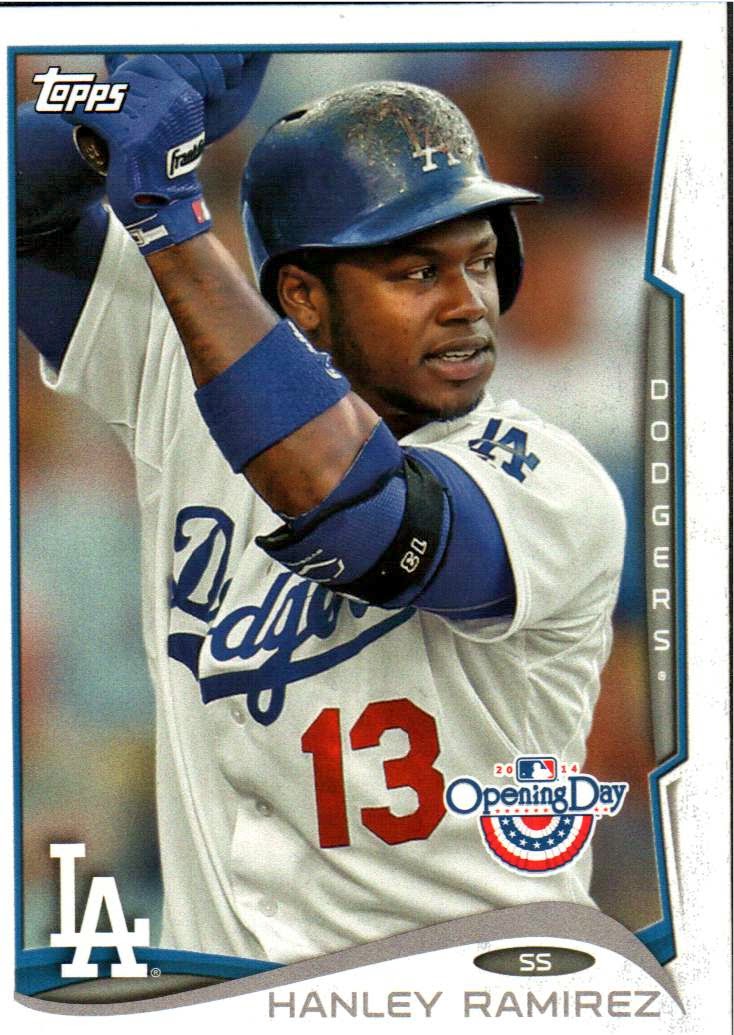 Nah, of course that's just Hanley's personal batting helmet tradition. If I were writing his card back, I would surely call him or his agent and get a direct quote on this. I just watched his first At Bat of the season … the batting helmet already looked like this. Should I have watched the first Spring Training game to ever see him in a minty fresh batting helmet? If only time were my friend, I would blow hours of it scouring the Dodger fan blogs for all the details. Feel free to post a link to anyone who has ever figured out the mysteries.

And beyond the unique inserts, Opening Day has more fun cards, like the Mascots: 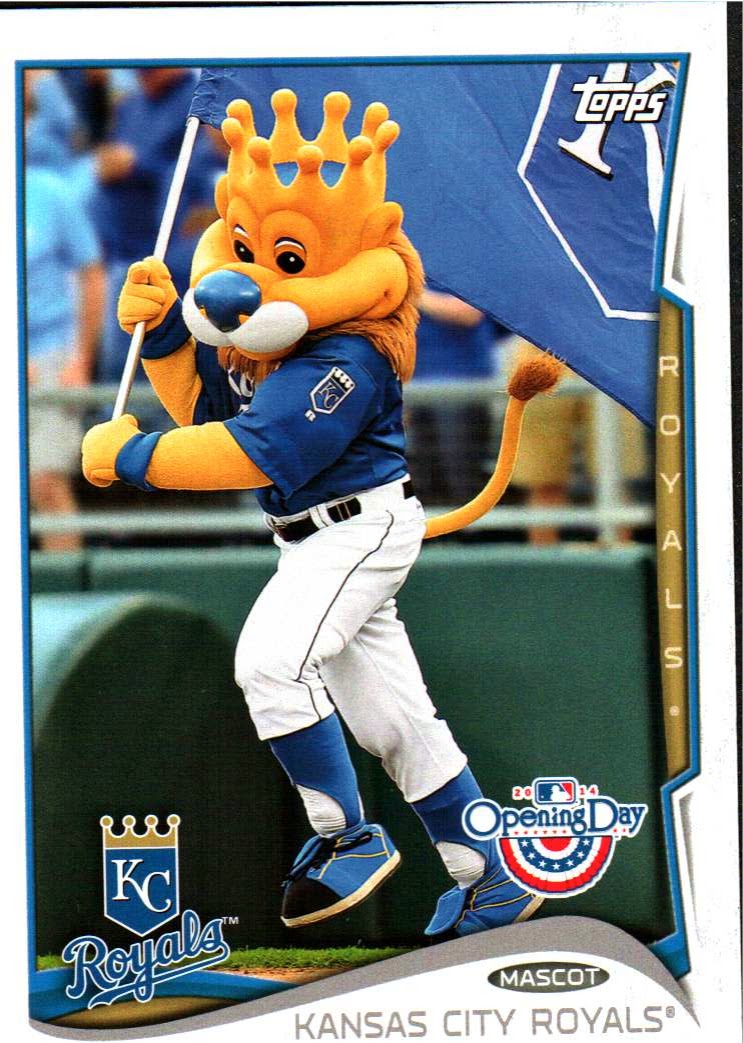 Have you ever wondered what kind of shoes fantastical polyfoam baseball creatures wear? 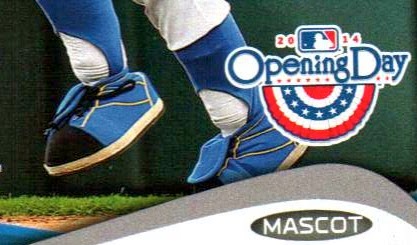 Well now you know. Topps, Always Bringing You Close To The Game.

These days of course, there can be no Base Cards without a Parallel: 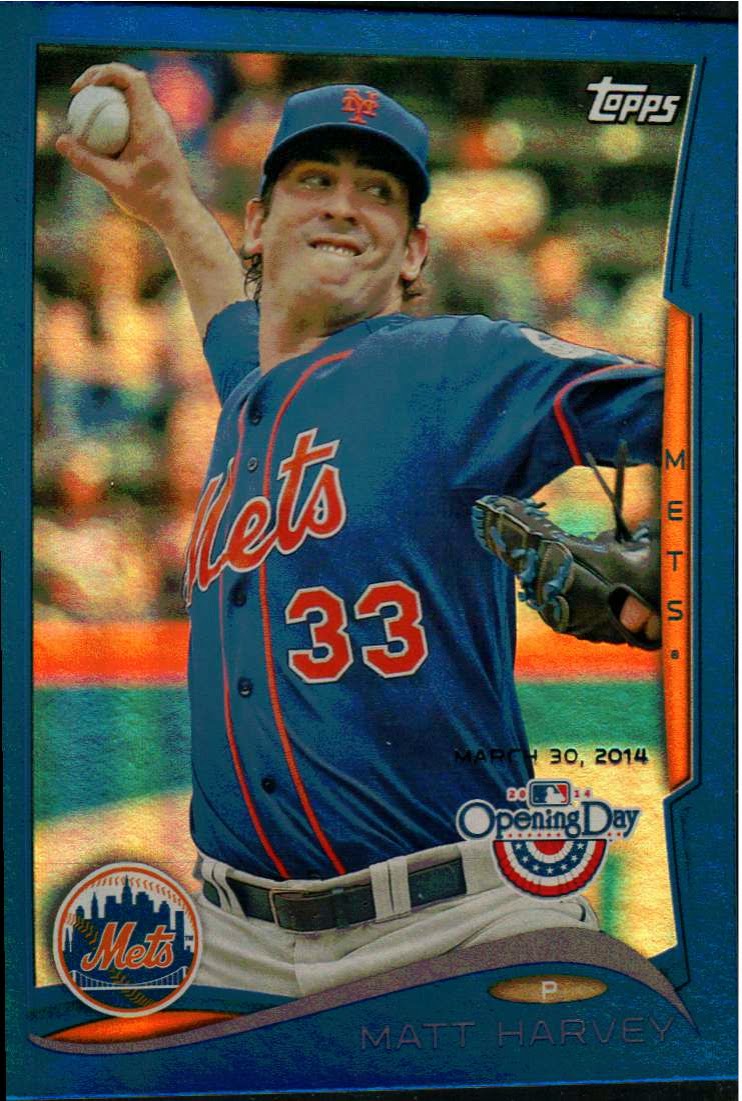 Mostly a pleasing card actually. After looking at the Chrome sets and various other Topps sets the last few years, I'm unclear on what is a refractor and what is a foil card. I think these are technically a Foil. But they are a multi-color Foil, like last year's Spring Fever set. These cards also have a certain heft to them, as they are thicker than  the regular cards. It's almost like they are made out of . . . cardboard.

But ultimately this parallel confirms to me why the 2014 Base design causes people to just think "Blah." A basic element of the Opening Day cards is a lack of foil printing, though that is technically a different iteration of the word 'foil', as it applies to baseball cards. Stick with me now, try and keep up. So the Wave or whatever that thing is on the bottom of the card is now just grey ink. And it's on these blue parallels that you really notice this. Just imagine if the Sea Turtle cards from last year all featured a grey Turtle. Yawn.

Notice how the small bits of Mets orange grab you, especially on a blue card featuring a player in his blue alternate uni? It's almost up to the image on the card to supply some color highlights, since Topps mostly refused to do it, as on this really nice base Rookie Card: 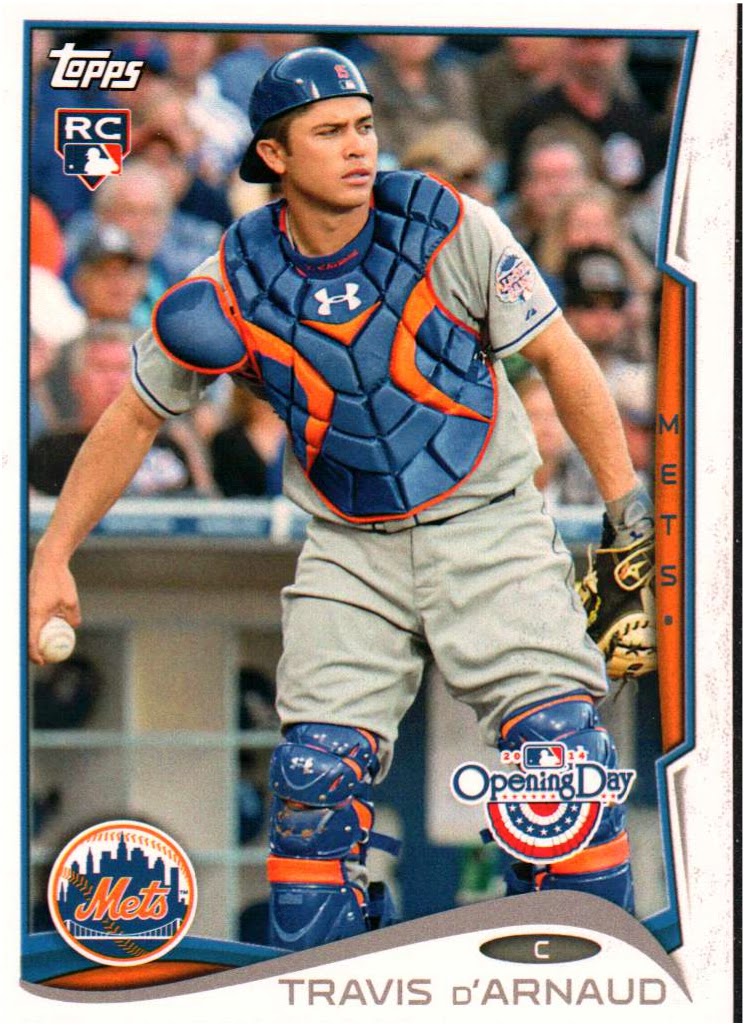 Opening Day is also an interesting rip to see what the Topps photoshop wizards have mocked-up to report last winter's personnel moves of Major League Baseball. 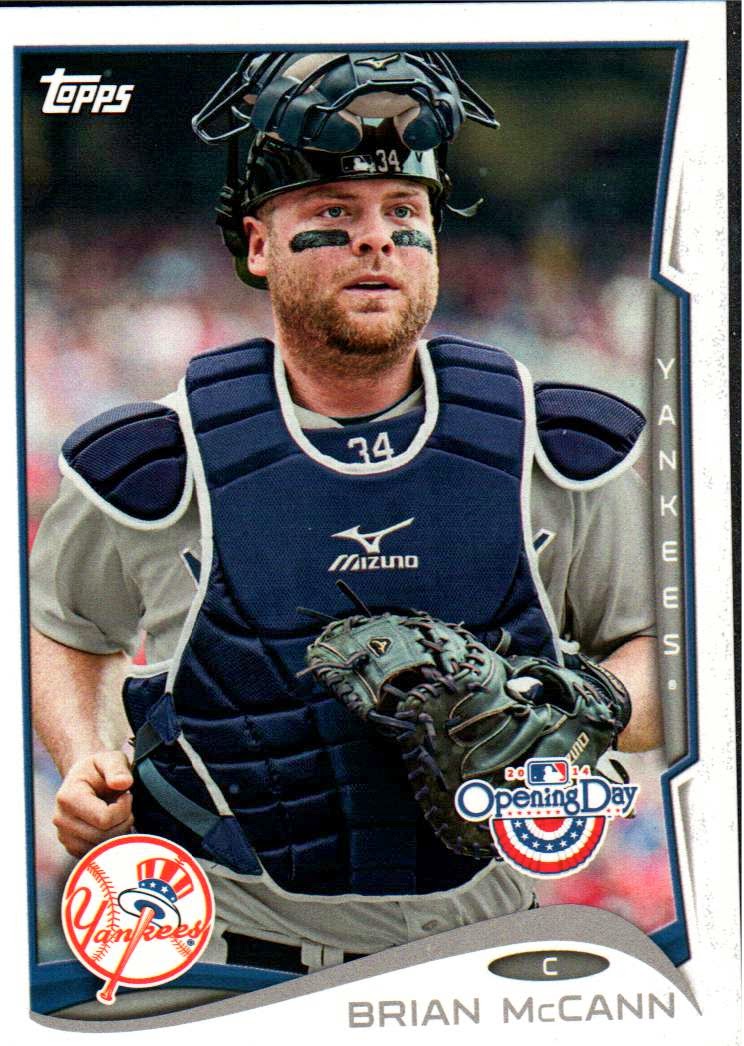 Some of those are easy. A catcher in road greys has got to be the easiest, as long as someone remembers to call up the Yankees to check on the new uniform #, which Topps tightened up on here, getting it 100% correct. (Unless we have a fresh picture from early February?). Or perhaps a player moving from the Cardinals to the Angels is the easiest: 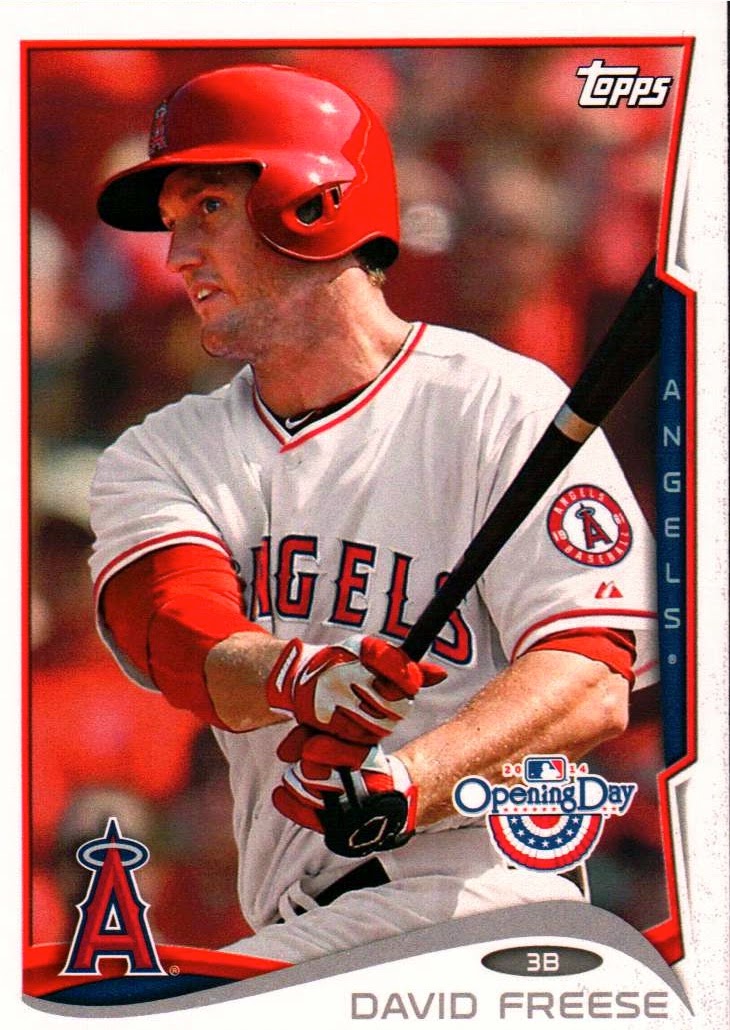 And then some players have bigger canvases to work with of course: 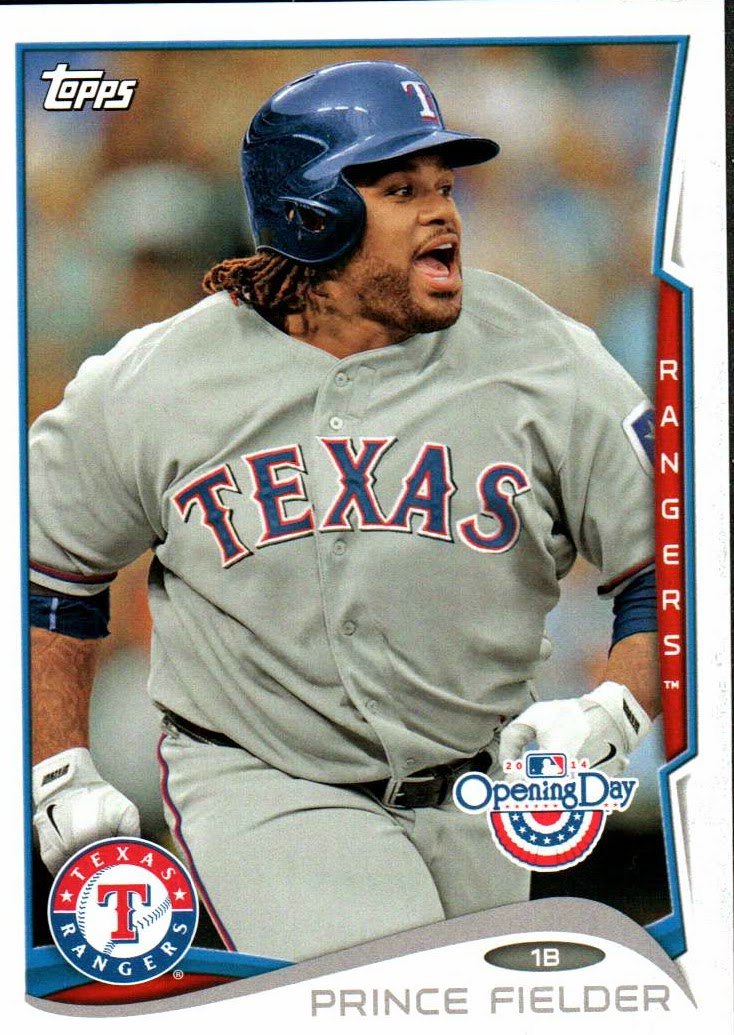 Other times, these projects can be a bit challenging I guess: 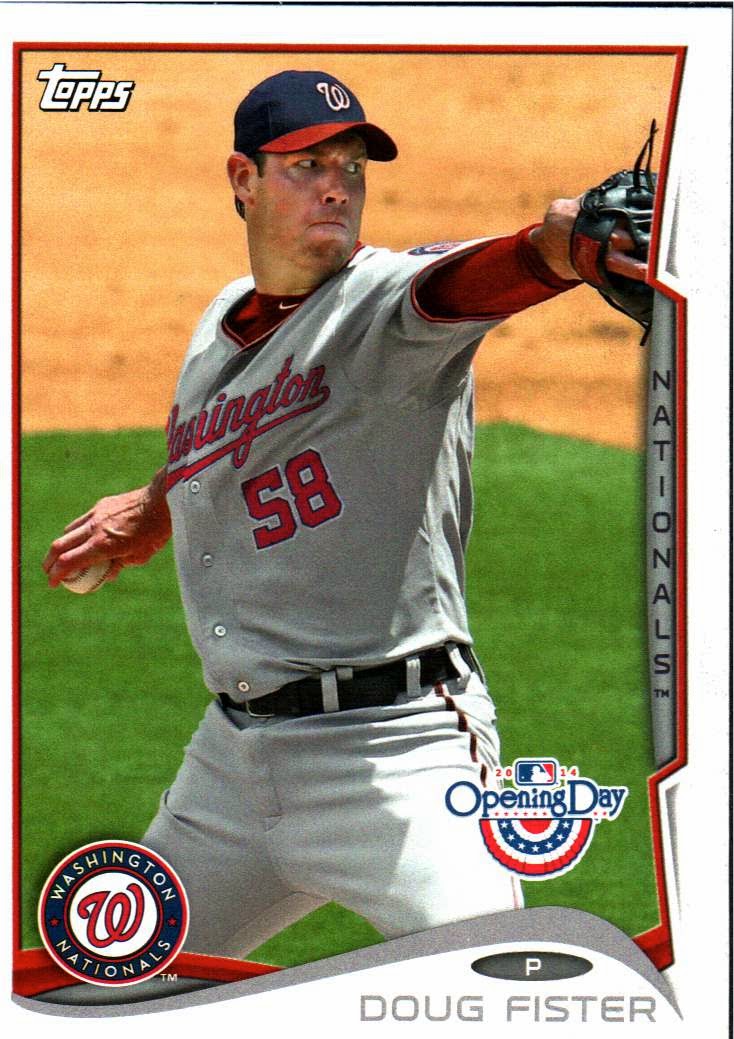 Yes Doug, I would be pretty mad if I was handed a road grey top and home white pants to wear as well.

But ultimately, I like Opening Day cards to help feed the ultimate jones of all baseball card collectors: new baseball cards. By Opening Night, Series 1 cards are so last year already. Probably, some of those photoshopped cards will never be seen anywhere else. And it is fun to get a glimpse of Series 2 as well: 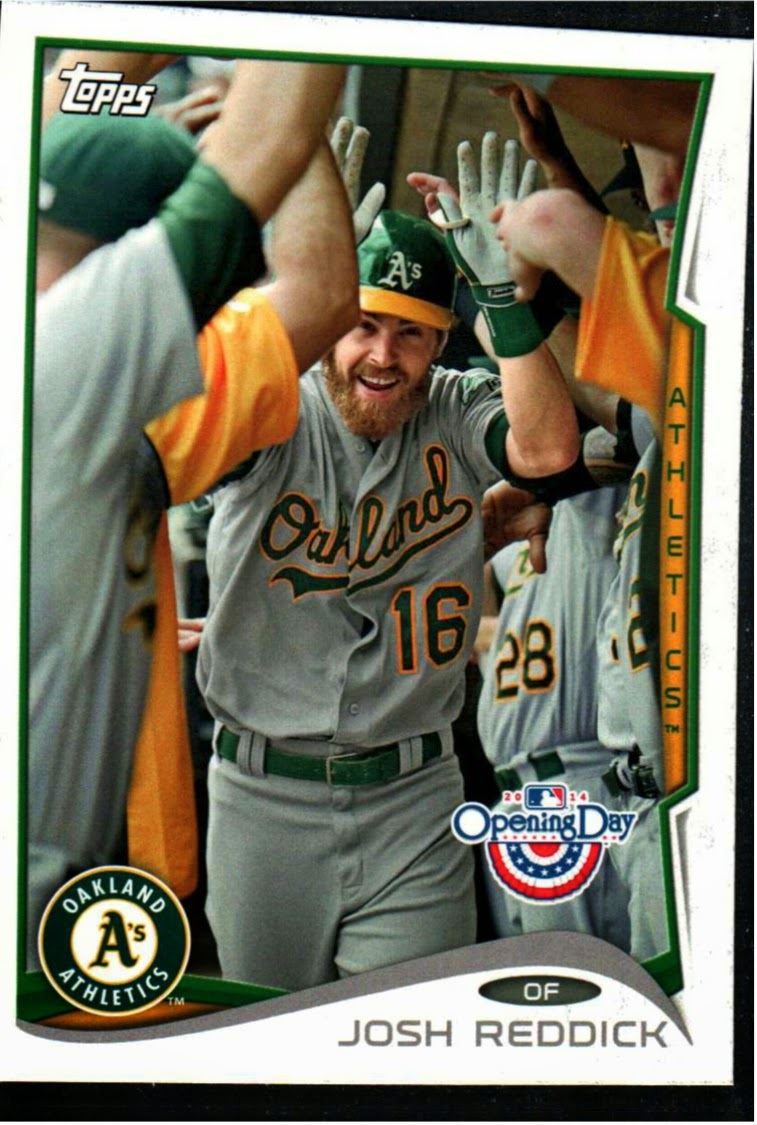 You generally expect Topps to homer it up a little for the New York teams, and that is fine. But lately, they sure do seem to love the Oakland Athletics. I bet they had a tear in their eye at the end of the movie Moneyball too.

Topps did pick up some propps earlier this year for issuing a few tribute cards of retired stars, definitive Sunset Cards with final statistics. At least one of these players is honored again in Opening Day, for the kids: 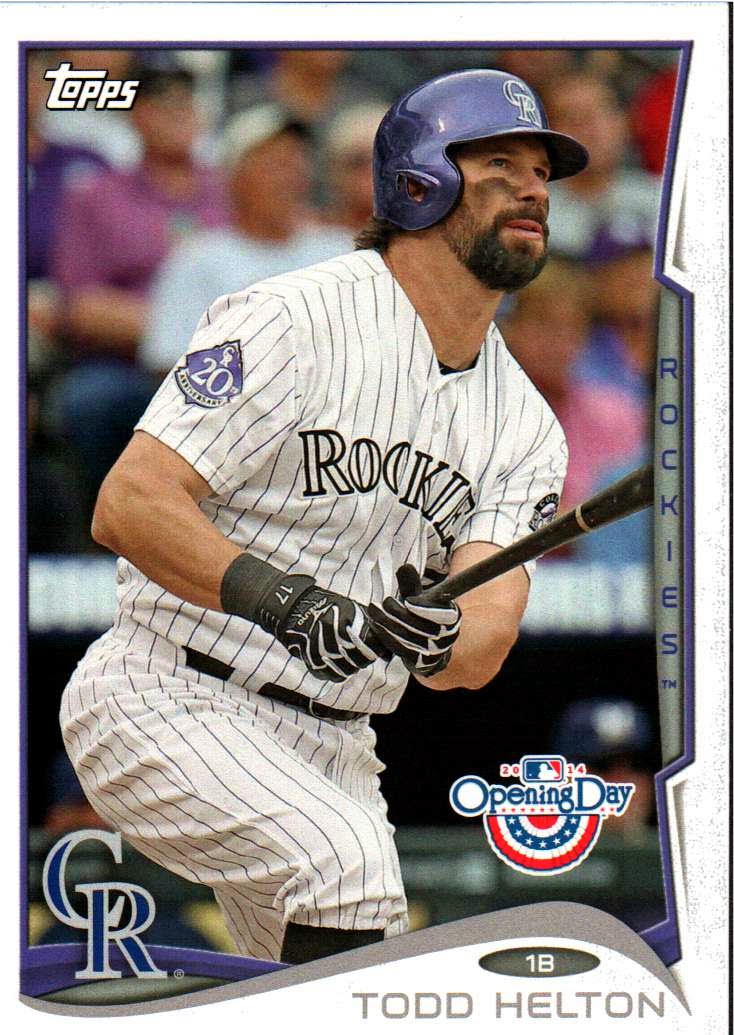 Now I did find a card I think I haven't seen yet, though I haven't been able to stay awake long enough to finish collating / binding / absorbing Series 1: 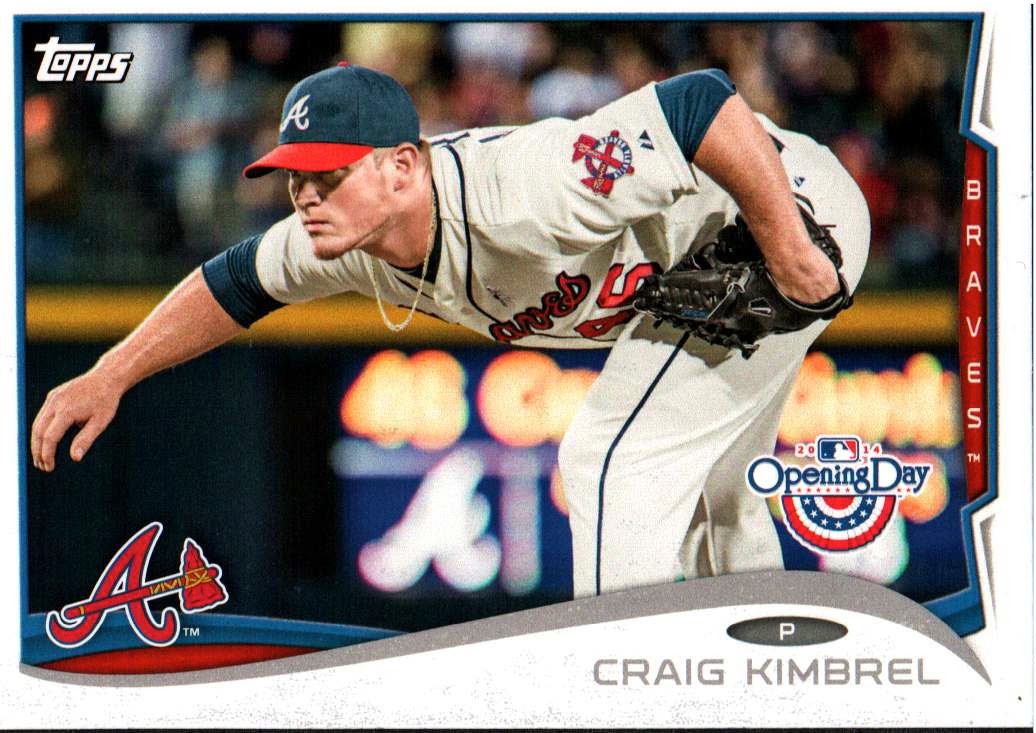 Thanks Topps. Now I'll never ever be able to keep these 2 pitchers separate in my mind until next year's baseball cards come out. 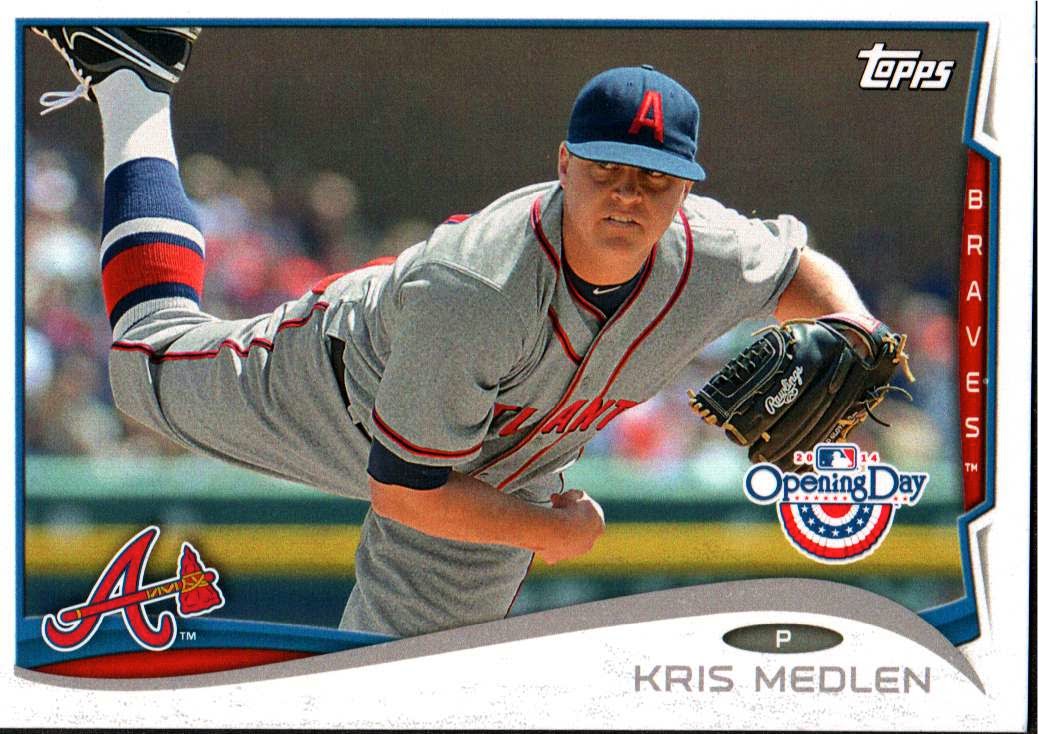 Plus, those cards make me claustrophobic. That adjective just should not be in play when rambling about baseball cards. Please, Topps, stop with these.

But thankfully, buying packages of baseball card images from the Topps Chewing Gum Company and opening them is always ultimately about the simple joy of finding a brand new one that is pleasing to look at. I like horizontal cards. I like baseball cards with pictures of baseball players obviously playing the game of baseball. I like Austin Jackson. It's Opening Night. A new baseball season awaits. Ready. Set. ACTION! 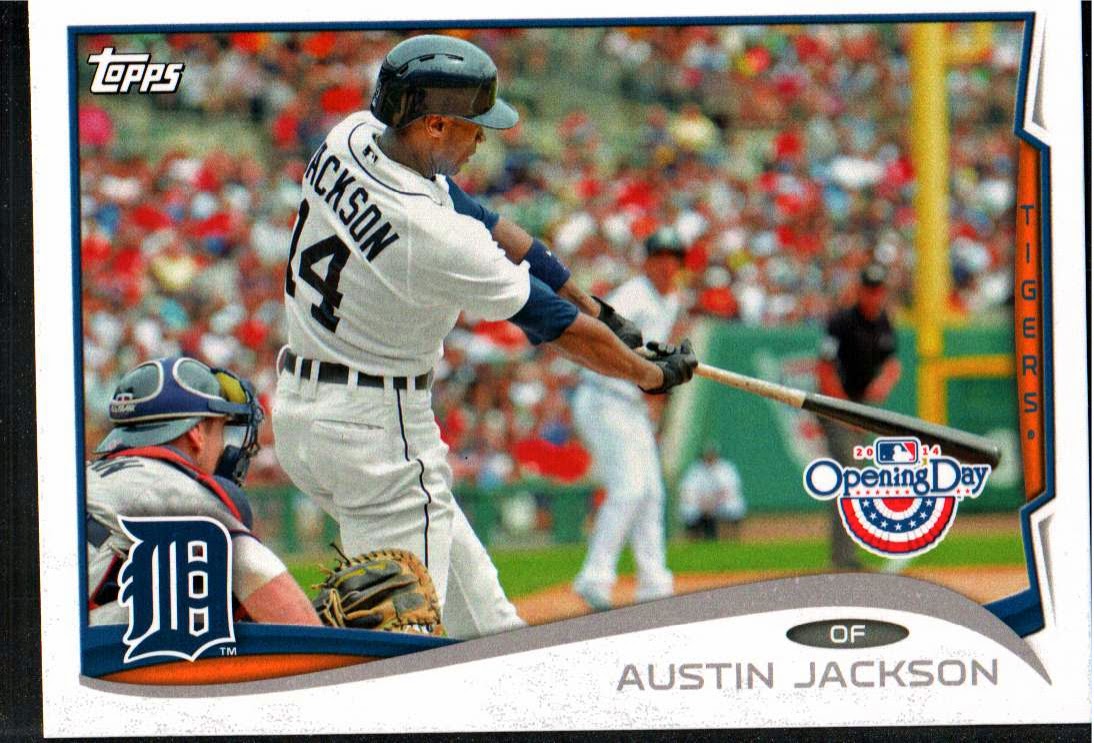