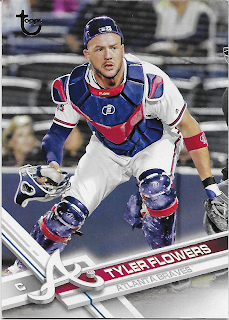 I am not posting this card to brag about pulling a valuable card. It is worth maybe $3, or maybe $6, depending on if you want to wait one year to sell it, or two. At auction, it might only command $2.

I am not posting this card to show off some cool /x visual card. This is a very fine baseball card, don't get me wrong. The Braves sure put together a nice set of gear for their Catchers, and there probably aren't a whole lot of In Action cards like this one, for all Catchers. Flowers has his mask already peeled off for some sort of fielding action on a slow night at the ballpark.

I would have to wonder how many people can recognize the single visual clue about the appeal of this card. Unless you have lucked into one of these - & they are very difficult retail pulls, nor is there one in every Hobby Box, either - or you have a long experience with Topps iconography, the visual clue on this card is sneaky. Unlike other 2017 parallels, and this is technically a parallel, the clue is not in the bottom right corner, but rather in the top left corner.

Here is the back of the card - 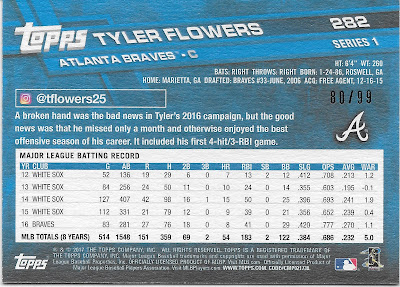 There is just a hint of another visual clue in that scan, something that is noticeable to the eye alone about the card, but is not all that significant as it is something you pick up after already knowing what kind of card it is.

And the back reveals the value of x in the /x = 99. Which then reduces the mystery of which parallel it is down to the solution: this is a "Vintage Stock" parallel.

What I have enjoyed about this card has mostly been just having it kicking around the card desk. It is thick, it is not glossy, it feels like a baseball card should in one's hand. Sadly, it's times of supplying baseball card entertainment are drawing to a close, as my desk must be cleared for 2019 cards, and a pile of receipts that must be interfaced with a pile of brand new tax laws.

Of course, I could receive the same tactile baseball card enjoyment from collecting Heritage, but Heritage has bored me to tears for several years now. The '65 design in '14 was the last one I collected. The original designs from that point, until '71, arriving next year, just didn't have much appeal to me. But I still could have collected Heritage and enjoyed those cardboard baseball cards - if they held any eye appeal in the photos. They don't. Sure, the original cards were largely similar, largely of profile shots taken in Spring Training. But those original sets always seem to have held more innate variety, when I see images of them here and there online. Part of my problem with the photos used in Heritage is collecting portions of Archives here and there over the decade just mostly passed. Those cards use the same photos as Heritage, for the most part.

I do have some hopes up for cards to arrive 13 months from now, in 2020 Heritage.

In the meantime, my hope for these Vintage Stock parallels would be for a big production increase. These cards are inserted in both Hobby and Retail products. Even in Hobby, a small portion of them might be never placed out for sale as singles, if they accidentally get mixed into a stack of those useless "base" cards. Coming out of Retail packs, that is even more likely.

I would like to collect a lot more of these Vintage Stock parallels, maybe even try for a Team Set some day. It would help tremendously if the print run would increase some. The only time it would be all that simple would be right at release, when the greatest quantity of them will be put up for sale. Maybe when Series 2 arrives this coming summer, I can give the Tigers a shot, but it is not something I can do right now.

I hope you have pulled one of these cards in your packs of baseball cards, or will luck into one over the coming months of collecting brand new baseball cards. My advice is to leave it kicking around the 'top' of your collection - literally - the top of that little pile of cards you want to send someone, on top of the cards you want to scan for your blog, the top of that pile you want to find a spare toploader for ... but don't actually put it in a toploader.

Pick it up, read the back, flip it over, re-absorb the baseball picture card, flip it over, re-memorize some fine point of the text on the back you already forgot, and enjoy a baseball card the way they used to be. You will be buying a pack of Heritage again before you know it.