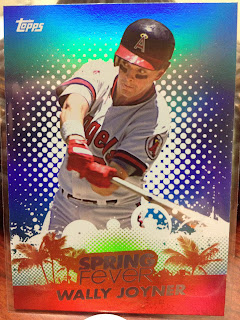 Yes, I have the Fever. There's a Johnny Fever baseball card? No, I don't think so. I'll brb after I ask The Google....

Nope, no Johnny Fever baseball cards seem to exist. Such a pity. Just think of the possibilities on the Jennifer Marlowe super-short-print variation card. In fact, searching for them leads to an image of a 2013 Topps Spring Fever redemption card.

Which is what I have a mild Fever for. So the stars and moon aligned (just past full tonight), and off I went to a very friendly LCS. I'll write up a review of my adventures there later.

I did pick up two more packs of the Spring Fever cards. The shops are pretty generous with them actually. Well, I base that on a survey sample of 2 so far. But both are in a very friendly state.

These two packs increased my set to 38 of the 50 cards. I simply went back to yesterday's post and edited the lists there to keep things simple, silly. Eventually I'll put up full-on want lists, etc.

And I still want to write up an FAQ on trading cards in the mail. You probably know all the answers; I'll have all the questions. Maybe tomorrow.

Of course, anything can happen when you start up a blog to discuss Topps base sets and immediately start by babbling about an obscure redemption-only set. Kinda like baseball - once the first pitch is thrown, all bets are off. 'Cept maybe in a certain dug-out in the 80s I guess.

So of the 3 cards I added tonight, the first was card #1 - Wally Joyner. Well played, Topps, well played.

I saw him on the checklist several weeks ago and had to chuckle even then. Of course this set features both Bryce Harper and Mike Trout, the two "IT" players right now. (Stephen Strasburg seems to be becoming somewhat MIA lately). What are the current Vegas odds Mike Trout is on the box & wrappers for the second series - 3:2 ?

But back in 1986, it was all about Wally Joyner. Angels home games were soon played at "Wally World." I don't know if the hoopla set off a Joyner card printing frenzy - this was long before a hot player generated 50 different cards a year, or whatever the totals might be for those 2 guys on every checklist right now.

Eventually the Absorbine cooled off of course, though it took several years. I was never much of a fan as he was a bit of a Tiger killer. (Walt Terrell no-hitter through 26 batters, cough, cough). Joyner finished with very respectable numbers across his career, definitely ones good enough for Topps to salute with a new card, especially for such a popular player. I don't know if he has been on any cards since retirement, but I suspect not.

Despite this well-deserved new issue, I don't think Topps selected him as card #1 of their Spring Fever set just because he was Wally Joyner. Spring time goes so well with hot Rookies, and I think the set editor at Topps on this one had some fond memories of that 1986 season, amidst all this phenom fever.
Posted by BaseSetCalling at 11:54 PM
Email ThisBlogThis!Share to TwitterShare to FacebookShare to Pinterest
Labels: Spring Fever