So how do you trade these things? 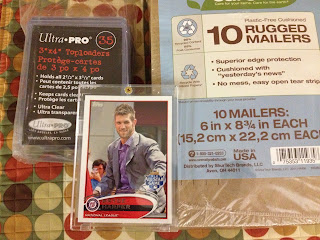 Yeah, I know the basics. First you trade emails, then cards go out in the "snail mail." I did it in the 70s without the email step; I hope I might have some of the little flipbooks left that you mailed around with the trades. That would make quite a blog post.

I hope to stick to the blog standard of one post / day. I had a great post all dreamed up yesterday about Cardinals manager Mike Matheny and his new public call for a rules change regarding Plays at the Plate, and a discussion about it on the Tigers broadcast yesterday. Jim Price, a former catcher, weighed in, and they reported Jim Leyland's take on it. Leyland is also a former catcher and sits on the MLB Rules Committee of some sort.

I also went looking for cards of Jamey Wright, a classic "failed 5th starter, converted to well traveled reliever" trying to make the Tampa Bay team this year, and the Ray's skill at cobbling together a bullpen from the 'scrap heap', an idea straight from my favorite broadcasters. Jamey is probably not regarded fondly in many a baseball town.

Then my internet service went down. I was at a loss. When you live off the ubiquitous "Free Wi-Fi!", sometimes you get what you pay for.

I figured a reliever had to be in the Update Set, and I have the 2012 Update with me right now as I built it over the last several weeks. I couldn't find his card and finally nodded off reading card backs and flipping binder pages. I was right that Wright was in the set, I just didn't make it to his page - his card in 2012 was #US324. It's a nice-ish one; not much to write home about. A blurry Cub is lurking on 1st base, kinda leading-off a little casually, no crouch. Jamey must not have much of a pick-off move. Or he is in the game on 'mop-up' duty and it doesn't matter what the baserunners do anymore. I love 'mop-up', but that's a term from another world. Could be a night card. Heck, it could be Brad Pitt impersonating him, hard to tell: 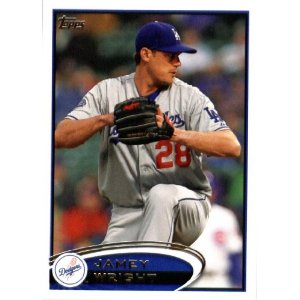 I had spent all day composing the piece in my head while I listened to the broadcast while working. But the fine points are all gone now. And I sure have figured out how to post pics of baseball cards without a scanner.

But I have lots of questions about trading, and I want this post near the top (or the bottom, as the case may be on a computer screen). I'm wondering what the standards are. I wouldn't want to disappoint someone - particularly a card collector. Was the word 'finicky' brought into our language to describe cats, or to describe people who love their......stuff?

a) The Envelope - does it have to be a padded mailer? Or would plain manilla work? Plain white 'bidness'? Would that depend on the # of cards perhaps?

(When I went shopping for mailers how could I resist the brand with 'superior edge protection'? Plus I preferred using recycled stuff whenever I can).

b) Protecting the cards - what is the standard? Toploaders for every card? Or are simple Card Sleeves good enough? Or can you just put commons in the envelope? I think I would probably be fine with that last option.

I just want to know the standards in the trading blogosphere. I like that 'toploader' is considered a misspelled word but 'blogosphere' is not. Anyhow, don't be shy, speak up.

But I have more questions. Let's say I do use that mailer - how much would postage be? I have a very hard time making it into a Post Office when it is open. I work back in the woods you see (now with link). So I will want to buy up stamps in advance so I can drop envelopes in the mail when the Post Office isn't open.

What happens if I use 'media mail', or whatever it is that isn't "First Class" and thus cheaper?

So what's the deal? Maybe this post can get things going. Go ahead, vent a little about That One Guy that sent you cards that showed up all screwed-up now, and how will you ever track down another copy of That One Card? Or shovel compliments on some favorite blogger who does it just exactly perfectly.

OK, OK, kind reader, you came all the way through this boring blog post thinking - that's a Bryce Harper short-print up there! - What are you going to do with it? Why is it there? Why does Bryce wear purple to a parade? Is that the very first cell-phone card? I bet that fan feels a little goofy, if he knows he is now on a somewhat-hard-to-acquire baseball card, engrossed in his phone (with 2 hands no less, must be a gamer, not a baseball fan) for all eternity.

Well a picture of a pack of mailers and a stack of toploaders wouldn't be very exciting, would it?

Yes, Bryce Harper is on the trading block. I hope the Google web crawler extracts that neat little sentence for some internet hi-jinks. I could be as famous as that anonymous fan in the blue shirt.

But there is only one card I would really trade it for: 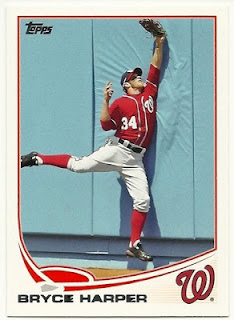 No, I am not a Bryce Harper fan (or foe, I just don't follow the NL East much). I am simply chasing the 2013 short-prints, as I prefer action-shot baseball cards, and Topps is all about that these days. Which is a big reason I have returned to collecting baseball cards.

Normally I'm not into attempting to acquire rare cards. In fact, I have been participating in the hobby in an exclusively non-on-line way the last couple years, as you'll discern in blog posts to come, and this is the first I have heard of short-prints actually. So I figured Update series cards should be printed a little less than The Topps Set, and a good supply of extra '12 Updates will make for good trade material. Yet another future post for you to anticipate.

So I would like to have all the new SPs (only 2 pulls so far for me - Kemp and Youkilis), and it looks like Mr. Harper will be the hardest one to acquire. Unless of course he hits a severe sophomore slump from Opening Day till the All-Star Break. Maybe I should just wait and see on that. But if that were to happen, his 2012 Update set Short Print will be equally worthless, so I figure it's best to just try for a simple fair trade on it now. It might take that long for my blog to have enough readers to get this done..... ???
Posted by BaseSetCalling at 11:09 PM
Email ThisBlogThis!Share to TwitterShare to FacebookShare to Pinterest
Labels: 12 Update, 13 Series 1, Dan and Jim, FAQ, Let's Trade, Short Prints