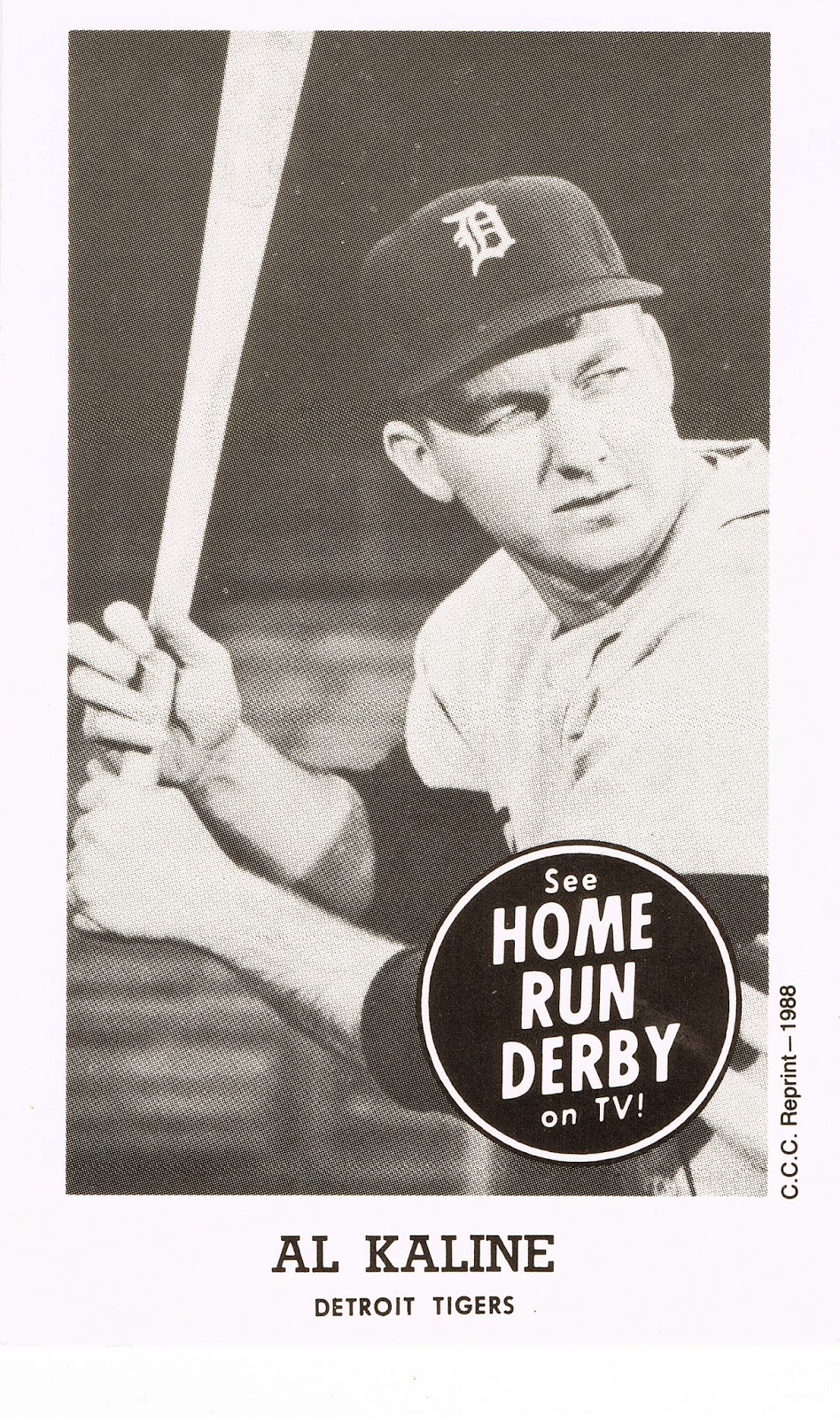 This is another fun little piece I picked up at the LCS a few days ago. It was even a freebie, as I had already committed to relieving the owner of some other items by giving him real money for stuff no one else hardly wants - junk wax. It might be awhile before you see that junk, because I have a fun construction project to complete before showing it off.

The other reason it was free was the fine print there along the lower left corner of the image, which reads "C.C.C. Reprint - 1988", which was certainly nice enough of the reprint company to include, back in the 80s.

Of course, perhaps this isn't a true oddball, as eBay searches for these items work better if you use the word "Postcard." But this is is still a baseball picture card then, methinks, even if not issued by T.C.G. Co.

Originals will set you back hundreds of dollars, but these reprints are just a buck or so, before shipping. Or free at your Friendly Local Card Shop, perhaps.

This item came with one other helpful item I had thought to work into a post along with it, but when I learned tonight that the first game of the World Series won't be played until next Tuesday - over 100 hours away! - I figured I'd better get on the wire and drum up some baseball entertainment to tide you (and me) over. So the bonus item will have to wait.

OK, OK, now let's get to the subject at hand here on this promotional type postcard: HOME RUN DERBY.

It's the 21st century now, and any product of all of human creativity, ever, can be summoned in seconds:


This was a delightful find for me. I don't live with a super-deluxe Cable TV package. In fact I hardly watch TV at all, which is especially true now that baseball has completely disappeared from broadcast TV, as it has moved to Fox Sport1 rather than regular over-the-air Fox stations. No more Game of the Week. Boo!

Thus even at home baseball is mostly an audio experience for me. Tonight I listened to the final NLCS game on the San Francisco station, courtesy of my phone rather than atmospheric bounce of the powerful AM stations I would use when I was a kid. And thus I got to hear the great broadcaster John Miller call the top of the 9th, 2 outs, bases loaded. Taveras hits it back to the mound and "Affeldt races to the bag. Touchdown!"

So I still thoroughly enjoy baseball on the radio. But I do also like to see what baseball looks like, which is where baseball cards come in.

But I could not resist the call of this baseball postcard, and I was rewarded with the 24 minutes of baseball sort of history embedded just above there. That video is of the Hank Aaron vs Al Kaline episode of the Home Run Derby TV Show, and it was an enjoyable 24 minutes. Aaron and Kaline were particularly pithy analyzing each other's swing  - I could instantly see what they meant. This is something I do lose just listening to games on the radio. It was just so cool to listen to these Hall of Fame players talk at all, back in 1959, still in their 20s. My baseball cards sure don't talk, well at least not out loud.

All the rest of the details on this show can be similarly summoned in just seconds; heck if you look through the settings on your computer long enough you'll discover that the last operating system upgrade you did probably added Siri-style voice recognition even to most PCs now. So you can just say Home Run Derby TV Show Wikipedia entry out loud and get all the answers to your questions quite quickly.


I mean how cool is that?

Actually, I think watching too much of these would wear you down pretty quickly, they have been broadcast a fair bit already on ESPN Classic over the years, so some of you might have already fallen asleep now. This is just black & white baseball shot live with just a couple cameras, no instant replay, and isn't actually a baseball game of course.

I also learned that there was a Wrigley Field in Los Angeles, and if you've ever seen a classic baseball movie shot in black & white, it was probably filmed there.

The things you learn from these baseball picture cards...