There is of course a wide variety of baseball player picture memorabilia products out there. One of my favorites is probably the most overlooked in this oh-so-grown-up now "hobby" - 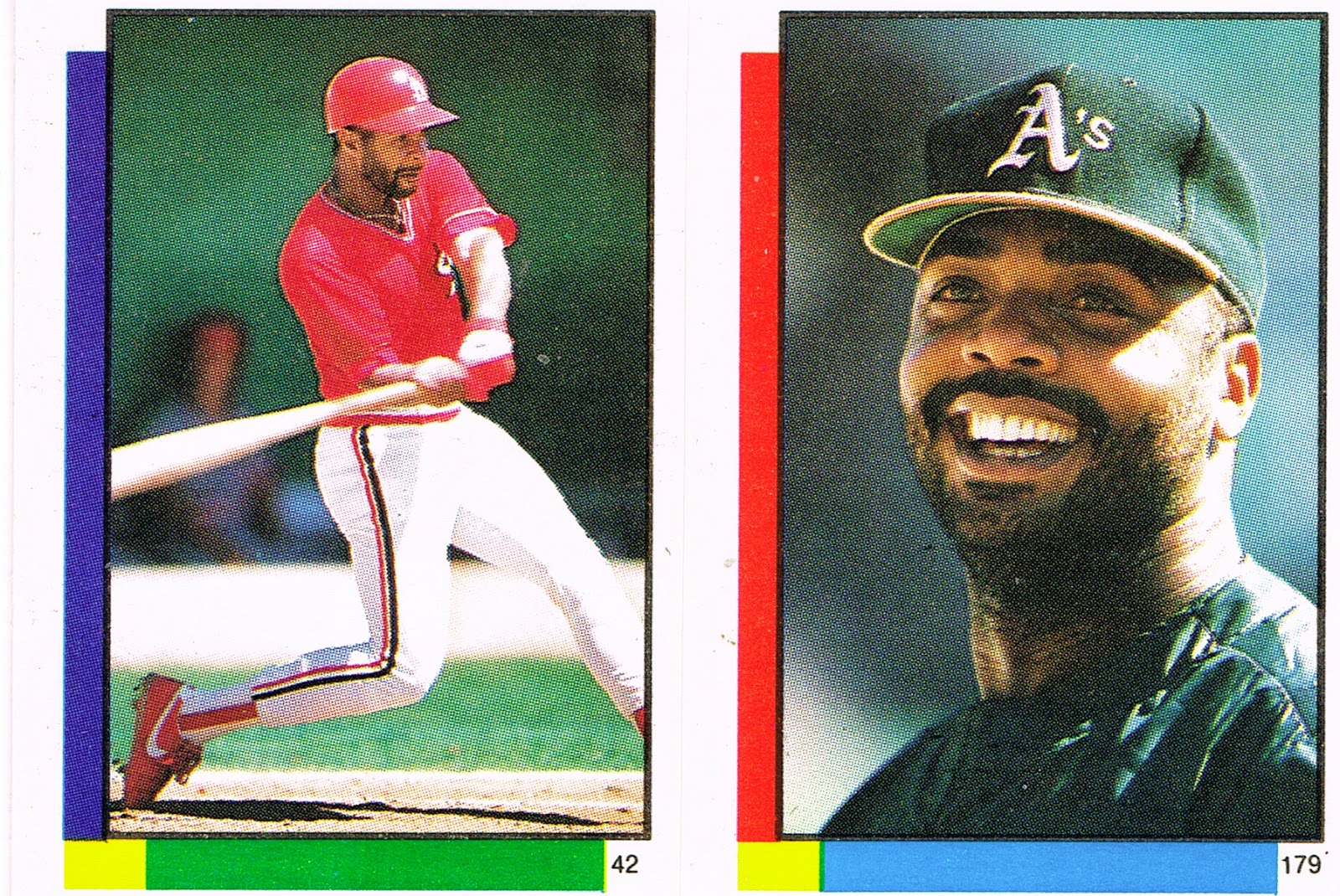 These stickers I picked up the other day do that especially well. These are the 1990 edition from Topps, perhaps their most unique sticker set.

I haven't assembled a collection with representatives of every year that Topps made these, though I can see my baseball player picture collecting tastes will lead me to that point.

So I'm not positive that these are the only dual image stickers issued (they are perforated in the middle and that is two stickers there, on a single backing piece we'll get too shortly).

I have a stronger suspicion that this might be the only set of stickers that recall the design of the Topps baseball cards that year. Normally with Topps stickers, you get either a white border for all of them, or a combo of Red for the AL players and Blue for the NL players. With special exceptions for the All-Stars, most years.

But in this case, I find this design much superior to the usual choices from 1 Whitehall Street. And by that I mean also superior to the base card design that year. One day last season I buried my thoughts on 1990 Topps in a long wordy word post about 2013 Archives, and then added to those thoughts in the comments after a smart comment from the Night Owl. He thought 1990 = Lichtenstein, I think 1990 = Mondrian. These stickers definitely support the latter, though you can't argue against connecting the dots to Lichtenstein (no, not the country, click around and learn something), either. I prefer these stickers to the baseball cards because Topps exercises restraint on how many colors they add to the frame, rather than just seemingly randomly rainbow-ing up the entire frame the way they did on so many 1990 cards. And they are still color-coded by League, even with this touch of Art on a 5¢ sticker.

I have always liked the variety of baseball picture card tropes in most Topps products, and this sticker set is no exception. Up there on the first one on to the scanner, we've got a sweet shot of Ozzie Smith, In Action, probably about to smack a pitch left up too high in the zone, it looks like. And I always like a Smiling Card. Or sticker.

Let's see what other baseball card archetypes I can find on these tiny (2" x 1.5") baseball player picture products: 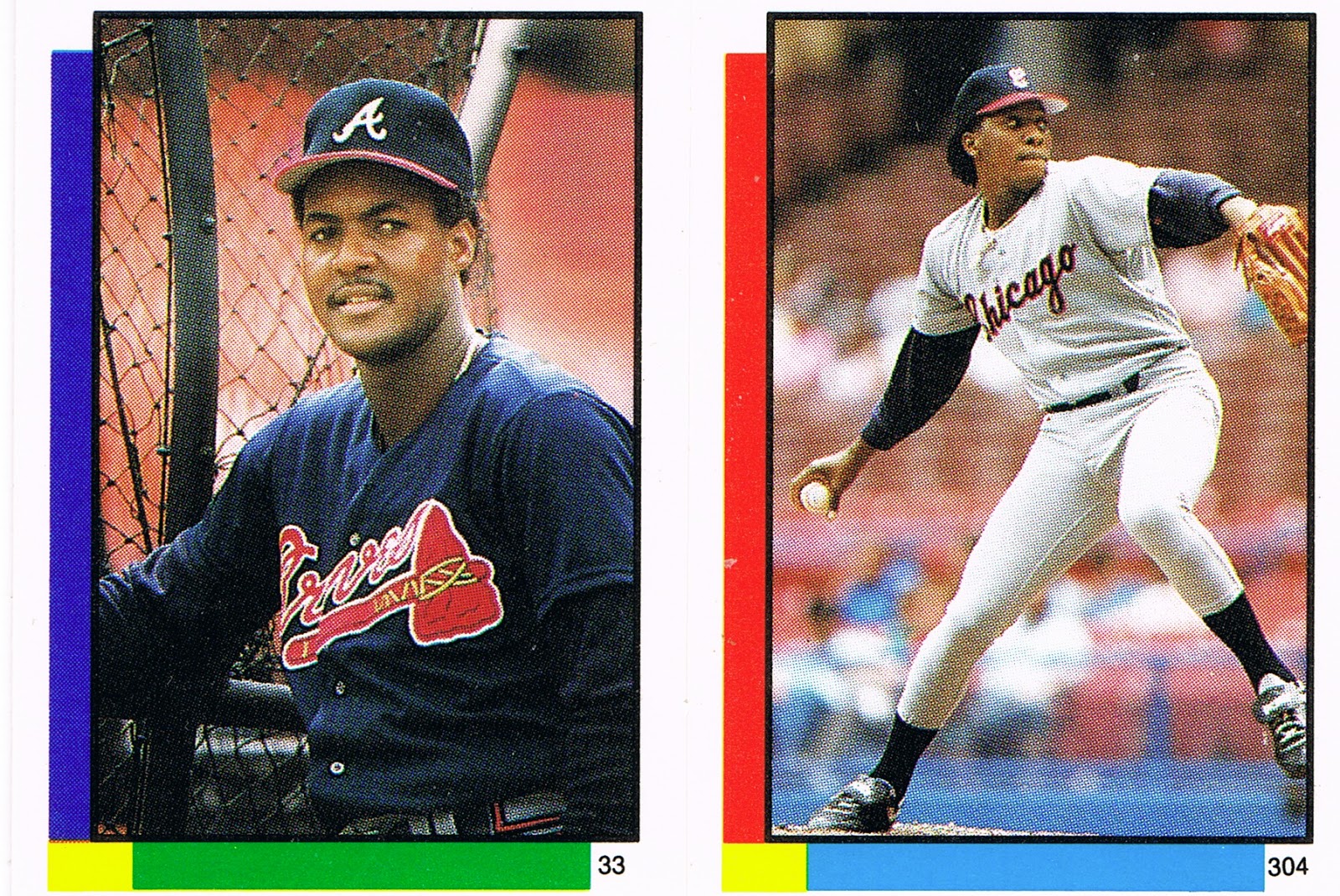 Here we get a nice Batting Cage shot of Andres Thomas, while Melido Perez gets a nice Leg Kick pic as he pitches in some extra-empty weekday game somewhere. Who? Yeah, me neither, though when I cheated via today's online checklists, I did discover that Thomas was a former Topps All-Star Rookie (on those terrible wood-grain cards in 1987, which is why I probably forgot him), and I think Topps always kept those players on their checklists ever after.

You may wonder why there would be a Topps baseball memorabilia product that doesn't identify the player in the picture (not even on the back of the sticker), which is pretty rare in the world of Topps, though I have always liked their occasional such efforts. Keep in mind that these are designed to be put in the official Topps album each year, where the player's name would probably be printed clearly underneath the empty frame where we are supposed to stick the sticker.

And there are plenty of other classic baseball photo styles: 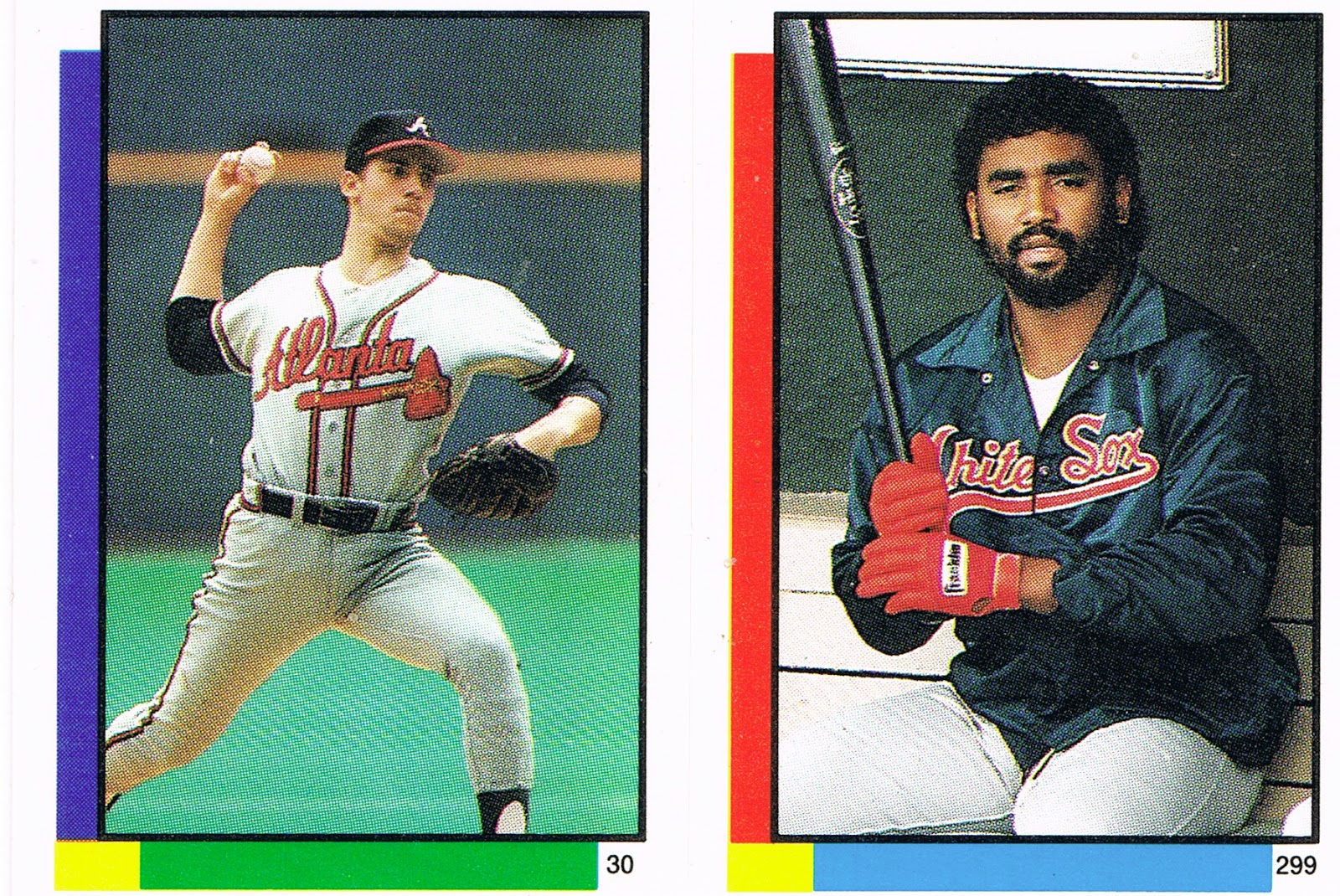 That's Ivan Calderon hanging out in the dug-out showing off his snazzy red batting gloves. A young John Smoltz is not impressed. Dug-Out cards catch everyone's eye, but I have an eye for certain other things on my baseball picture deals: 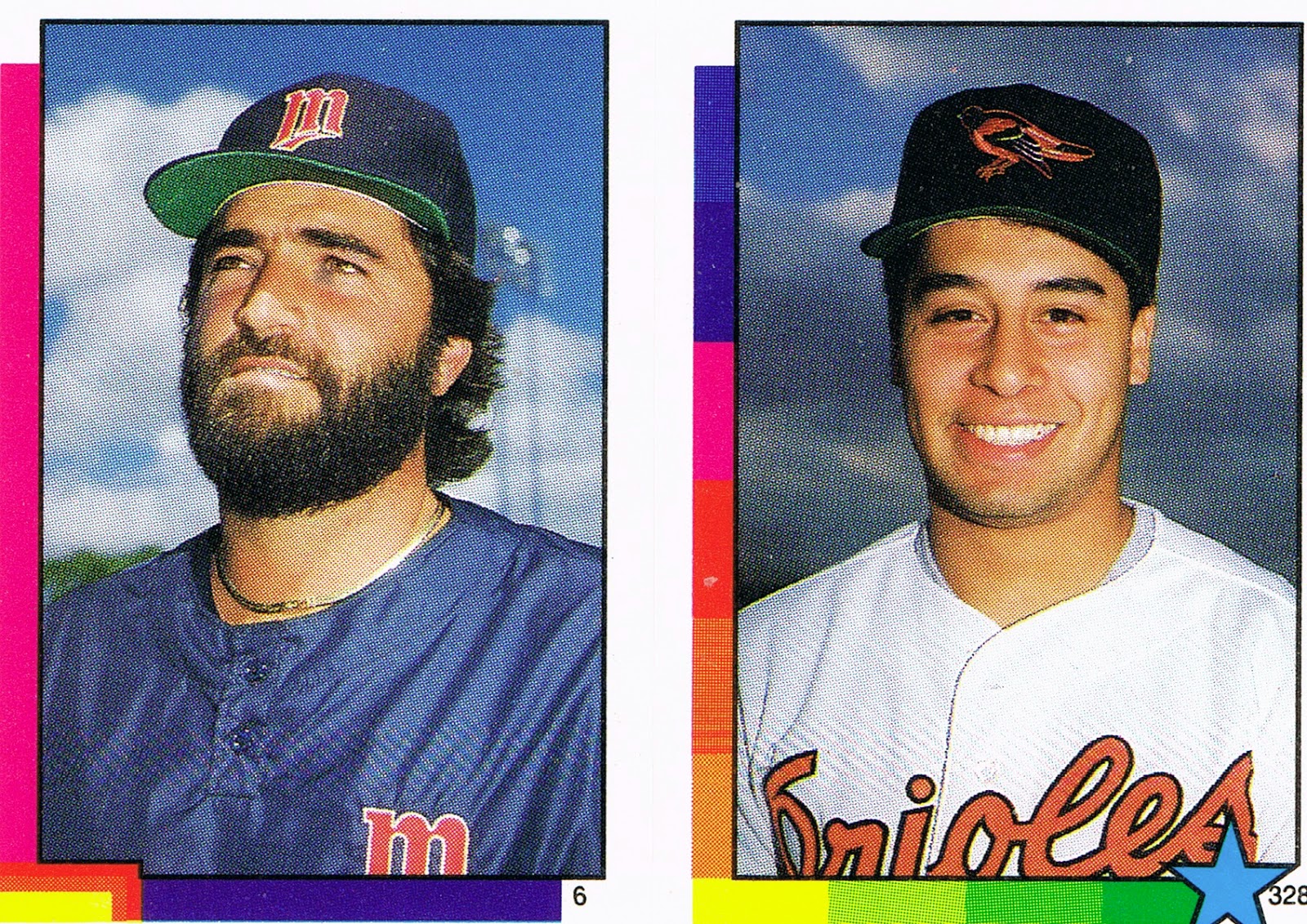 Light-towers! Clouds! Storm clouds, at that. Nice stuff. What's up with Kent Hrbek growing a beard and Denny Martinez shaving off his mustache though? No silly, that is Jeff Reardon there on the left, and Craig Worthington on the right, the last sticker # in this set, as it turns out.

Did I finally pull an All-Star sticker there with the special blue star (for an AL guy? actually, all the little stars are blue, even for the AL), while Topps has fun using every part of the color wheel their printing machine had that year.

No, the All-Star players are on their usual special Foil stickers: 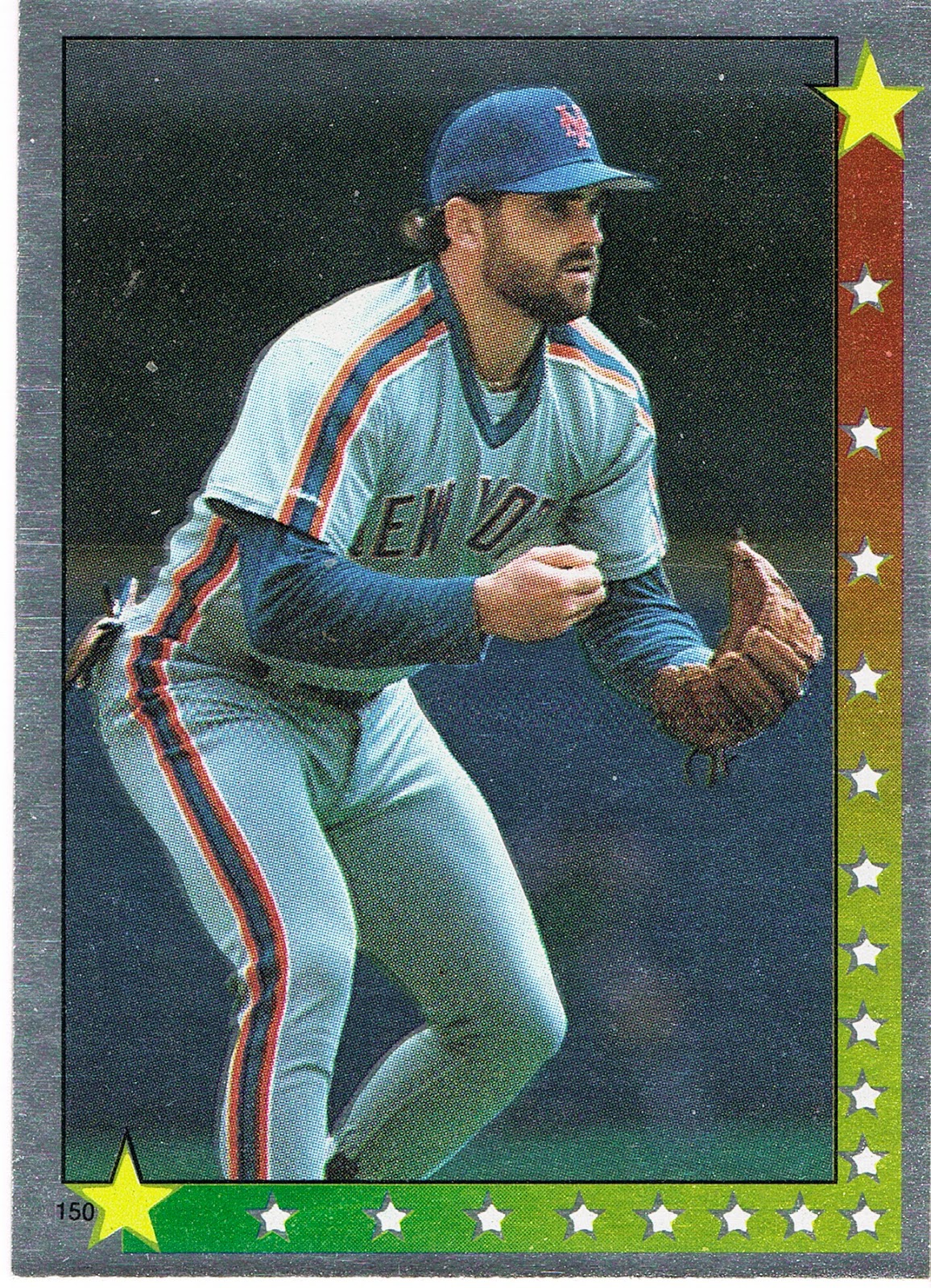 Though I appreciate the rare fielding shot for an All-Star baseball player picture thingie, I find the 1990 All-Star sticker effort a little …. meh …. even with all those stars, in part because the foil washes out the wonderful color present in the rest of the set. (Shades of the mmm, shiny baseball card products to come in the rest of the decade, and decades ever after, I guess.) The AL All-Stars get the same exact colors and stars, except theirs are on the left of the frame. Though the All-Stars do get their own complete 3" x 2" sticker.

So what is going on back there with Craig Worthington's special blue star? The answer is another possibly unique feature of this set - the presence of the Topps All-Star Rookies, though without the Rookie Cup, or the statue. Worthington made the team at Third Base, after belting 15 Home Runs in 1989, easily his peak year in the majors. Perhaps the sticker album noted his Topps AS Rookie selection, I don't know.

I like how the All-Star Rookie all-the-colors border somehow leads to his neighbor's frame getting an extra boost as well, as on this likely example of the ultimate Star Power sticker in this set: 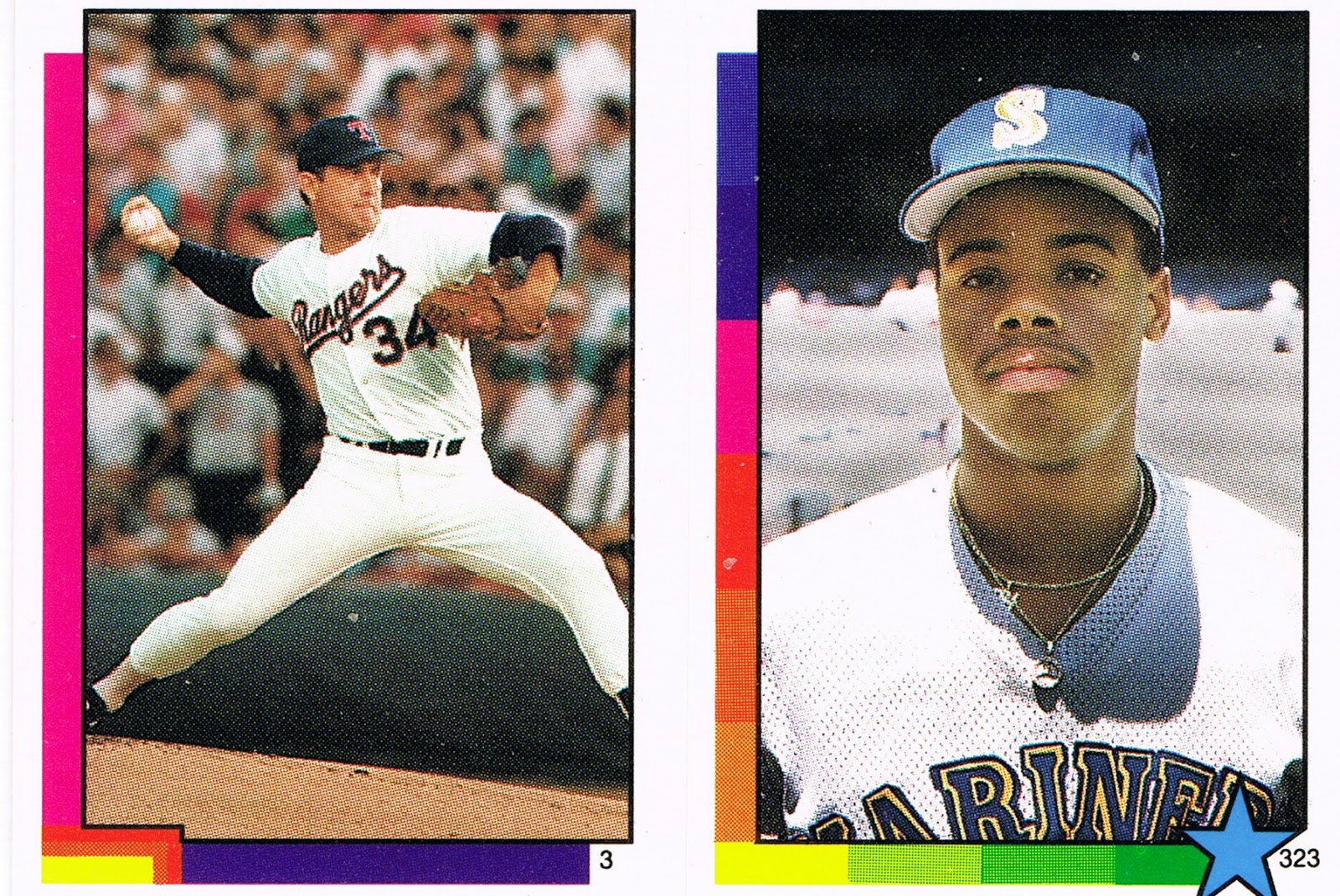 Imagine pulling that combo the year after Griffey Jr. rookie-card mania. I'm sure the set constructor back in Brooklyn grinned with delight pasting up that one. And no one had to cheat with their album or some computer checklist to figure out those two guys, even though as I mentioned, they aren't named on the back.

So what was on the back? Let's take a look: 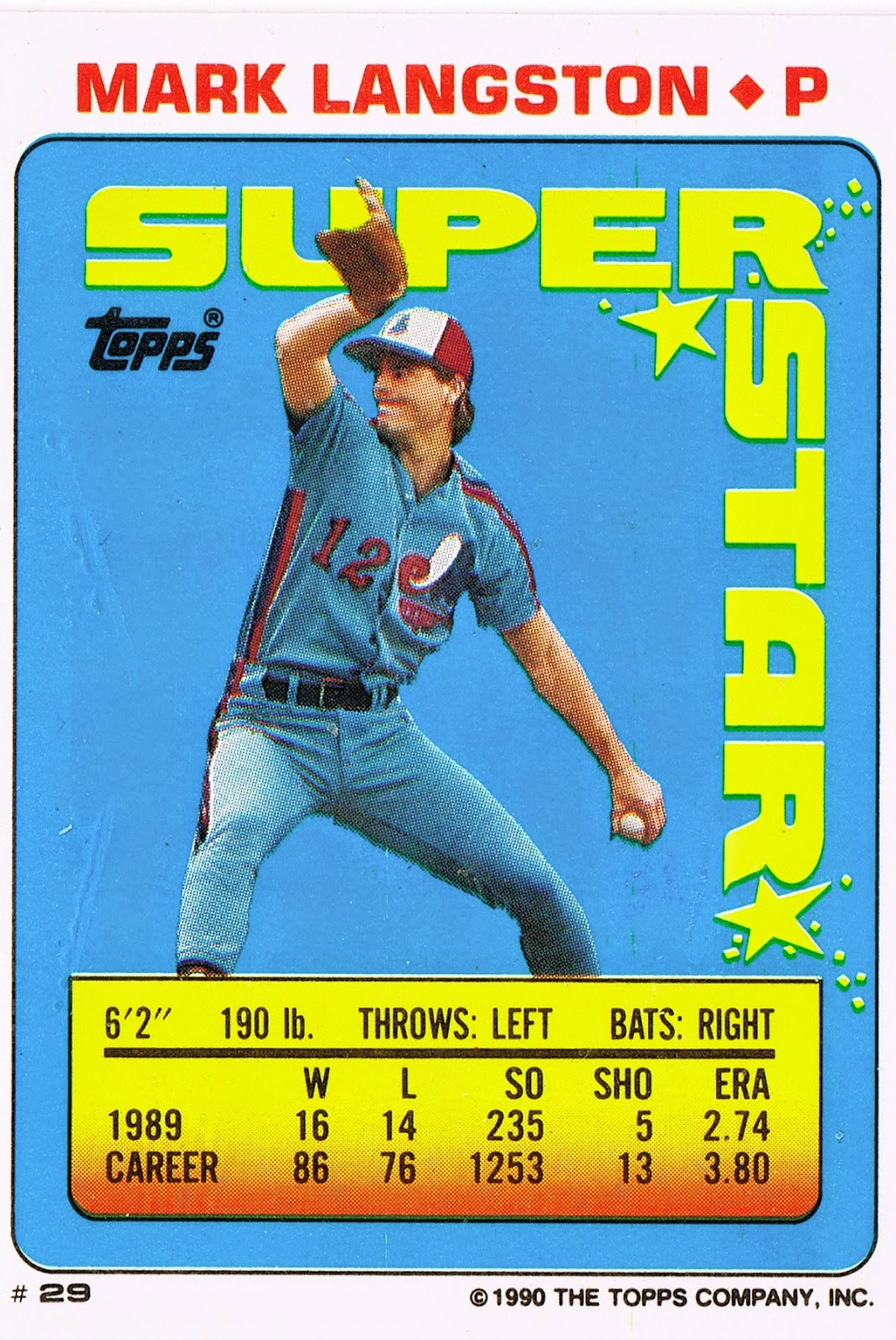 More Boom! Check it out kids, you get two stickers on the front, and a baseball card on the back!

And I get to type this again: Miiiinnnnnnnnnniiiiiiiii!

Maybe one of the most unknown mini sets Topps has ever made. The 1990 Superstar Checklist included 66 players, evenly split between the AL and NL, and of course with a special entry for the Checklist sticker card, #67.

I probably won't chase and binder this esoteric mini set with my snazzy new mini card binder pages, as I've never liked baseball picture cards that strip out just the baseball player from the original image; again this foreshadows what was to come in the world of baseball cards the rest of the decade and beyond. Though now that I think about it, perhaps I'll just binder up all the pitchers in this set...

I picked the Langston card to show you due to that cool stat there. Amidst space for only 5 stats, Topps included SHO (shutout), a neat illustration of how the game has changed even in just 24 years. I thought it was amazing this year when Tigers pitcher Rick Porcello pitched sequential shutouts, surely one of the more remarkable pitching performances of the season. 2014 baseball cards no longer even list CG for complete games, and I have to wonder how long it will be before Complete Game shut-outs might get their own special highlight card, they are so rare these days.

Even in 1990 though, a Closer makes this short checklist. I pulled Baltimore Oriole Gregg Olson, who instead of SHO, gets his 1989 SV (saves) stat listed = 27. Another illustration of the game changing over time; though Topps used to issue "Leading Firemen" cards even in the 1970s, I wouldn't expect to see a reliever on any of their special short checklists before this.

Some things never change though, when it comes to special checklist construction: 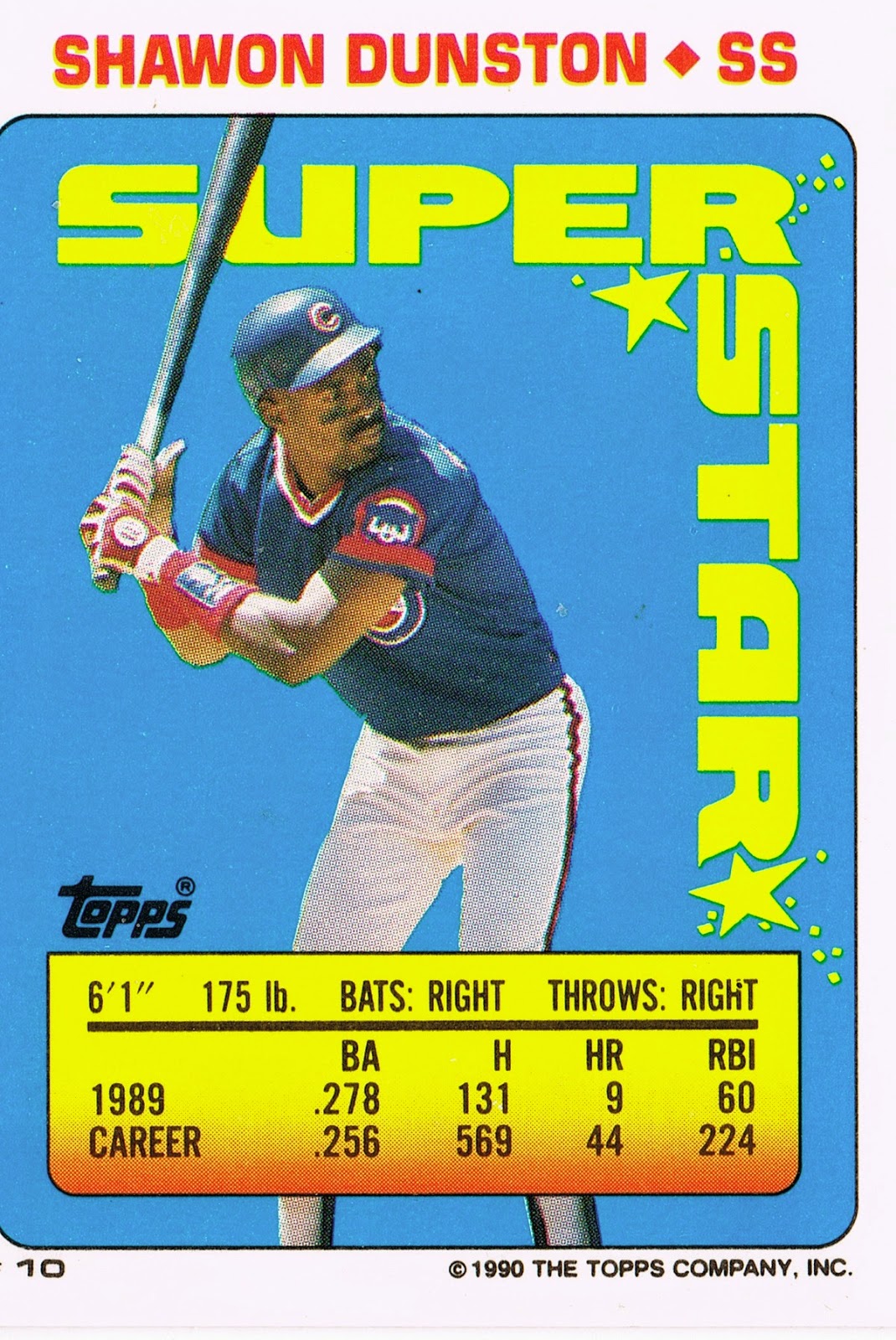 Yes, in 1990 any modestly successful stat line as a starter for the Chicago Cubs made the player beloved nationwide, though I should note that Dunston did make the NL All-Star team in 1990 for his second and final time.

But did the card back match the front? Nope, that wouldn't be possible with 67 card backs and 164 card fronts (I would expect some double-printed backs). Here is the front, i.e. the sticker, affixed to SuperStar Fred McGriff's entry in that mini checklist: 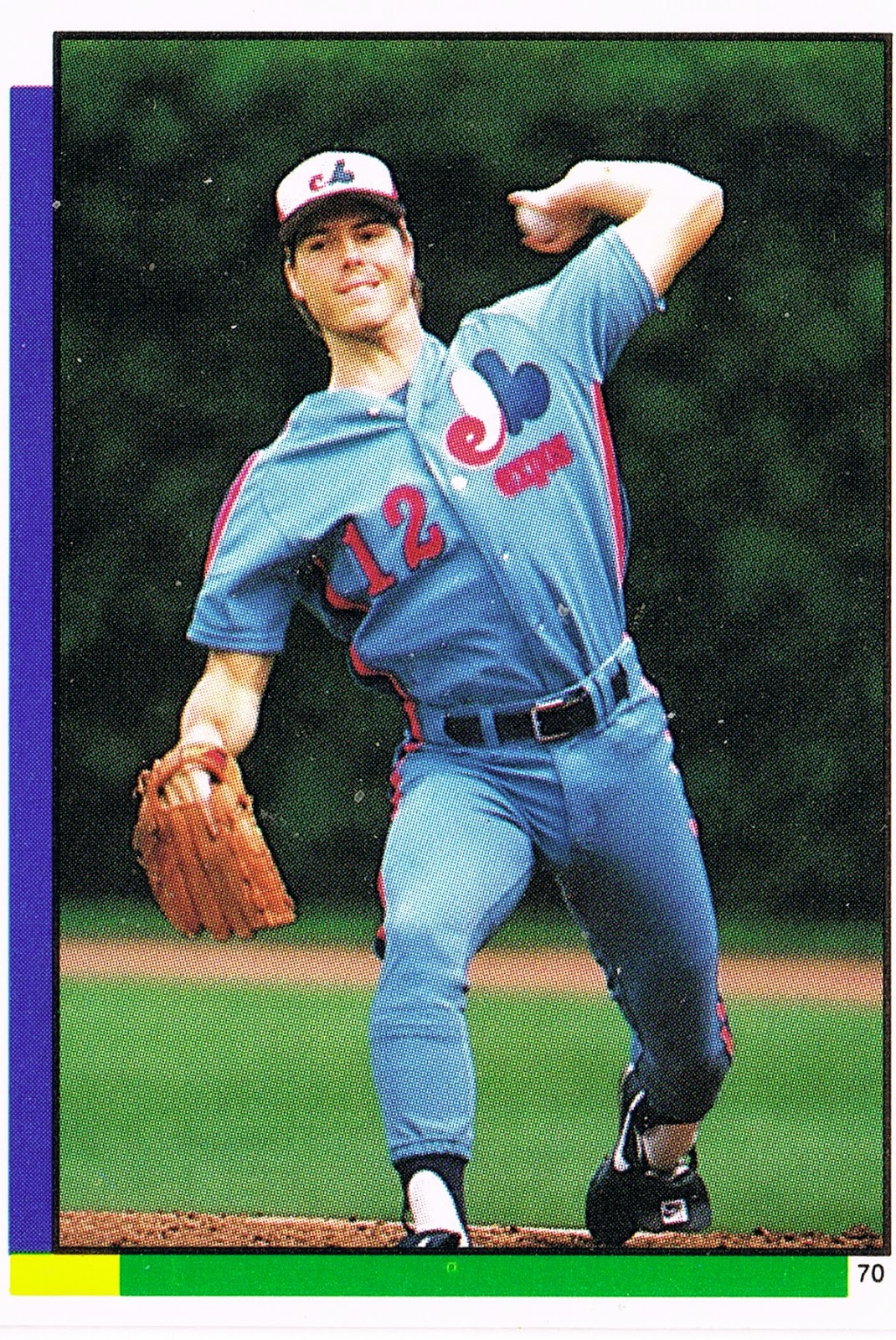 So, no, that is not the front of SuperStar Mark Langston' card, but it is a nice regulation baseball player image of Langston pitching at Wrigley, I think, nearing the end of the Powder Blue era by this point. I can not determine why some non-All-Stars got full size stickers all by themselves….what Topps set would be complete without some mysteries?

I do like all the ones I pulled, including this one: 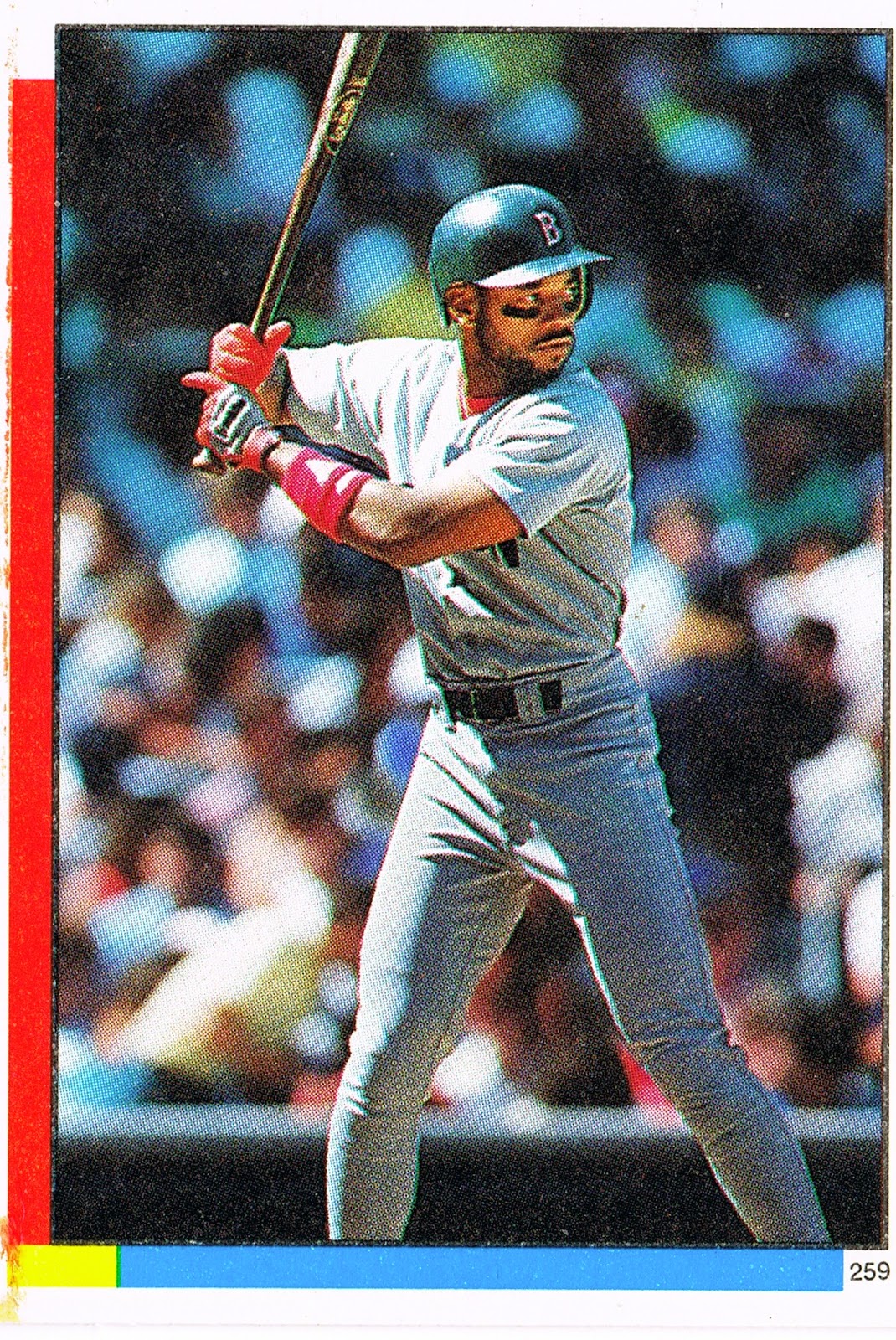 That's Ellis Burks, batting as the shadows creep down from the Upper Deck. Apropos today, a day of two shadowed games in Kansas City and San Francisco. I again like how the scanner highlights the shaded portions of the image better than the actual card, err, sticker does.

Unfortunately I only pulled four of those full size / mini stickers (so far…), and only have one more baseball pose to share with you, though I don't have a cheeky name for it: 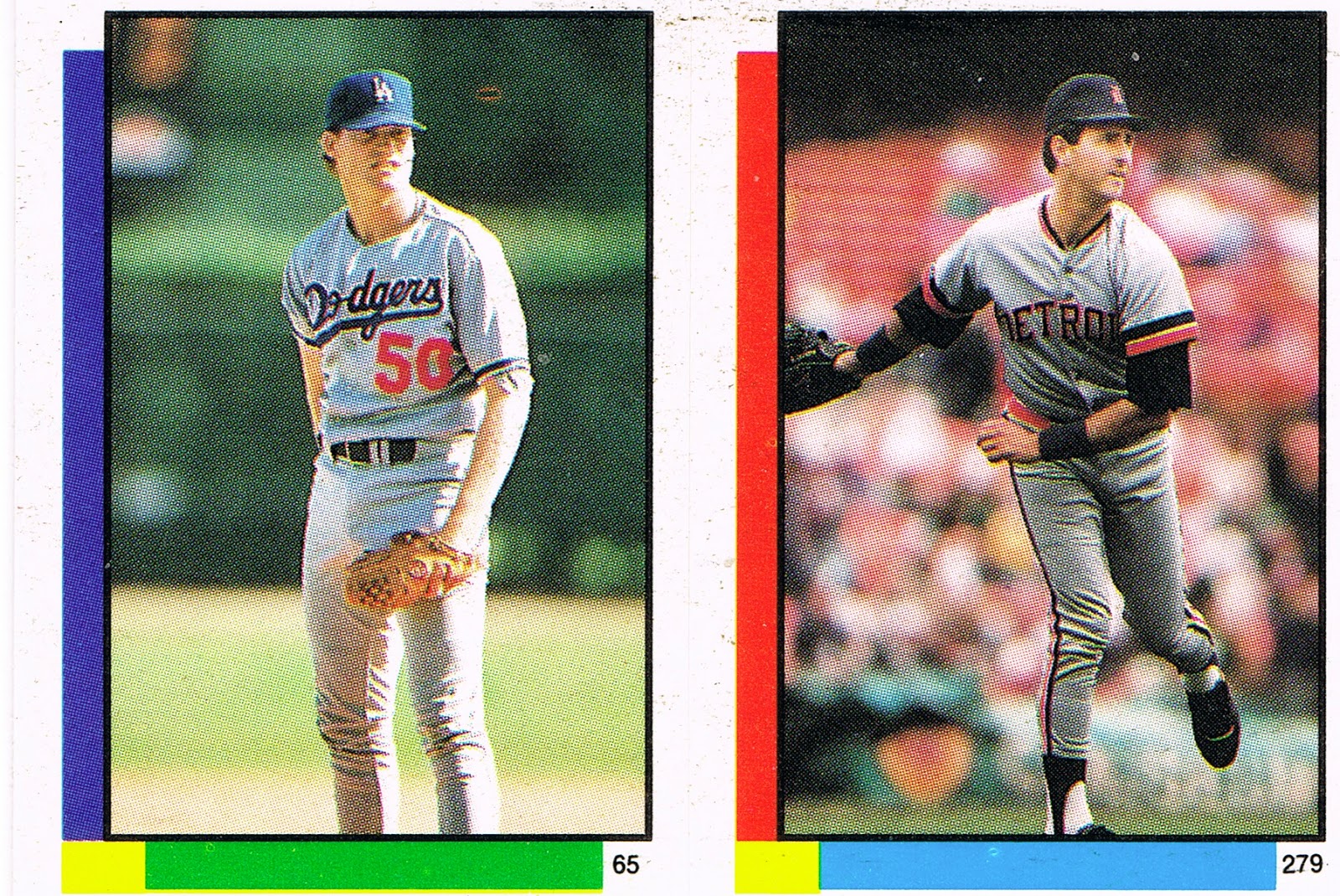 Yes, Jay Howell, you are correct to have some obvious disbelief here: Fred Lynn is not a Pitcher! I hope the runner was out at Home, at least. One of the more unique fielding shots I have ever discovered.

One of the best things about this little baseball memory acquisition at the LCS the other day is revealed on the wrapper: 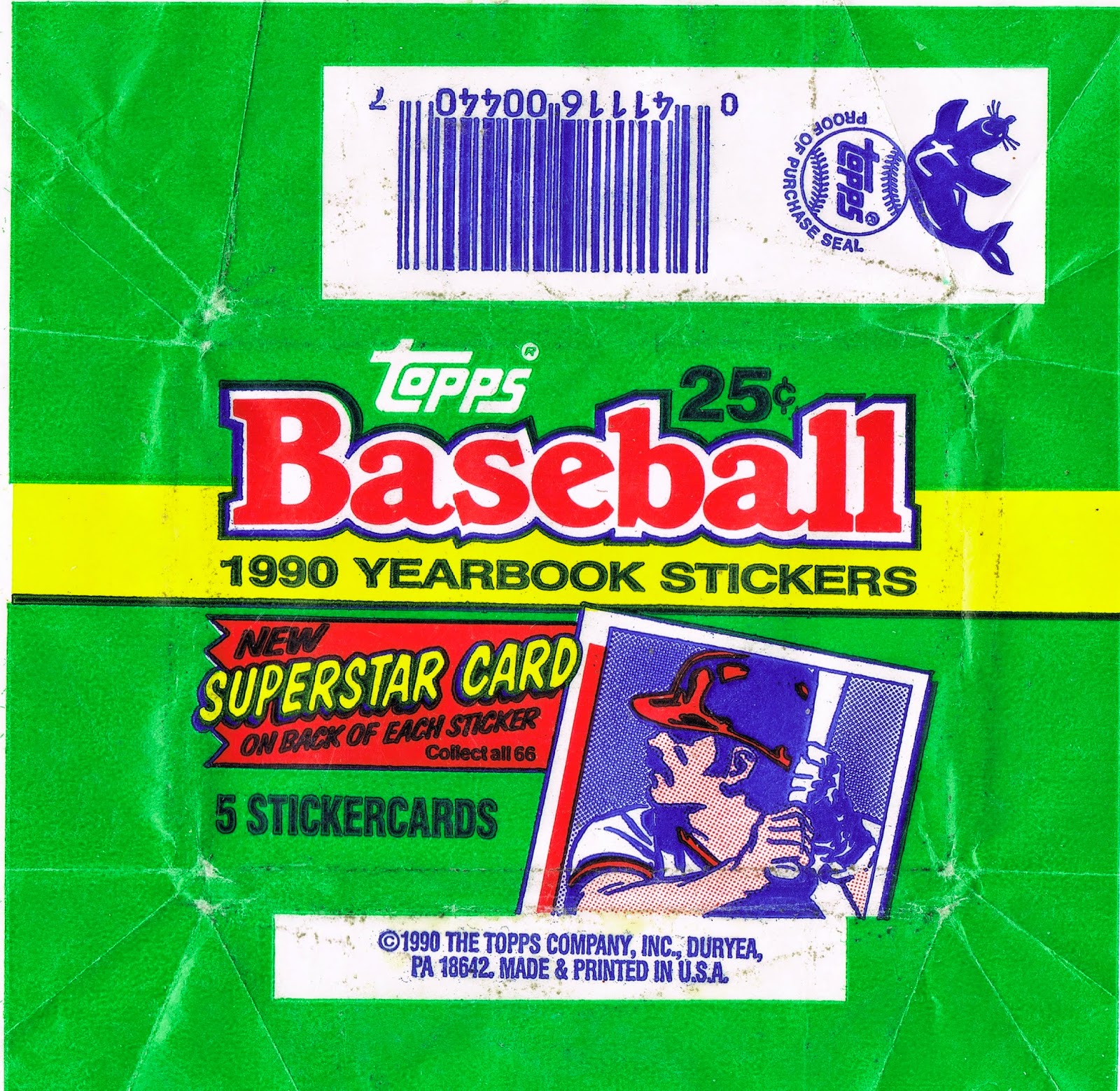 What that might be? This was one heckuva deal for only a quarter, still today. Having an appreciation for the Junk Wax era (with real wax, still), can make for some cheap entertainment these days; I spent a whole buck on four packs. I picked up some other cool cheap stuff along with these that I will be sharing with you some other night.

This wrapper also delights me, because, Yeah I Save the Wrappers too. And this is one of the best wrappers I have ever found from the world of Topps Chewing Gum. I poked around the web and even tried the usual best possible reference for questions about all the miscellany on Topps packaging, the excellent Topps Archives blog. I didn't find anything about what feels like the first time I have ever seen this: 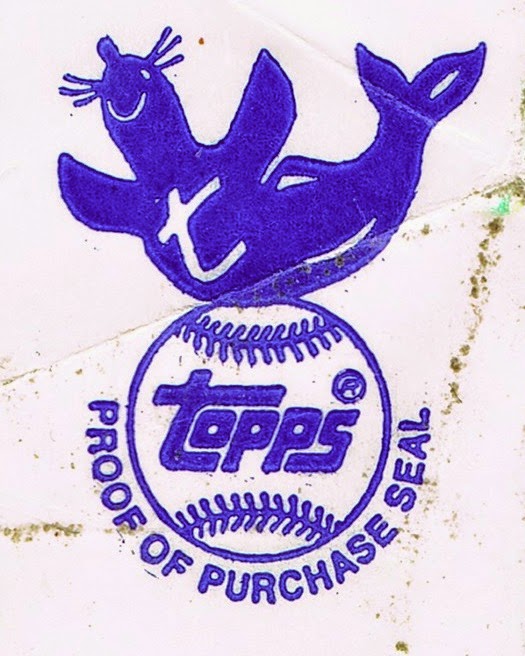 Ever the punsters at Topps. Perhaps these things really are designed for children.
Posted by BaseSetCalling at 11:42 PM
Email ThisBlogThis!Share to TwitterShare to FacebookShare to Pinterest
Labels: Batting Cage, Dugout Card, Leg Kick, Smiling, Topps Stickers, Yeah I Read The Backs, yeah I save the wrappers