Quite often, I like a set of cards quite a bit - but I have a lack of time/space/money/desire to actually complete it. 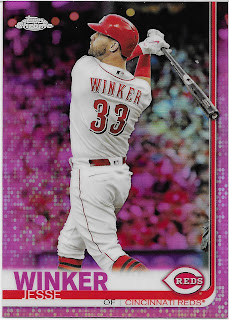 The Topps Chrome retail Pink parallels are one of my more perfect examples of this.

I am not the biggest fan of Topps Chrome. But I like pink baseball cards. I think it is some primal / subliminal urge that connects baseball cards to the color pink, because, Yeah, I Chewed the Gum.

So most years, I like to buy a few retail hanger packs of Chrome; the ones with a 4 card pack of Pinks.

I was reminded of this today when I figgered to pick up a single pack of 2020 Series One to read for awhile this evening to get re-acquainted with 14 Major League baseball players and where their careers are sitting now just as the Pitchers & Catchers are all busy answering questions about the Houston Asterisks.

Alas, was not to be - buying a pack that is. Last Friday, the local retail baseball card god, err, distributor rep, 'serviced' my local Big Box store and set out a full display 2020 Topps S1 via one of those cardboard tray box thingies, completely full of blasters and hanger boxes and with heaping helpin's of extras of those piled on top. Just above it was a full peg of perhaps 2 dozen blister packs holding one pack and 2 purple parallels.

Today, all gone. Rookie Card mania seems to be ramping up again - I have never seen anything like this in my humble little burg of some 8,000 souls. But the something-for-nothing urge hardwired into human brains is probably as strong as ever when it comes to baseball cards.

I was actually fairly content with the discovery; I suspect it will make my local distributor rep tighten up on some things, and be more willing to bring my town more product. And it's not like anyone is ever going to run out of 2020 Series One baseball cards to the point that I can't even buy any more.

But that is precisely what happened to me in 2017, when I wanted to check out some Chrome and pick up some of those tasty looking Pink baseball cards. Aaron Judge mania had hit and Topps was unprepared.

Will baseball cards get scarce this year? I doubt it. Whoever dropped some $400+ on retail baseball cards in my town in the last 6 days is highly unlikely to recoup their investment, and most people who try such a thing via off-the-shelf purchases don't stay with that kind of gambling problem for long. Sure, perhaps individual, true collectors like me slowly wiped out the supply, but I somewhat doubt that. Normally, I can count how many packages of whatever set and pack format have moved since the last time I was at the store, without even really trying.

Last year, my local rep didn't even bother bringing Topps Chrome to my store, or if they did, the local retail ripper investor cleaned it all out as with this first stocking of 2020 S1, and the rep never bothered to re-stock. But in all the other little towns around me where I like to vary my grocery shopping in case the rep decided to drop off some more discounted fat packs of 2009 O-Pee-Chee, well, there is almost the same amount of Topps Chrome on the shelves there as there probably was last August.

So some 6 months from now, I think I will be OK on my own urge to buy a $10 lottery ticket, hoping to scratch off something like this: 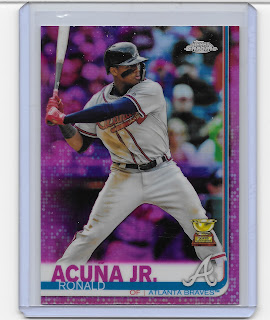 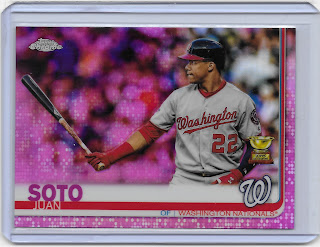 So I did OK. Although I did not hit any of the key "Big 4" RCs tacked on to the end of the Chrome checklist this year, because Rookies. I actually think all 4 of those Rookies are headed towards being merely Very Good baseball players, gasp! The whole "he's too old to reach the Hall of Fame" calculus surrounding Rookies really turns me off more and more each passing year. I just like the baseball cards that I like, but I can in no way afford to ignore what other people might like about the cards I end up with.

And thus those are already in toploaders because they will be sold, possibly sooner rather than later as the whisper campaign (shortage of MLB top 10 hitting stats = sucks) has already started up around Ronald Acuña. Although those are some extra tasty 'pulls' from 19 TC, I will be perfectly content with my plain-ole regular Topps Baseball cards of those.

I also like Topps Chrome because it does seem to offer a decent chance at an on-card autograph on a player's Major League Rookie Card, not their Bowman photo-shopped card. In 2018, I pulled an Andrew Stevenson autograph, ho-hum, but I also pulled a Pink copy of an Acuña RC that shows him post-swing with 'bat down' but of course is not the "Bat Down" RC from S2 now worth a couple thousand dollars already. (I think my humble Pink RC could already net me fifty bucks though).

As with so many MLB Rookies Andrew Stevenson seems, so far, a bit unlikely to truly become an MLB All-Star. But then Christian Yelich hit for a league average OPS his first 3 years in Miami, so you just never know on these things. I have little reason to sell Stevenson's auto for a couple three bucks right now.

This year, I managed to pull another RC auto: 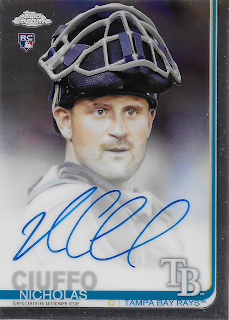 I did get what I wanted from what turned out to be 6 of these lottery tickets in several ways, including having the autograph of a young baseball player who has managed 43 At Bats in his first two MLB campaigns and is as "on the bubble" as any of thousands of other extremely good baseball players are as they gather in Florida and Arizona the next several days. (Ciuffo is a 'non-roster invite' with the Rangers now).

But at the end of the collecting effort, which this post kinda officially represents as I will no longer have a chance to encounter a hanger pack of 2019 Topps Chrome in the store now that 2020 cards are arriving, what I will enjoy the most from the 24 Pinks I was able to consider, in-hand, is this nice simple binder page of pleasingly pink baseball cards: 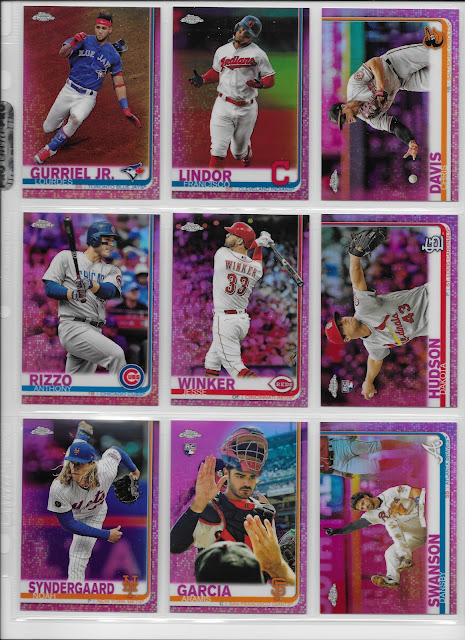