Seems a little too sadly fitting that Major League Baseball re-scheduled the annual celebration of Jackie Robinson Day to this week in particular.

Earlier this year I had been looking forward to posting a small collecting effort I completed recently, on the just exactly perfect day to do so. Though of course 2020 had other plans for us.

And seems to continue to do so. Tonight's League-wide wearing of the #42 seems like a bit of anti-climax, really, after the events of this week. I think the players made a far more powerful statement on Wednesday and Thursday nights than they will be able to tonight.

Living in a small town and then working in even tinier locales, many things in the news in our country frequently seem like news from some other country. There seems to be little about the issues raised this week and throughout 2020 that I can do much about.

Except to vote in elections.

But tonight I thought I would at least participate in my tiny way with Baseball's annual tribute to Jackie, by sharing some cards: 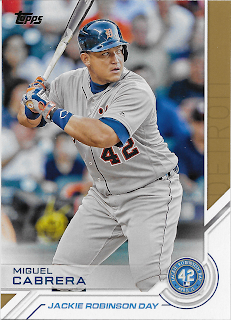 This was possibly the first of these cards to catch my eye, in the 2017 Topps Baseball set, as I collect all the Miggy cards I come across. As I casually collected '17 (Series 2, I think) these inserts started going in to a separate small pile.

I know I was thinking I would complete the small checklist, which runs to 30 cards. But like most such efforts I was in no great hurry to finish it out, knowing well that all of them would be easily available later thanks to COMC.

It was a simple plan. Until I tried to execute it, and I noticed cards like this one: 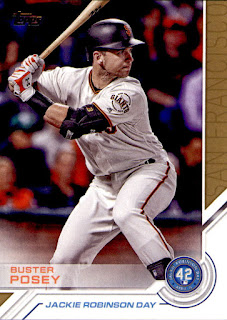 I shouldn't have been surprised by this, really, as the year before Topps had printed a ... subset? ... of cards using images from Jackie Robinson Day, via issuing them as photo variation short prints in 2016 Series 2.

Here is a card from that effort I used to own: 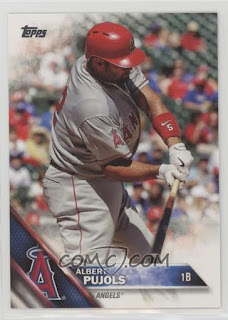 Though I guess it is not really the fault of Topps that Albert's wrist band has his usual uniform # on it, this is another - Where's the 42?

I know it is hard to capture the back of a uniform in a way that makes for a good baseball card. The more recent development of Topps attempting to photo document the nicknames used on Player's Weekend frequently illustrates that challenge as well.

Nonetheless, Topps has otherwise done a fantastic job over the years in honoring Jackie Robinson, which makes these Jackie Robinson Day card Fails a touch surprising.

So for the 2017 JRD insert set, I re-grouped around my steady collecting simplification plan I frequently deploy: I would collect just 9 of the 30 cards. Another Nifty Nine effort.

And since there are 9 players on a baseball team, I thought that would work out swimmingly, and it almost did, in terms of finding one of these cards for each position. The photo Fail on the Posey card was a bit of a loss as no other Catchers made the checklist.

I also overruled using Ryan Braun's card, which has a nice clear image of 42, as a player with ethics like his shouldn't be on this particular checklist to start with. And that would have made for too many Outfielders anyway, and as it turns out, this will have to be a team with 4 corner infielders rather than just 2. Oh well, I tried. Did Topps? 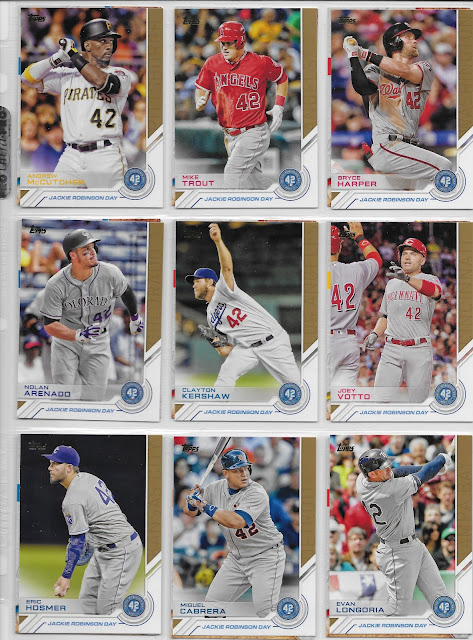 My favorites are probably the Miggy and the Trout, mostly because they share the same every day uniform #, which is the reverse of 42. Perhaps over time, that will become one of the more popular Trout inserts for that reason; at least Topps printed a clear example of Mike participating in Jackie Robinson Day.

For a nice look at Andrew McCutchen's appearances on other Jackie Robinson Day cards, stop on over to today's post @ the Collecting Cutch blog.