They let me buy some Chrome

Continuing on with my cry cry cry theme about 2020 baseball cards and the things that happen anyway, I can report another wish fulfilled: I found 3 "cello" packs of 2020 Topps Chrome, the kind that include 12 cards + 5 pink parallels.

I was working just a few miles away from a tree I needed to check for this fall's seed collecting work, and in between me and that tree were 2 Big Box stores. As I approached the doors to the first one, I just about ran smack into the doors. Still closed, on that side of the building.

Something to do with the virus, I know, but can not understand. How does forcing all of the customers to use less infrastructure somehow make the customers safer? Inside the store features the same pointless reductionist thinking - one set of self serve registers are still closed, so all of the registers now feature longer lines than normal. But of course that probably frees up an employee or two who would normally have to monitor those, so ... thanks Big Box. Not.

On my way back down the parking lot to the other set of doors, I started to think - maybe this will help keep a few people from making the long walk from the open doors, all the way to the opposite corner of the building, where the baseball cards are kept.

I was right. There on the ever shrinking baseball card space, squeezed in between Pokey and Yugi and a couple years worth of Panini football card products, was a little stack of 2020 Topps Chrome cellos, laying flat. Maybe that also threw off the 'flippers', dunno. Maybe they are running out of steam on losing money hauling baseball cards back and forth between the Big Box store and the Post Office, who knows.

I selected 3 packs of packs from the middle and left a few for the 'children'. Sometimes, I like 'shiny'; this card from the first pack comes off very well: 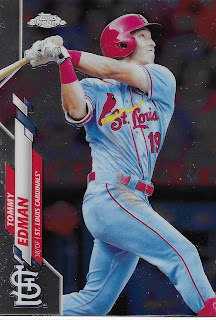 Scans, however, don't always come off as well as every tiny bit of dust that meets the sleeve on the 2 foot transfer from card desk to scanner deck gets picked up oh so efficiently, and Chrome backgrounds can sometimes make every card seem like a night card, particularly when scanned.

But you gotta like the slowly building resurgence of the powder blues; this is probably the Cardinals' "road alternate" uniform now I would guess.

Over the last week+ I have listened to the White Sox take my favorite team apart, night after night, lead by their on-fire lead off man: 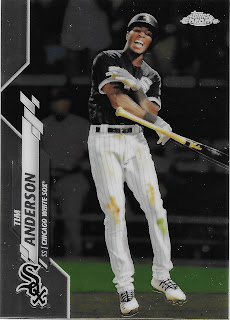 He does seem to be getting some good cards from Topps lately, as does the man following him in the stacked Sox batting order, Yoan Moncada.

Now since I am definitely finished buying Series Two already, a decision made even simpler by the total absence of it on store shelves, I was hoping Chrome could hook me up with some cards I have been waiting to see, like this one: 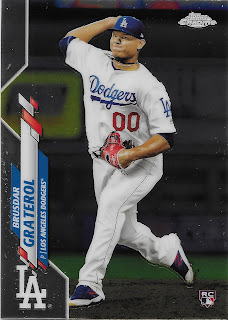 This is one player I am hoping to find a Players Weekend Nickname card for some day. What will it be? Da Bruiser? The Gatorade Man? Time will tell. Who wouldn't want a Brusdar Graterol Rookie Card?

Speaking of Rookie Cards, Topps Chrome is yet another Home of the Rookie Card cards. Sometimes this year, being officially situated in a bottom corner of the card, they aren't as noticeable as a 'top corner' year. Other times, they can catch your eyes in odd ways: 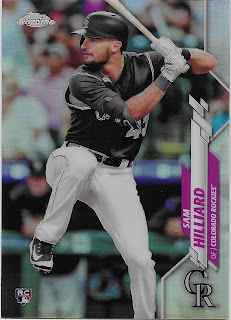 Now that's quite a 'load up' getting ready to just stomp that poor little RC logo there. The odds I see the Colorado Rockies play baseball on a television screen are none to never, so I am glad Topps showed me this intriguing, possibly exaggerated, hitting mechanic, on the extremely off chance bars ever open again I might be able to remember to keep an eye up on the screen for a Hilliard At Bat, should Colorado play in October again, which seems possible this year.

Other times, Topps Rookie Cards can be a bit of a head scratcher, which is what I did when I found this card: 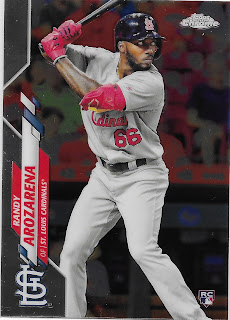 Because a few weeks ago I pulled this card: 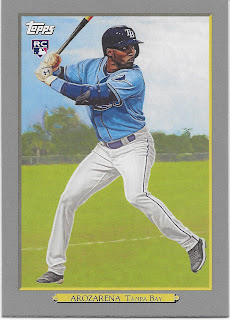 So, what team does this kid play for? Let's go to the tape: 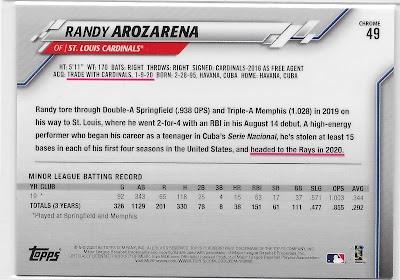 Always impressive when a team trades with itself, Topps. I was mentioning putting some cards in a binder page 'backwards' yesterday; I think I will start up a page like that for these types of cards, which are rare but not unknown in the Topps universe. 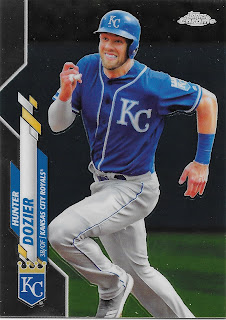 Oh, wait. I think that is going to happen for several years to come, even and especially when there are no more Alex Gordon cards, which will probably be the case from this point forward. I like how on the back of this Hunter Dozier card, his Complete Minor League Batting Record has him playing at NW Arkansas before moving on to Northwest Arkansas for a couple seasons, then a bit later skipping back to NW Arkansas.

Now I do like just regular ole base cards just fine, but I don't think I have ever pulled a Chrome 'Tatooine' card; I like how 'Tatooine' is carefully spell checked by our computer helpers these days: 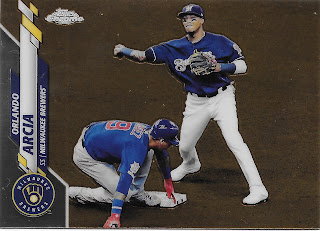 Though everyone else wants to see more exciting base cards, of famous peeps - 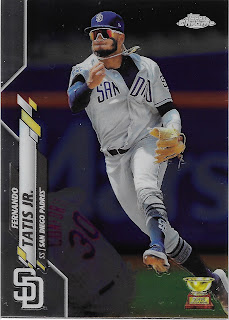 I have always liked Topps Rookie Cup cards; have been thinking about doing a set of them in Chrome some year. Or maybe Pink Chrome, we'll see.

Meanwhile, it wouldn't be Topps Chrome without a slew of trippy parallels of every kind of every card, like this one - 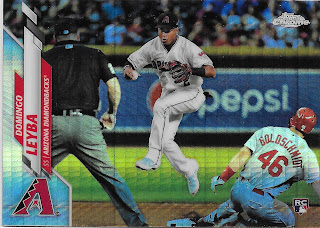 (dig the Goldschmidt cameo on a D'backs card)

These are fun cards, the "prism refractors," which are still somewhat new in the product. I have been quite looking forward to see how they scan, and that is as impressive as they are in hand. I would like to collect these, but see two problems with the idea - they are obviously mostly enjoyable 'in hand' to see the prism tech do it's thing, so I don't think they would be as nice in convenient binder page storage. Also, despite my whining about the difficulty in finding Chrome to buy, print runs these days are so high that base parallels are actually fairly tough pulls. Of the 36 regular cards I purchased in a $40 purchase, I pulled only one "prism" and one "refractor" card. You don't even want to know the price of a hobby box lottery ticket of this stuff any more. So I somewhat doubt I will be collecting these prisms, unless perhaps I find a bunch of them listed real real cheap on COMC next year. Maybe.

Despite the low rates of parallel insertions, I once again managed to pull a "hit" from my baseball card chump change purchase. An on-card autograph of an actual baseball player, and for a change not a future back-up Catcher who can't even make an Update checklist. My 2020 card shopping Mojo persists: 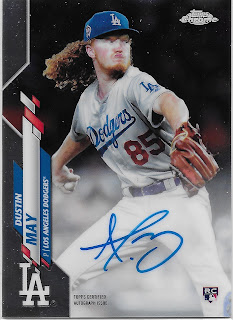 Definitely a decision point card in that I could sell it right now and make my meager little Topps Chrome purchase essentially break-even = free. Or I could put it in my "Rookie" box with all the crucial Brandon Nimmo Rookie Card cards I pulled, and wait. I think I will wait.

That covers most of the basic cards I pulled; Topps Chrome always has inserts of course, and one is becoming a regular feature now: 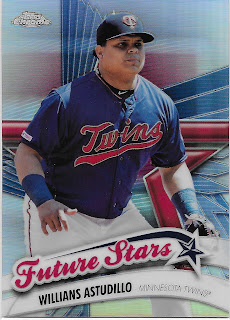 I like Willians Astudillo, and hope to assemble a random 9 fun cards of his to keep. Those hopes are looking dim now as he tested positive for the virus upon intake to 'Summer Camp' back in July and though he has recovered and has now been cleared to participate in Major League Baseball, the fairly hot Twins team has declined to use his fan favorite services so far.

It was nice of Topps to hand him this optimistic insert checklist spot, but the very next card in the little Chrome pack made that a little extra questionable: 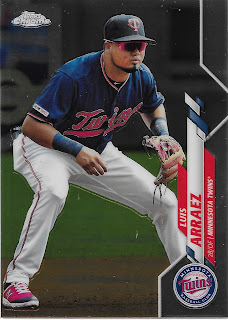 I know it is hard to keep up with baseball in the flyover states, Topps.

Chrome does seem to be settling in to multiple recurring insert themes the last several years, including this one - 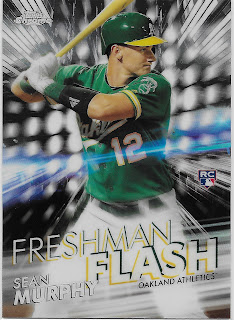 I like these cards though I don't quite see myself assembling them. And I like Sean Murphy cards so far, which is good, because I keep pulling them lately and we will see more of his cards soon enough. 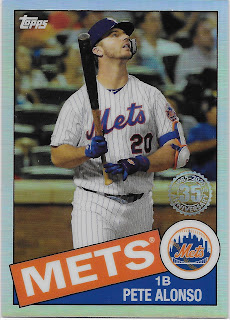 Though when it comes to '85 Topps, I have a love-hate-love relationship with the design. Sometimes I love those primary baseball colors, the dynamic diagonal there, and a large team logo. I then find myself wandering off to eBay to dream about busting a nice 500 card vending box from the set. But then I assemble a little stack of the re-runs and I notice how many of the cards (design+logo+uniform) repeat the team name 3 times (or even 4) and that is just too busy for me and then I get busy doing something else and I forget about the idea until I run across another 'new' copy in a pack and that starts all over again. These seem to fall 1 '85 insert per 3 pack cello pack as I pulled 3 in 3 packs, and all 3 had the team name on there 3 times. Too much.

That leaves only the special pack of one of my favorite kinds of baseball cards - pink ones! 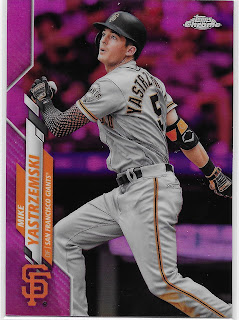 That was another card I have been looking to pull this year, but had been eluding me so far. His grandfather was a favorite player of mine when I opened my first pack of baseball cards, and I particularly like how his 2019 Rookie Cards were considered low grade stuff amidst Vlad Jr. mania. "Too old, just a courtesy cup of coffee based on his last name, going nowhere" sniffed the prospectors. I hope he makes an All-Star team soon. I have a binder page ready to go...

Now the base Topps Baseball design this year doesn't really move me, which is probably why I haven't pulled Yaz jr. jr.'s regular baseball card from Series One already. It comes off particularly poorly when a player is sporting their 'road grey' uniform on a card, and even shiny Chrome can't rescue us from the blahs sometimes - 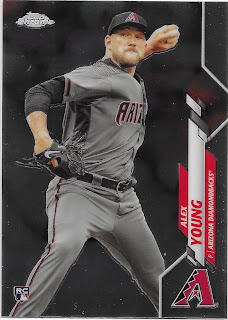 But the pink cards can: 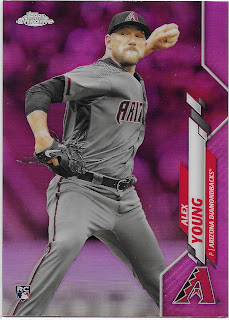 A nice thing about the pink Chrome cards is the way the pink color is applied to the whole card, not just the design frame as on most regular Topps Baseball parallels. So we get to see things like pink Umpires: 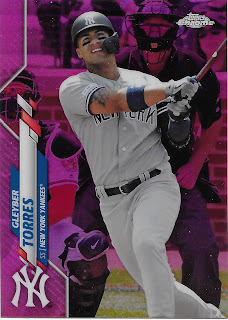 Now if I could just get a pink chrome card of the Oakland A's mascot... Opening Day Chrome? Why not? Given the proliferation of Chrome sets lately - Topps Chrome Sapphire, Topps Chrome Black, Allen & Ginter Chrome, Stadium Club Chrome - again why not? It's not like there is no room on the baseball card shelves for them.

Last year I had some good luck pulling a couple Topps Rookie Cup cards in the pink parallel edition, and it made me think of perhaps collecting those cards that way. I did manage to pull one in my first 15 tries this year: 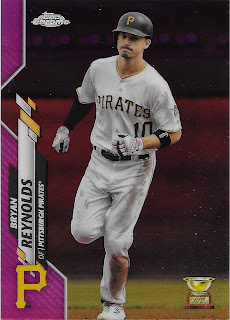 So normally that might lead me to pick up a few discounted cellos of these, which was possible where I live all the way until Spring Training 2020 was rolling. But I suspect discounted baseball cards are now (or at least will be for a while), a thing of the past. I mean when a Mike Trout Superfractor sells for 3.5 Million Dollars and there is a standing $500,000 bounty on a brand new Zion Williamson basketball card, I think sports cards will continue to fly off the shelves, when they are actually even placed on a shelf for me to start with.

Which might be a good thing for me, as long as I can still just slip together a nice nifty binder cage of the cards I do like once in a while. 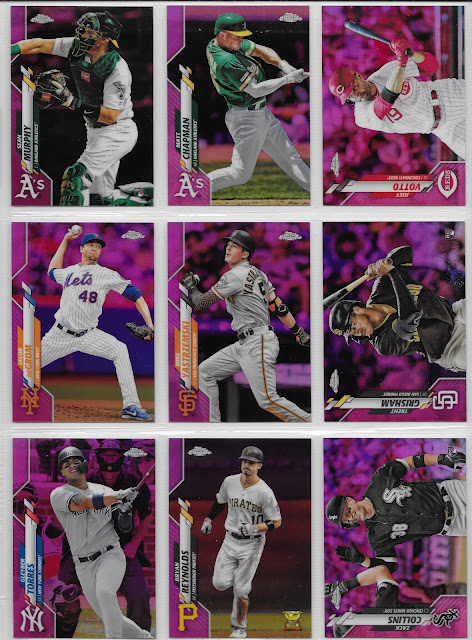