Absorbing baseball cards was a very slow process for me in 2020 and on into 2021. But one card made my brain double clutch, instantly: 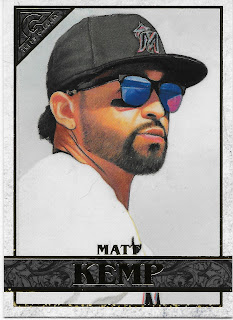 Though I was unable to follow Major League Baseball all that closely last year, even I knew that Matt Kemp had suited up in Colorado last year - not Miami.
I liked a few things about this card; it is probably one of my favorites I have pulled from artist Carlos Cabaleiro. But I didn't much care for the 2020 Gallery design after really enjoying the set in 2019 - when the card text was much more understated, letting the illustration do almost ALL of the talking. See how out of place just a few ALL CAPS letters can be? I bought 2 hanger packs of '20 Gallery and considered buying a blaster a few times to get a deeper exam of the inserts, but after a while even the display box of Gallery disappeared completely, too, before I ever got around to trying more of it.
This KEMP card stuck with me though; a Topps baseball card showing a player on a team he never played for, ever. I know, I know, there are probably scores of thousands of Bowman cards that do this with players who often never even reach the Majors at all. But before 2020, I can't recall this ever happening very often on Topps products. Though I feel confident it has, I can't point to any particular specific example for you.
And the way this card happened was partially organic to the baseball card creation process, partially not. Obviously the unique structure of the 2020 season was a dominant factor in how this happened: Matt Kemp signed with the Marlins all the way back in December, 2019. But was then released in June 2020, before signing with the Rockies in early July, 2020.
Players changing teams and appearing on a baseball card on their previous team afterwards is a common occurrence of course. But Gallery is released in early December each year - six months after Kemp signed in Colorado. I think this also illustrates the long lead times for the creation of Gallery cards.
I have to wonder who else might be a bit of an 'imaginary' card in last year's Gallery. But the Kemp card was the only such card from my meager 2 hanger purchase.
As I was trying to spruce up the appearance of my poor neglected baseball card desk recently, I found another brand new baseball card of a player on a team he never played for. My team: 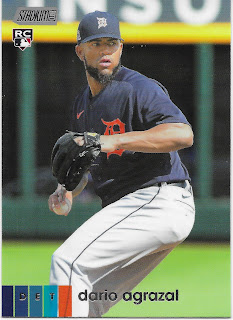 Whatever agent sold Agrazal with Detroit's scouts sure seemed to also sell the idea of him to Topps, who then issued more Rookie Card cards of him than I can even count, including a whole 'nother unique card of him in Stadium Club Chrome, and Topps Chrome, and Heritage, and Gypsy Queen, and Update, and at least one of those on-demand print-to-order dealios that I just ain't got time to even think about, and Gallery, too. And some of those products included autograph cards with a different image than the base card. And maybe a few inserts in there too, somehow.
All for a pitcher who appeared in 15 games to generate a 4.91 ERA for the Pirates in 2019 and then became a waiver claim for Detroit late in that calendar year. You know your baseball team is bad when it is picking up players released by the Pirates - current Tigers experiments include players released by the Marlins and Orioles, so the tragicomedy continues. Last summer, Agrazal developed an arm injury just before the season began (seems to be a common fate for Tigers reclamation projects) and did not inspire the confidence of a new contract with any MLB club since.
Meanwhile I could also only discover 2 hanger packs of Stadium Club last year though I very much wanted more - & this pointless baseball card was one of them. With base cards already at 50¢ each in retail stores, it is a product I have less desire than any other to pay additional mark-up on. And I didn't quite want to pony up for a set of it completed by someone else, though that remains tempting. I often wish I could buy random partial set left-overs of certain releases, but no one sells baseball cards _that_ way.
I have a bunch more of these types of cards to post here, but I doubt any of the players will be able to top Agrazal's count of baseball cards showing him on a team for whom he never appeared in a game. It is truly an amazing run that can all be seen (and purchased quite cheaply) on COMC if you wish.
Another such card, also for the Tigers, actually piqued my interest on this concept far more than the Agrazal card. It is a card in Update, for a player who never set foot into an MLB game for Detroit. Ironically? Stupidly? Lazily?  -- I can't recall the player's name. But knowing that card existed led me to buy a bit too much 2020 Update, stubbornly trying to acquire the card the dumbest way possible - by ripping packs.
I knew there were multiple other such cards in Update, so I started watching for them: 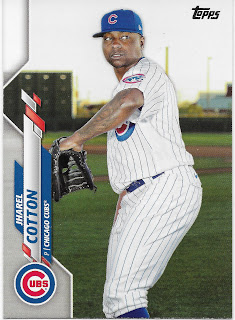 Bold move, Topps. Issuing a card of a player who hadn't pitched in the Majors for 2 complete seasons. Also a bit bold was using a classic Spring Training "back fields" type portrait card with that batter's eye mausoleum looking thing back there. It took the longest time of staring at baseball cards like this one for me to figure out what that thing shown on so many Topps baseball cards actually is; probably because I only ever listen to Spring Training games on the radio and never watch them on TV. I often wish the Topps Baseball set would use a few more Spring Training photos for diversity, and 2020 Update certainly came through for me on that one. Be careful what you wish for, on baseball cards.
Cotton ended up being released by the Cubs during the 2020 "season," such as it was, without ever pitching for them. My only real memory of him is on a Rookie Card in an Oakland A's uniform, for whom he did appear in 29 games. Over the recent off-season he was given a minor league deal with the Rangers.
Though I still haven't even seen the imaginary Tigers card I have been looking for, figuring out the Cotton card did lure me into hunting up more such cards, like this ex-brief-Tiger's card: 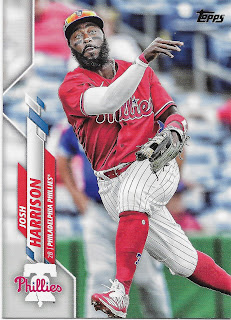 This is also technically a Spring Training card, though without any real confirmation of that in the image. It is also a pretty good baseball card, with vivid colors and a great image flow accenting the card design, or vice versa. The Topps Eye has always liked Josh Harrison, it seems to me. However he ended up playing the 2020 season for the Washington Nationals, who he is with once again in 2021.
Topps has also always seemed to like this next player - 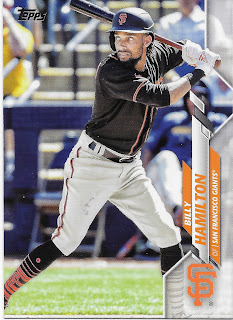 Sometimes the bright spring sunshine reveals a baseball card sourced from Florida or Arizona, as here. However Hamilton would end up a 2020 MLB diamond for 2 other teams - the Cubs & Mets - not the Giants. I think most baseball fans jus wish Hamilton could get on base enough to keep the data analysts happy, so we could all get a break from the Home Run Derby all game, every game. And so, it seems, do baseball's General Managers, who have now connected Hamilton to a fair bit more rosters than Topps has. 2021 finds him back in action after a late spring, post Eloy Jimenez injury signing with the White Sox - so look for him in '21 Update again, or maybe even Series 2 this year.
Players with unpronounceable names - 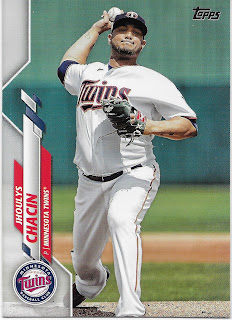 - are the ones most likely to get you to turn over their baseball card.
There are a lot of team names on the back of a Jhoulys Chacin baseball card by now, but the Minnesota Twins are not one of them. For 2021 he is back with the Colorado Rockies after stops in 6 other MLB cities.
I often think it is only because of Update sets that I ever manage to notice how Catchers move around the Leagues almost as much as back-of-rotation starters and middle relievers do. But I think all Yankees Catchers must receive a Topps Baseball card: 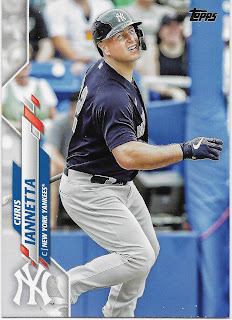 Even when they never appear in the pinstripes, I guess. The Yankees released him early in the summer-only season last year, and he officially retired a week later.
Checking out the career arcs of these players is revealing in the way careers are shorter now, in the data mining age of baseball. 6th-7th year players can now be lauded for their "veteran presence in the clubhouse" for all those Rookie Card cards we find in our packs of baseball cards these days. The next card somehow reminded me of that shopworn baseball concept: 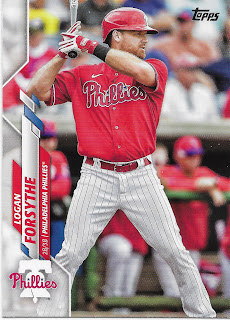 Even when Forsythe appeared in the AL Central for a year, my only knowledge of him was "I have one of his baseball cards." And since I connect that to a Padres card, that probably explains my total ignorance of his career. San Diego is a long ways away from me. Forsythe ended up in the opposite corner of the country in 2020, appearing in a few games for Miami - not Philadelphia. It seems unlikely he will be seen again on cardboard.
So while I continue to hunt for the mystery Tigers baseball card of a non-Tiger, I also have a future problem to solve with these cards. If I find that 2nd Tigers card for this kinda surreal little card collection, I would then have 9 such cards and closure, on this concept, with one complete binder page.
But I expect more of them are out there, waiting for me. Have you found any of these?

Posted by BaseSetCalling at 1:49 AM
Email ThisBlogThis!Share to TwitterShare to FacebookShare to Pinterest