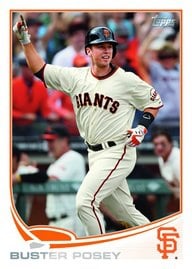 Of course, it needs the Opening Day bunting on it. Do I really NEED it? No, not really. I probably have 3 or 4 copies of it from Series One already, thanks to my parallel problem. But it is the last card I need from the Opening Day set.

And I doubt I have ever worked on completing a set with card #1 being the final piece of the puzzle. But of course, statistically, it has to happen to someone, somewhere, sometime.

And Happy Opening Day everyone! I had a great day, baseball card wise. How could I leave behind a poor, neglected blaster of 2012 Archive on the shelf on Opening Day? Those wrappers suck me in every time. There are just a few things in that set I want, but it is always nice to build up a little more on the farm system to trade away for the pieces you need up there in The Show, i.e., your own personal binders.

I had random other fun with baseball cards today, and was able to listen to most% of the Tigers broadcast, but I am just too tired to write much tonight. In the month of March I was out on job sites 27 days, spent 2 other days driving most of the day (over 4000 miles on the month), and slept for 2 days, with a little blogging thrown in on those 2 off days. April looks to be probably more intense, and I will have an employee or two with me a lot, so blogging will probably decrease some. I do hope to look into that mobile blogger app, we'll see....

....and I dreamed up a horrible, horribly difficult Franken-Frankenset idea that I will need lots and lots of help from the blogosphere from. Let's just say that it will require mass quantities of common player pink, camo, and black parallels. So when you see a random lot of them available, think of me. I'll dive it into strong about May or so.

I have never built an Opening Day set; I could never figure out a good reason to do it. This year I found one in my very first pack: 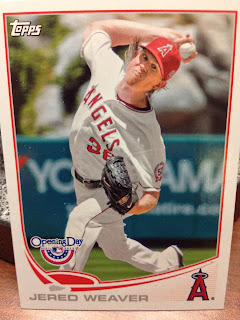 Sure, there are the now standard short print image variations. In Opening Day, they are all Press Conference cards. BORING. I'd rather have an Umpire Card, and in fact I found two good ones so far in Opening Day, a topic for another night.

What is the big deal on the Angels #1 starter, aside from the hinting on his card that he is thinking Yo Mama can't throw a fastball like this one? Here is his card from Series One:

So for whatever reason, not every card in Opening Day will be the same as their regular Topps issue for the year. And I don't mean the half-dozen or so variations of players part of late trades and free-agent signings who then have all new images in Opening Day, as compared to their already released Series One cards. And yes, I know, those are all Photoshopped. The horror.

How many such "new" cards are there? Right now it is impossible to say, because Series Two won't be out for another 2 months. So anything can happen with that I would think.

But since I really like the sea turtle set this year, I do want all of the cards with that basic design. Well, except for the Press Conference short-prints, and the wrestling "Divas". (Google Image that on your own time, I don't have anywhere close to enough of my own). And there are a couple of the insert subsets I want to finish out (again some other night here).

So I dove in. At least Opening Day is cheap. I did discover one other for sure variation from Series One, possibly: 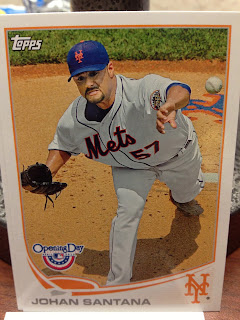 This card is in Series One, sort-of. The back isn't. In Series One, this image is on a checklist card. In Opening Day, Johan gets a normal card back with all his stats. This would somewhat imply that he would have another card in Series Two, one would hope with a new picture.

Until, of course, the sad recent announcement that his season is over, and quite likely his whole career. Seems like a case of Topps Voodoo to me perhaps. And this could then possibly be his Sunset Card. We won't know until early June; I hope Topps uses the slot in Series Two to instead create a new card. I don't hate Santana or the Mets, I just like to see the Base Set be as efficient as possible.

A similar situation arose this spring with another excellent starting pitcher, who did not have any card in Series One: 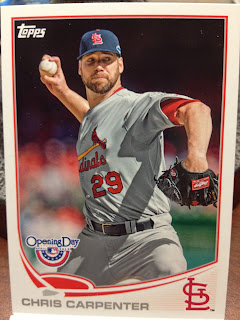 I kind of just realized this is a dumb post to put up on Opening Day, one of the happiest days in baseball. Just looking at the expressions on Carpenter and Santana on those two cards definitely has me thinking beware the Topps Voodoo.

So despite overdrawing my time bank once again - you have no idea how long these posts take when internet service with "free wi-fi" has been beyond terrible for the last week or so, but then it frequently is as you get what you pay for - I will leave you with a more fun find from Opening Day, one of my favorite mascot cards this year. Sorry Mariners fans, but everyone knows Elephant trumps Moose: 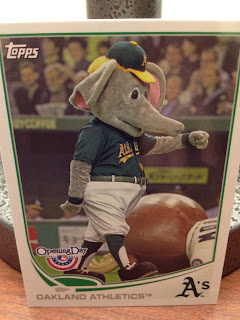