I thought the stats went on the back of the card

I have loved this card since I first saw it. It's not quite an official In Action card, though the photo does an outstanding job of conveying action. The card would also get a very, very good grade in Photo Composition 101. And I've always liked Dugout Cards. Jacoby is headed out there to get a triple play this inning, you will be Put Out soon enough.

And this is what I think of when I see the two words 'patch card' together - a card that shows the unique patches on the uniforms, particularly the ones that only exist for a season such as that 100th anniversary of Fenway Park patch. I hope to pick up the Dustin Pedroia 'real' patch card some day for my own small copy of that patch.

And such a nice sunny optimistic day at Fenway. No hint of troubled chicken wings in the clubhouse on this card. Or is there? Dark clouds are brewing.....up there in the corner of the card.

Topps cards have always done an interesting job of explaining the game of baseball. Why did the Red Sox trade Josh Beckett last summer? Sure, salary concerns don't factor into baseball cards. They're still for kids, and kids don't need to know about salaries. 'course, everybody tells me baseball cards are overwhelmingly purchased by us grown-ups these days, so you would think contract status and salary figures that are part and parcel of all sports talk now-a-days would somehow leak onto baseball cards one of these days.

Surprise, surprise, I digress again. Why did the Red Sox trade Josh Beckett last summer? Let's ask Topps. Sure, we could go to either of his 2013 Topps cards to see just what happened last year, with his Series One card having more statistical detail than Heritage of course. And he does look a little non-plussed about life on the front of his card this year: 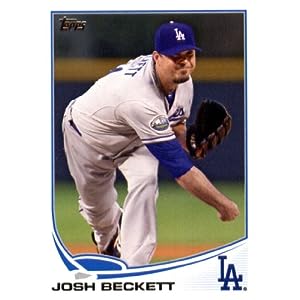 I will spare you the horror of his Heritage card. Maybe it is some twisted part of the explanation of the change of leagues and coasts for veteran Josh. But the horror, the horror. Google Image that one on your own time there if you haven't seen it. Nice stadium Patch Card up there on that Series One card too....finally linking us back to Jacoby's card here. Digression? What digression.

Topps puts it all out there for the world to see:

c'Ya Josh. Fenway has had enough.

How'd that work out for everyone? You can follow the results here, on baseball-reference - Beckett Stats. Probably I'll need his 2014 card (and several others) to really figure it all out, presuming Josh is signed to L.A. for next year. Sure would be nice if my handy baseball card would tell me that. Yeah, yeah, there's a website for that. I just linked to it. But I like flipping over cardboard instead.

So, another case of Topps Voodo? Only time and innings will tell of course.