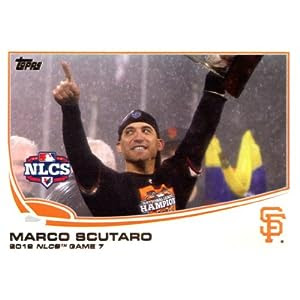 That's a reference to the wonderful TV show Wonder Showzen from about ten years ago now. Kids Show, Kids Show, change the channel it's a Kids Show. If you are a grown-up playing with baseball cards, you should probably enjoy the subliminally subversive content of Wonder Showzen. Things like a little kid interviewing a Wall Street stock trader asking him how well the raping and pillaging went that day. Hard to believe it was ever 'broadcast'. I'm usually allergic to television, but that was some prime stuff.

You don't play with your baseball cards? Too bad for you. They are for kids, you know. Gotta get those kids hooked on gambling as soon as possible, so they can step up and buy lottery tickets and support all us old farts.

But I digress. All too easily when stuck in a fast-food joint watching the day's work possibilities get washed away. Such a nice job site too, full of pissed-off cattle and lots and lots of ticks and absolutely zero contact with the digital world. Which means I can't even get box scores on my phone, like I'm living in the 20th Century or something. But then this job-site probably has had cattle on it since the 19th century.

I got my first "Rain Card" in 2011. I didn't realize what it was until I "pulled" the above card sometime in February of this year. I just thought Mitchell Boggs must sweat a lot: 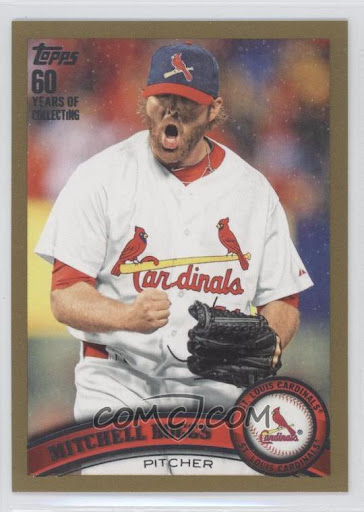 Seriously. I mean, they don't play baseball in the rain. Unless, of course, lots of TV rating$ are at stake (*cough* *cough* Playoffs *cough* *cough*). Gotta pay those ball players thousands of dollars _per pitch_ somehow, starting-rotation-integrity-be-damned.

[Just noticed the nice Alternate Cap he is sporting there. I think those are busted out Sundays only at Busch Stadium, or whatever they call it these days. Could probably be used with the right website to figure out what day Boggs got that Save, but I'm running on fumes this week. Maybe when I work up my Special Cap page / post. Adam Wainwright is getting lonely hanging out with all those Texas Rangers on that binder page.]

So I have been aware of the changes in baseball cards brought on by the digital photography revolution since probably since one of the Stadium Club sets in the 90s. I'll be working on that one sometime this summer, stay tuned.

But I really did think poor Mitchell must have got really intensely worked up there, saving a game in the bottom of the ninth. Until Marco and the ? first ? do-rag baseball card came along this year. Now that would be a terrible Frankenset; I'll leave that to the NFL collectors.

Instead, I'll be out looking for Rain Cards. Sorry Mitchell.
Posted by BaseSetCalling at 2:37 PM
Email ThisBlogThis!Share to TwitterShare to FacebookShare to Pinterest
Labels: 2011 Update, 2013, Alternate Cap, Rain Card