A card of fundamentals

I think most collectors like Bunt Cards. I like them so much I honored them with some capital letters there.

Bunting itself is a more controversial topic. Bill James and then the book Moneyball began the assault on the theology of "small ball'; I think the movie version of Moneyball really brought the topic to more casual fans.

However you may feel about baseball strategy, Bunt Cards will always catch your eye when flipping through a stack of cards. Probably because there are just so darn few of them. I have previously written about one of my favorite cards in Series 1, #284 Angel Pagan, which is a bit of a stealth Bunt Card in that Pagan has already left the classic bunt pose. #273 Dexter Fowler is a similar post-Bunt Card.

So it was wonderful to discover a quintessentially classic Bunt Card in Series 2, featuring Angels Shortstop Erick Aybar: 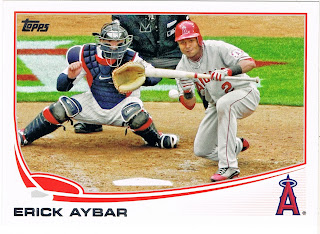 The Topps scribe even conveniently syncs up his prose with the imagery, explaining on the back that "Erick is moving up Angels career lists on some of the more subtle categories. He's their all-time leader in bunt hits (78); ..." You'll have to buy your own card to find out Aybar's other statistical subtleties. They are pretty cheap as this is just another useless Base Card.

Aside from being a fantastic Bunt Card, this card is also an outstanding illustration of photo editing, specifically cropping. Aybar's left foot seems to be resting on the frame, while the catcher even seems to be using the frame for a bit of support. Perhaps that left border could have been zoomed out 1% more for a little bit better masterpiece I guess.

Now when I set this card aside to babble out late some evening, I didn't really think it would tie in so much with the Angel Pagan card I like so much, aside from both of them being Bunt Cards. But when I started typing away about Pagan's card, I quickly wandered off into the theory of Photo Composition, something I am slowly learning via admiring my baseball cards. I think I have even managed to find something to take a picture of to put this knowledge to use; I'll share it with you some other evening whenever I find the time to unpack a bunch of 2011 Series 2 cards I bought real cheap even though I hardly needed very many of them. They were cheap.

Anyhow, in that post (relinked again here) I got a little closer to understanding a mark-of-good-photography called the Rule of Thirds, though concluding it can only infrequently be used with baseball cards. At least, until I showed it to my friend Jeff, who I had borrowed an illustrative train picture from. His comment got me much more discombobulated on the subject.

So tonight I buckled down and asked Google to tell it to me again. This time I went with a simpler link to the Wikipedia entry on the subject, rather than a more high-falutin' Art-Of-Photography type site. This one tells me that "The guideline proposes that an image should be imagined as divided into nine equal parts by two equally-spaced horizontal lines and two equally-spaced vertical lines, and that important compositional elements should be placed along these lines or their intersections."

And this is exactly what the Topps photo editor has done. The subject of the photo, Erick Aybar, is not the center of the photo; he commands the right 1/3 of the image. Since the card has gone and scrolled away again, I'll post it again, since digital stuff is sorta free: 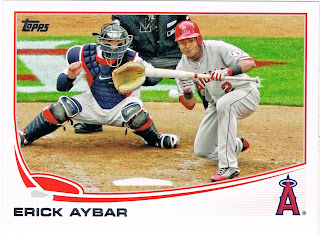 Indeed nothing is centered on this card; the center of it might be in the patch of grass below the catcher's (Joe Mauer?) left elbow, with a constellation of the elements of the photo circled around that point.

And with Aybar, the Umpire (I always like an Ump on a baseball card, even if just a portion of one), and the Catcher all making a nice set of vertical elements, we also have an excellent set of horizontal elements courtesy of the infield grass and the dirt. I think I detect the interlocked TC logo in that grass there. Plus we get an appearance by Home Plate, so very rare on baseball cards, even though returning a batter back to Home Plate is the very object of the game of baseball.

Recently I read a criticism of this year's "Sea Turtle" design as it has been dubbed. To wit, "there is too much wasted white space on the cards." But I think I disagree on that idea thanks to what I have learned studying this card. Perhaps the very layout of the cards themselves is part of what has made this set pretty popular with whatever collectors there are that actually care about these things. Perhaps that "wasted" white space actually helps get the image of the player more onto those tension creating, not-centered or squared parts of the card, and this makes them subliminally more attractive to us.

But then that might only truly work on the great horizontal cards. I would say that I am looking forward to finally assembling all the horizontal cards in Series 2....I had better get my butt in gear on that as Update drops next week sometime.

So yeah, yeah, yeah, enough with the Photography lesson already. What about the baseball game being played on this card here? Looking at the catcher's pinstriped white uniform, all classically accented with red white and blue, and my hunch on the logo painted on the grass there, makes me think this game features the Angels at the Twins. Aybar does seem to be wearing road grays, though of course the Angels® refuse to ever come clean with where exactly their hometown is.

But with the California or Los Angeles or Anaheim Angels being in the AL West and the Minnesota Twins being in the AL Central, that leaves probably only one visit by the Angels to Minneapolis in 2012, but actually Baseball-Reference.com informs me that the Angels visited Minnesota twice for a 2 game series each time. I bet the Angels were thrilled with that scheduling.

A bit worse for my curiosity on the impending bunt action by the Angels all-time Bunt Hits leader, Aybar bunted once on each trip to the Twin Cities, on both April 9 and May 9, 2012. So back to the card I went for more clues. Perhaps long sleeves would indicate playing on a chilly April day; this card is definitely shot in the daylight. But both days are weekdays - and the 2nd game of the set, played as "getaway" day games to facilitate traveling on to the next stop on the schedule. Baseball-Reference has everything though, reporting that April 9th was 45º while May 9th was 65º at game time.

At this point I'm leaning towards the May 9th date as Aybar is sporting the short sleeves here. But I keep staring at this wonderful card for more clues...hardly any shadows on the field, must be cloudy out. Baseball Reference is ready again, reporting that weather conditions were "Cloudy" on each day. I bet the Sabremetricians have a line in their spreadsheets for that too.

Me, I'm just a baseball card geek, not a stats geek. So I stare at this card some more and find the final clue...a uniform #. How does Aybar's # 2 tell me what day this photo is shot? It doesn't. The Umpire's #  there at the top of the frame - 72 - does. MLB Umpire #72 is Alfonso Marquez. No baseball cards for them of course; I had to ask The Google that too.

And that clinched it. Marquez called the game as the Home Plate Umpire on April 9th. Temps in the 40s must not bother the Dominican Rebublic born Erick Aybar. Tough. And now I get to see what happens when that pitch hits Aybar's perfectly squared bat there with one out in the top of the 7th, the Angels up 2-1 and a runner on third...

...it's a Suicide Squeeze! Aybar lays down a perfect bunt fielded by fresh Twins reliever Glenn Perkins, who can do little but throw Aybar out as Chris Iannetta races home and scores!

Perfect!
Posted by BaseSetCalling at 2:09 AM
Email ThisBlogThis!Share to TwitterShare to FacebookShare to Pinterest
Labels: 13 Series 2, Bunt Card, Lines, There's A Baseball On My Baseball Card, Yeah I Read The Backs