Yeah, I Chewed The Gum

I miss the gum in the packs. Of course, my teeth probably don't, but it's not like I'm some health saint that manages to avoid all sweets. A couple months back now I actually scored a pack of baseball cards with gum in it, and I wasn't wandering back to the early days of junk wax when I did it: 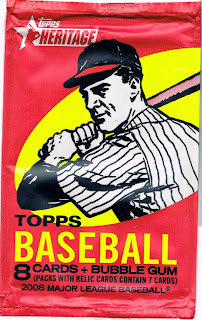 It came in a re-pack pack of packs, and I was really looking forward to this one. A piece of Bubble Gum from the Topps Chewing Gum Company! And those 1959 style cards inside ... We'll look at those momentarily.

I ran across a post in the blog-o-sphere today that moved this wrapper and it's 8 cards to the top of my blog-about-it pile. One of the best pictures of old baseball card gum ever; perhaps the first picture of 24 year old baseball card gum ever. Don't get too gah-gah over all the awesome vintage cards on the header of the blog (Baseball Card Breakdown) now, scroll down a little to see the gum and the tale that goes with.

I don't think I would try gum that old even though I miss that gum so much. But 5 year old gum, heck yeah. I chewed it on up, and it was all-good, as they say.

I don't understand why we can't have one baseball card product with gum in it still. I know, I know, the "collectors" hate the gum because it messes up the cards, for one. But then the "collectors" who care about such things rarely keep the kinds of cards that get messed up by the gum. Base cards are just filler material for their precious hits.

But really no one wants the gum, even the people who do collect the sets. A great LCS I frequent in the winter used to keep a big jar of all the gum from all the packs on their counter. It was never, ever empty. Anyone who came in could have all the gum they wanted, or they could leave the gum from all the packs they ripped. This was good for me. Err, bad for me. I'm confused. But there was an infinite supply of the stuff, indicating a tiny demand in the brutally supply-and-demand ruled world of baseball cards.

Even so, I wish Topps would put gum in just one of their oh so many products, just for me. For old-timey sake. I know they probably get more sentiment than just mine on the topic. And what are baseball cards if not a sentimental product?

Meanwhile, they hold the patent/copyright/monopoly/trademark something-or-other on the whole concept of packing picture cards of sports stars along with bubble gum....but they don't even use it. Surely there must be some sort of legal precedent on that - if you aren't using your rights to an idea, can you still control those rights?

What I'm saying is, I'd probably buy some of those weird, un-licensed, logo-less baseball cards if they came with gum. Oh yes.

So once I started chewing the gum for the first time in a good five years or so (last time I had picked up some Heritage), I of course started absorbing my 8 new baseball picture cards. I was really looking forward to this pack, because I like '59 Topps a bunch, and have been thinking about chasing this set: 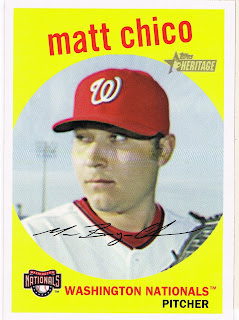 ...and the first card is blurry, though the scanner helps it some compared to card-in-hand. What gives, Topps? Is that an attempt at truly authentic authenticity? Were there blurry cards in the 1959 set? I kinda doubt that.

I passed on scanning the 2nd and 3rd cards. The second featured an over-lit face in a stage photo (mark grudzielanek), though I believe that was occasionally seen on vintage cards. The third card (huston street) looked like an obviously digital zoom-in of a photo taken from quite a bit farther away than it appears on the card. It almost looks straight-up pixelated.

I will say that I do like on-card autographs. Yep, printed right on the baseball card by a machine, the "facsimile" autographs that are pointless to the "auto" collectors today. But I have to wonder how much longer Topps could even produce a set with that feature, with the severe decline in basic penmanship in the world of autos. I frequently think there should be a blog featuring all the ridiculous scrawls that pass for signatures, with a 'best-of' 'worst' signature contest every year. It certainly wouldn't lack for content.

The 4th card made me just simply mad: 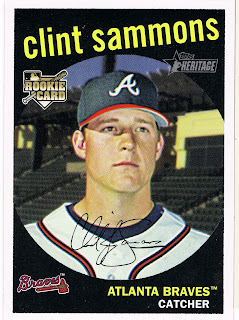 The beauty of the 1959 cards is the spare simplicity. Though they still convey a lot of information...player's name, signature, city, team name, position, and an extra bit of art via using the team logo. Accomplishes a lot but still looks clean. Then Heritage has to add it's logo. A part of the product, OK I suppose. But the ridiculously large Rookie Card logo in use in 2008 has to come along and push the design past the tipping point. What's the tipping point? I dunno, some line in my mind somewhere.

Maybe I wouldn't have gone over that line if the Topps photo editor had been smart enough to not use a photo with such a dark background on one of the black cards, though I really like those in the '59 design. But with all those other colors to choose from ... 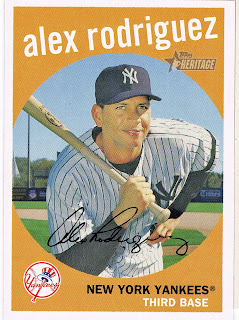 ...then I had this guy staring at me. With a something-eating grin on his face, kinda makes you wonder which ridiculous blonde girlfriend he had that year. If I had one of those girlfriends, I'd probably have a Cheshire Cat smile going on all the time too though.

But what is the deal with that blah-orange background? I traded away my only 1959 card this year to a deserving home (Foul Bunt) that is building a set of them. And I've seen others over the years here and there, just haven't owned them myself. But one thing the 1959 set never says to me is "pastel." The colors always seemed brighter to me, even 30 and then 40+ years later. But the Heritage cards (in this pack at least), just seem kind of washed-out to me. Not quite right somehow , like the tint control got stuck on 'low' at the baseball card factory.

Lately I've had some thoughts on A-Rod, he of the many lawsuits now, and yes, I'm going to head way off on a tangent away from baseball cards. I'm sure you're not too surprised. But this is something I posted on somewhere (I'm not allowed to post a blog link there, so why post a link to there?) on the topic maybe a month ago, just after his suspension was appealed and he started playing in the 2013 season finally:

A-Rod's defense is that he is being blackmailed. He is disputing this, he claims, to protect future players.
I look forward to reading a solidly investigated, quality journalism book on the entire Biogenesis affair one day.
But until then ... what if A-Rod is telling the truth? So this Bosch character had a disgruntled business partner that resulted in the beans being spilled on his sales of PEDs to the other dozen+ players. But what if he _was_ simultaneously blackmailing A-Rod for money? Could there be a better blackmail target in all of baseball? He was the most hated player in the league way before these allegations surfaced. Who is going to believe A-Rod? The League?
Why would A-Rod risk his huge contract by going out and recruiting other players to use PEDs? Makes no sense. I could see him using to combat his aging, sure.
Is MLB just using some documents from Bosch, and the tales of Bosch while trying to avoid other legal action, for this? They have "evidence"? What is it? Just that guy's word and some pieces of paper? Are there any other key revelations I haven't heard?
But I think A-Rod does have a certain point. Absent a failed test, players could be vulnerable to extortion/blackmail type threats. A lot of money is on the line ... might be easier just to pay the criminals.
I think it will be a long drawn out case. Maybe a Court TV type case. Rodriguez can certainly afford a few lawyers.

I dunno. I do hope I don't have to pull so many Alex Rodriguez cards all the time, going forward. Though I'm inclined to go backward in collecting of late, so I think there will still be a lot of A-Rod cards in my future.

Finally, Topps came through with a solid line drive right over the center-fielder's head and bouncing off the wall, the left fielder is coming over but he can't get it either, and the batter is into second with a stand-up double: 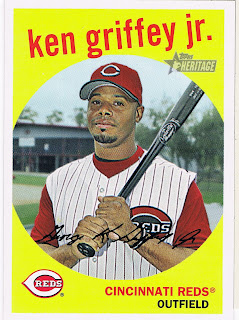 Griffey to the rescue! Thanks Topps!
Posted by BaseSetCalling at 1:22 AM
Email ThisBlogThis!Share to TwitterShare to FacebookShare to Pinterest
Labels: Heritage, Yeah I Chewed The Gum