I pulled a card in Update with a photo element I'm fairly sure I've never seen on a baseball card before, though this surely can't be the first one: 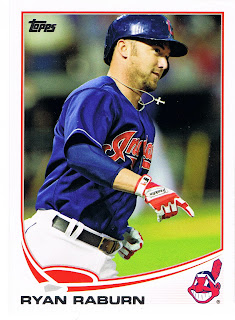 I am seriously impressed. In this day and age, when anything that anyone might have an opinion about is carefully scrubbed from any connection to anything a corporation does. A grounds crew putting a Cross in the dirt on the mound caused some discussion at one point this season. And once there is discussion, you can be sure the Cross was soon removed.

I'm not sure how many baseball players wear a Cross while they are playing, but my count is up to two now. I saw one briefly pop out of Carlos Beltran's uniform the other night while he was at the plate. He was definitely not wearing it for show as I didn't see it again. Perhaps Raburn is about to lift his finger in the air as the more traditional sign of an athlete's respect for God, as Beltran is known to do as well. I'm not sure I can think of a card with that gesture on it either however, though I would imagine those exist also.

And now my count is up to three players, and two cards. A Cross also appears on this card, though it is very hard to pick out: 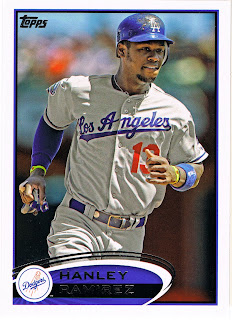 I discovered that one by looking for pictures of ... Carlos Beltran. Which I found, only to see him being held on base by Ramirez in the NLCS, with a cross on definite display. So I checked some of his cards and there it was in last year's Update binder.

[ Looking through that was strange now after spending so much time with the 2013 set. 2012 cards are on average quite a bit darker, it's quite striking to look at pages of them next to this year's cards. It's almost like the ballplayers were playing under a different sun back in 2011. I'll have to look into this and see if the scanner can pick it up for you. ]

Anyhow, getting back to Raburn's card...I'm sure the Ramirez card isn't the first one ever where a Cross can be seen, but the Raburn card has to be one of the more prominent ones ever.

Ryan Raburn really turned his career around this year. Maybe having a fantastic card in Series 1 was finally a good luck charm for him. I can't recall very much that was memorable about any of his other cards. Maybe Topps Voodoo at work in a positive way. But of course Voodoo and Christianity definitely do not mix, sorry Ryan.

Whatever it was, Raburn was a very good 4th outfielder for the Tribe this year after a dismal 2012 in Detroit. He definitely had the physical abilities to play baseball, but he would famously only produce late in the season, which never made any sense when he was with the Tigers. This year, he played with quite a bit more consistency and was able to re-sign with the Indians in the middle of the season.

So I like his new Update card very much. A positive image of a player who didn't quit, and did well when given a second chance in the Major Leagues. We all can root for a player in that situation, perhaps the card prospectors most of all of course, and baseball is frequently about 3rd, 4th, and 5th chances sometimes too.

This card will stick with me for a while. I do also really like the colorful alternate home uniform Raburn is sporting here; more bonus points with all the red-white-&-blue - the colors of baseball triptych - but this card has a critical defect. All the lines of the image flow down. This is never good on a baseball card.

So here, let's look at another card:

Whoa, what set is that from? That sure looks like a pretty sharp baseball card. Minimalistic text, maximalistic logo, understated graphics. Copyright legalese on the front though? What gives?

That's actually a 'Sublimated Plaque' from the MLB shop. So you don't have to keep your favorite ballplayer encased in plastic in a box or a binder all the time.

I will say I think Raburn has a definite favorite batting glove. And though having the player's face in that much shadow earns this baseball picture product a demerit, the lines flow much, much better than his 2013 Update card. Up, up, and away.....you can finish the home run call by channeling your favorite announcer here. That's how a baseball card should work.

Now, you may have noticed I capitalized the word Cross through this piece....I respect the Cross. I grew up attending Church, and though I am not a devout attendee these days, I try to live using what I learned there.

But you hardly clicked on a baseball card blog to read my thoughts on Religion. And don't worry, I won't wander off to Politics either by showing one of the Presidential candidate cards upside down or something.

That leaves a wonderfully famous third topic. Your subconscious is already thinking about it now. But it absolutely can't be found on baseball cards, at least until someone makes an insert set of A-Rod's ex-girlfriends, one of whom will again be in the stands in Boston tomorrow most likely. To find that on cards you'll have to wander off to Google this year's WWE cards that always sneak into my eBay searches. Hey...those kind of have a Sea Turtle design.....maybe I should do some more homework....
Posted by BaseSetCalling at 12:02 AM
Email ThisBlogThis!Share to TwitterShare to FacebookShare to Pinterest
Labels: 13 Update, Cross Card, Lines