The other day I went out to buy new baseball cards to watch the World Series with. Oh, sure, I already had a bunch of Update cards from a Hobby Jumbo, but, well, you know. I need more cards. 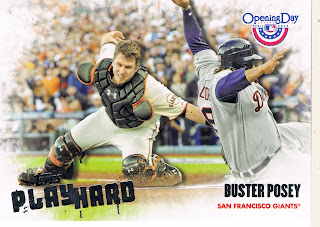 Of course what I really need is parallels, and to get parallels I need more than extra base cards to trade for them. I need extra parallels. And that means buying baseball cards from the big colorful Box stores that sell boxes containing colorful baseball cards.

So there I was in Wally•World a whole week after the release of Update. And they still didn't have any. So it goes living back in the woods you see. So here I am on World Series night, posting about Opening Day Baseball cards. It's all 93% of teams have right now. Next year.

Because instead of new Sea Turtles I found a couple of these mysterious Opening Day blasters that could only be found at Wal•Mart this spring. And, until the other day, seemingly only at Wal•Marts south of the real Mason/Dixon line, the Chicken Biscuit line.

What in the heck is the Chicken Biscuit line? That is the true division between the north and south in our country. I think it has replaced The Onion's version of the Mason-Dixon line, the I•Hop/Waffle-House line, because Waffle House keeps marching steadily northward. Smart Yankees.

In the south, every fast food joint everywhere sells chicken biscuits. Even Burger King, and their breakfast menu is otherwise terrible. A piece of deep-fried chicken, on a biscuit. Yummy. In the north, no one sells these. Stupid Yankees. Mickey D's had them available nationally for a time a year or two back now, but they cancelled that menu item in the north, probably due to lack of sales. Stupid Yankees.

And I only found these special blasters to the south of that line, until yesterday.

I have no idea on the mysteries of baseball card distribution. And I am very, very sure that I had looked at the card shelf in that particular Wal•Mart a couple three times this summer, and those variant Opening Day blasters weren't there. I almost took away from the experience that someone at Wal•Mart dumped these 7 month old blasters on me, instead of crispy fresh packs of Update, because I was in the only town that would be stupid enough to buy them.

So I bought them. Because I know what was in them — baseball cards I still needed. That Opening Day Highlights checklist that could only be found in these particular boxes. I scored 3 more of them:

And lots of other fun cards. So, finally, after my team is all heading for surgery and retirement parties and golf courses, I typed in my want list of all those nifty little Opening Day insert sets. And I am reneging on what I mentioned in my spring post about these cards. I do want to Chase the whole set of them, needing only 4 more of them. So I apologize to the Roy Halladay collector who asked about that card who I then turned down, despite writing they were up for trade. My very bad, and I do feel bad about that. So I hope I can find that email, &/or that gentleman is reading this again, because the good news is I also pulled that card this time, so now I have a double of it available. But only for that one guy that I stiff-armed on it.

My list follows shortly. I only have about 3 ~ 5 weeks left to set up trades before I get to start eating chicken biscuits for breakfast. And thus living without the bulk of my collection, either my old one still in storage, or my new 2011 and onwards one. And I am also probably going to start up an account on COMC to use up all my doubles, so a lot of the long lists of cards on my trade lists will disappear then too. So if you want to trade me all your 2013 Topps Parallels like I want you to, start shopping my lists. I'll try and add lots more stuff real soon.

I really liked the Opening Day inserts. I need to move on to other card projects tonight yet, so I'll only show you one more before you can start finding me all the remaining cards I need.

I would like to comment on the header picture card for this post, the Buster Posey "Play Hard" insert. I liked the nearly tie-dyed border on most of the other cards in the set, though it can't be seen on Posey's. I thought it was ironic that Posey is tagging out Prince Fielder on the card in last year's World Series. Fielder and Third Base Coach (at the time) Gene LaMont took a lot of heat for losing on that play, but of course all baseball fan hindsight is 20/20 (and usually ridiculous). Fielder was out on a very close play. But who, then, is Playing Hard on this play? Fielder is, I think. Wouldn't it be Playing Hard to block the plate? Something Posey definitely didn't do here, though no one would call him on that after what he experienced, which is explained on the back of the card.

Maybe this year's World Series will see the very last plate blocking play in the Major Leagues. We'll see. The Rules Committee is likely to make a Ruling on the subject soon.

I'll give you one more card before my list ... get yours ready now ... I have wanted to see how these beauties would scan ... 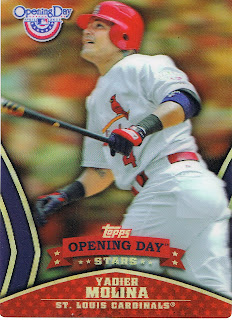 ehh, not so much. Much better in person. Now, Let's Trade!

I know the Cabrera and Fielder cards weren't actually produced. But a few slipped out into the wild anyway with big holes punched in them. You should send them to me.