Finished a page today … I'll change the numbering system again next time. I finally got it figured out. I think. Here 'tis: 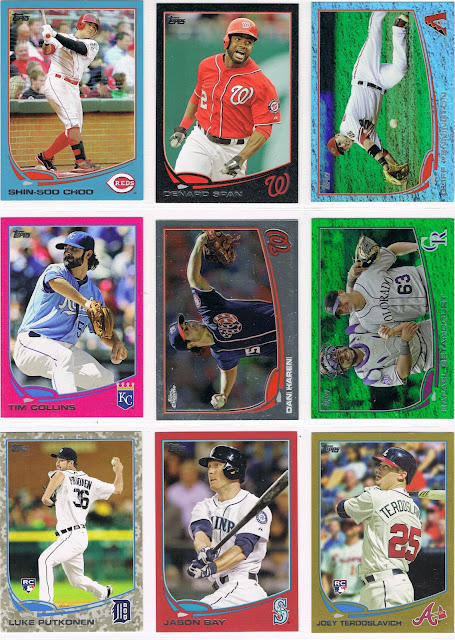 Yes, I was glad to see this one. The first page from the Update part of the set.

It was a tough decision to attempt extending this project to the Update cards. Without two key decisions by Topps, it wouldn't really be possible.

What's that Dan Haren card there in the center … what does that logo say? Chrome? Yep. I am using Chrome cards for the all-parallel Update collection.

It really wouldn't be possible without them. Last year, Topps issued a small set of 55 cards from Update done up in the Chrome style, though, surprisingly, without quite the hoopla they put in a regular Chrome set - just two parallels (Gold and Black), and one quite lame insert set. These were the "Mega-Boxes."

I enjoy my project as it moves along, but for the Update cards, several possible parallels don't exist - Toys R Us purple, Factory Set Orange, Wrapper Redemption Blue Sparkle, and Wrapper Redemption Silver Slate. and Opening Day Blue Foil. Wait. Opening Day is a different set. So is Topps Chrome. That helped me rationalize a little, since I do use Opening Day Blue Foil in the Series 1 and 2 pages where I can. The only thing different are the card #s and a logo on the front; the photo and the Turtle remain the same on the vast majority of cards. Shin-Soo Choo, though, got the most different Sea Turtles last year, with 4 different photos.

But this begs a certain question - why don't I use all sorts of the various Chrome parallels for this project? I considered it. With these Update cards though, the only two parallels, Gold and Black, were the same as two of the base parallels. This is also basically true of the standard 220 card Chrome set, excepting at least the Sepia and Atomic parallels I still hope to obtain an example of one day, perhaps a few others.

And overall, I'm not a big fan of Chrome cards at all. For fun and to complete my full look at the Sea Turtle design, I have a set of the 2013 Topps Chrome base, mostly to look for image variations from Series 1 and 2. And in the long run, I am going for a collection of the Xfractor versions of those cards as you can see there on your right or through this link.

The use of the Update Chrome cards led to a different problem - there are a few pages that don't have a card from Update Chrome. A pickle. I can complete such a page, but it's not easy. I'll show you one day, I hope. I do have a couple that are over the difficult part….

Of course another Topps decision aside from the Update Chrome set also made that page possible - the introduction of a new parallel - the Sapphire. I quite like them, a pretty baseball card. The first thing I have to do completing an Update page is find the Sapphire, before I can worry about the Pink, Black, or Camo (I also need one of each on each Update page - ugggh. Tough project.)

These come in an edition of /25, which is quite unfortunate. In 2011, the Update release also included a new parallel that was extended back to the Series 1 and 2 cards already released - the Hope Diamond, which came in an edition of /60. Much easier to get a hold of.

Incidentally, I have been trading some with a collector who is not only putting together a complete set of this year's Sapphires, but is only 3 cards away from a set of the 2011 Hope Diamonds - 280 Andrew Bailey, 497 Alex Avila, and US207 Frank Robinson. If you might know where any of those three cards are, I can get you in touch with him. 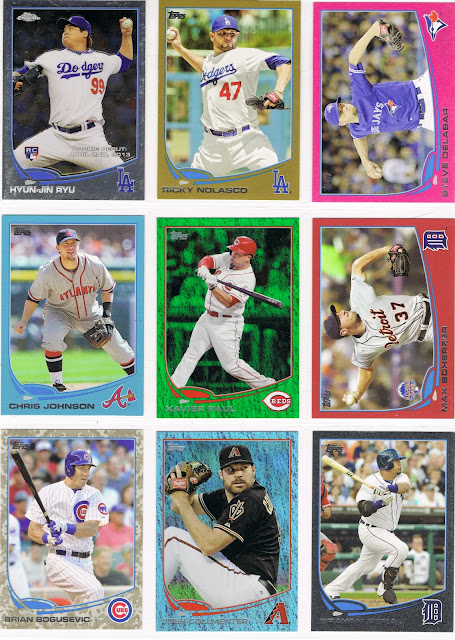 This was indeed a lucky 13 page. For the first time, I have run into a page of 9 cards with 7 blue teams.

And out the window go my color-choice goals for this project. Where? What? There on the Chris Johnson card. A blue Sea Turtle on a blue parallel. I picked him because at least his team logo has the most red of the possibilities here.

There is no escape. A blue Emerald looks terrible. A blue Sapphire would be the very problem I am describing - blue-on-blue. Yet this page almost holds one example of each possible parallel I can use for the Update cards, save two: printing plates, Silks, and Platinum 1/1.

So now I have finally been pulled all the way into the bizarre world of 21st Century baseball card collecting, which for so many is no longer about completing a simple set of baseball cards, or obtaining a desirable Rookie Card of their favorite baseball player. I've questioned it before, but what, ultimately, is really the point of owning a 1/1 baseball card? Particularly when the 1/1 cards are just a color variation from an otherwise identical edition of that same baseball card? Yes, it makes people happy to own one. I shouldn't criticize that. But I just can't wrap my mind around such a pleasure I find so strange - I own this, and you can't.

And now I want one. It would give me my own strange pleasure to replace that Chris Johnson card with the Platinum 1/1 version. Or any of the other 6 blue cards on this page. I could settle for a Printing Plate I guess, though that is not my first choice. I have one on another page, though at least I pulled that one from a pack myself - my first 1/1. You never forget your first one. And I have purchased one other Printing Plate, for one of those pages with no Update Chrome available.

Silks, ahh, another topic for another night. I should probably wrap this up and click over to eBay. There might be some new 2013 Topps parallels listed...
Posted by BaseSetCalling at 11:11 PM
Email ThisBlogThis!Share to TwitterShare to FacebookShare to Pinterest
Labels: Beguiling Binder Page, Parallel Problem