Well it's that time of year. The last baseball cards have arrived. The last ones for me anyway. I'm sure Topps might still have some set of stitched leather $100 / 2-card pack cards that feel like a pack of smokes in your hand still to arrive, but I will never ever understand those kinds of cards.

Normally, Chrome cards aren't for me either. ...All the Way to the Backstop asked recently if anyone truly likes them. Obviously, lots of people do. But lots of people don't. I'm more in the latter camp, even though I love shiny things. I like "foil" cards quite a bit, though perhaps in more limited doses.

This year though I really grew to like the basic design Topps uses in their 'Flagship' set, and then Opening Day and Chrome. I was intrigued by the image variations in Opening Day - I think there were 7 of them, I'll compile them for you sometime soon. That led me to wonder what I would see in the Chrome set; turns out there are a whole lot of Chrome-only Sea Turtles. I'll assemble all of those for you sometime too.

Then around 2 weeks ago a new bale of Sea Turtles made it to shore, though they could only beach themselves in the card aisle of all the usually suspect Big Boxes. What the heck is a "bale," you ask? This high tech device under my fingertips that runs my life tells me that is a correct way to refer to turtles, plural. The things you learn these days.

These last Sea Turtles hail from the "Update Chrome" set. And more specifically, they only hatch from inside the Topps "Mega Box." They even have card #s that reflect this, MB-1 through MB-55. And of course two serial #/d parallels, Gold refractors at /250, and Black refractors at /100, or maybe /99. I forget, though I didn't pull any blacks. Also included in the set is one insert set, "Postseason Heroes." 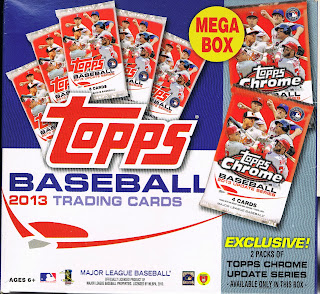 For me this is another Topps product chock full of pluses & minuses. If I had known it was coming out, I probably would have purchased quite a bit less Update from the red store and the blue store, as to get these Update Chrome cards you also receive 5 packs of Update. I'm not sure why Topps even bothers with all these "packs" inside boxes any more anyway. Put the amount of cards I get for a price in a box and be done with it, like the hanger boxes. I would have purchased all hanger boxes this year, except I liked the white foil Chasing History cards only found in the rack packs, and I bought the stupid blasters because of my addiction to parallels.

The big plus of this last small set is that I pretty much could not do a Parallel set of Update without it. I was stuck at 8 parallels, not enough for one per slot on a binder page, unless I wanted to use 1/1 Platinums, 1/4 Printing Plates, or 1/50 of the "Silk Collection", which are just dumb.

But with these Chrome Updates or whatever you call them - when there is only 55 of them, it's not really a "mega" set - I could assemble 9 colorful, or shiny, cards per page. I could have just done that for my Series 1/Series 2 parallel sets, i.e. used Chrome cards, but I simply prefer glossy cards to Chrome. And really I would rather just have a full set of actual cardboard baseball cards, in a more perfect world.

The biggest minus of the set, aside from the predatory packaging "available only in this box," is that as near as I can tell, there are absolutely Zero new Sea Turtles in the 55 card set. I need just 2 cards now after some careful shopping, the "41 Puig" - i.e. MB-41 Yasiel Puig RD (Rookie Debut), and MB-54 Chris Davis HR (Home Run Derby). I have plenty to trade.

But I'm fairly certain every card is 100% identical to the originating Update card. The Yasiel Puig RC, a regular card, not the Rookie Debut, is cropped differently than his Topps Chrome RC, but then so is the Update RC. The Puig checklist card is not Chromed so he only makes it onto the checklist twice. As does Jose Fernandez and Topps' love-child David Wright. Neither of those 2 rookies have played in the post-season before this set was released of course, but David Wright has, and he appears on the insert set as well.

Some of the cards in the set are true Chrome Rookies, as the players did not appear in the Topps Chrome set, for those of you keeping scorecards at home. I forget the total, so your scorecard from this post won't be too useful. There are also players that were traded in 2013, All-Star cards, Rookie Debut cards, and even some of those exceptionally pointless Home Run derby cards, which is how David Wright makes the checklist twice.

So much for facts and figures, let's get to a card and a bunch of twisted opinion: 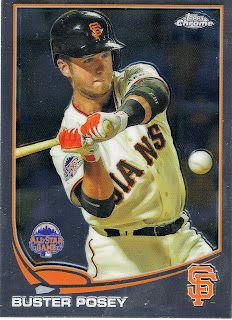 For some reason, I like it when the baseball itself gets "Chromed." I like these types of cards, though it takes a bit to realize there is little chance Buster is going to bust that pitch; and indeed he struck out swinging in his only at-bat in the All-Star game. But it always amazes me when modern photography can capture a pitch in flight and still show you the seams, which of course is all seen somewhat better on Posey's regular All-Star card in the Update set.

One of my favorite cards in Update also survived the rounds of Topps voting on Sea Turtle island to make it to the Chrome beach: 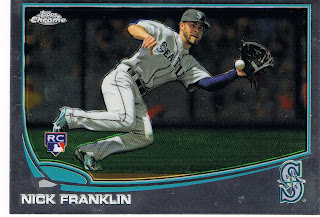 The other thing I really like about that card in Update is the background, which is actually a shot from a Spring Training game - 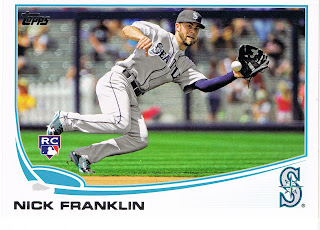 -which can be deduced from all the blurry fans behind the chain-link outfield fence.

I like baseball cards created with Spring Training pictures, the way vintage baseball cards were made. Except when a whole lot of a set is made from staged Spring photos all shot from the same spot. Cough, cough, Archives, cough, cough. That gets to be a little much.

Those fans of course disappear during the "Chrome" processing, whatever it is, and that is my basic complaint with Chrome cards. They obliterate all context from the image, which is something essential to me in a baseball card. Even a profile head-shot should clearly have some baseball something in the background, like a stadium or a dug-out. Chrome cards never have that.

I also like how my scanner revealed the teal accents on Franklin's shoes. Nice west coast style points there, Seattle. Now if only style points somehow scored runs. The scans look similar in revealing that but it is much more clear, in-hand, on the regular base card.

Overall my Update parallel pages will look a lot snazzier with these cards on most of them. About a half-dozen will still need those goofy Silk Collection cards, and I have been wanting just one Platinum for the project, so I might actually soon buy my first (and probably last) 1/1 card. Don't you go and bid on that one, now.

The final indignity of buying these "Mega" boxes for my project is the inserts selected, a straight copy of the PostSeason Heroes cards from Update, which I do enjoy. But I really can't see any purpose to "Chroming" a full-bleed / borderless card, particularly when the bulk of the cards are actually Night Cards. But Base Set HQ doesn't make these decisions, Topps does.

Let's see if you can tell which card is which. When I upload multiple images simultaneously, I can't even predict what order Blogger will do it in, so I don't know either. 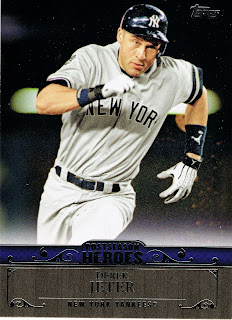 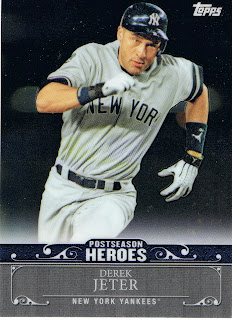 Good luck.
Posted by BaseSetCalling at 1:58 AM
Email ThisBlogThis!Share to TwitterShare to FacebookShare to Pinterest
Labels: 13 Chrome, 13 Update