Blah. Baseball season is over. Thankfully, you can still buy cheap as cheap can be baseball cards 364 days of the year. Let's see what fun I can have for only a dollar. 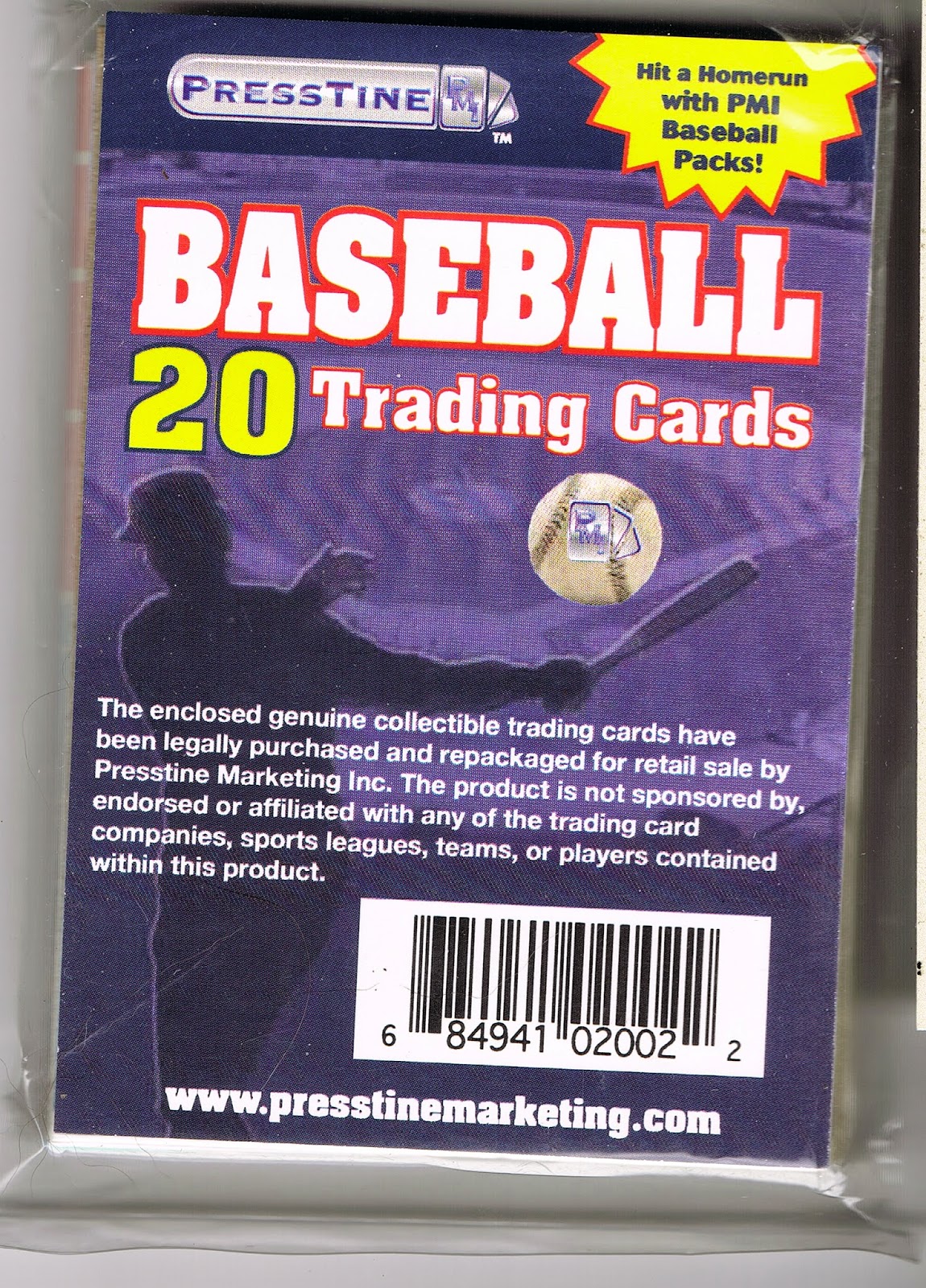 Of course, these re-packs come in clear plastic packages, so you can select your first card from a couple dozen in the box: 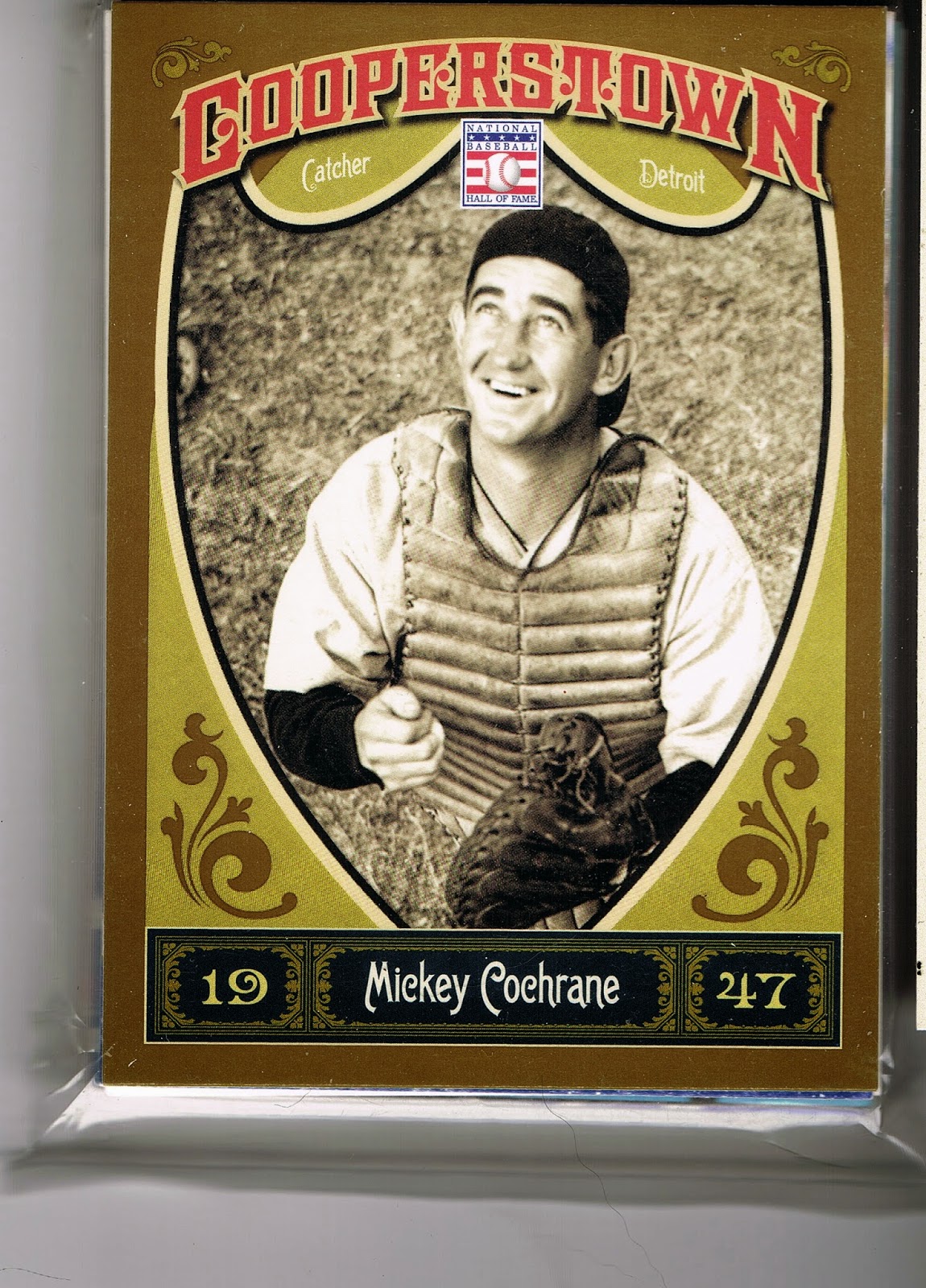 Does this make me a pack-searcher? Horrors. I call it Window Shopping, and this post will be indexed back to be probably Window Shopping #2, some day.

I've always wanted one of those Hall of Fame cards. Not enough to buy a basically over-priced whole pack of them. But when it's only a buck, with the promise of more fun to be had inside, sure thing. And it's a Detroit Tiger Hall-of-Famer - not all that many of those, so I figured I should brush up on my baseball education on another gloomy day underneath the Arctic, errr, the Great Lakes Cloud Machine.

OK, OK, it wouldn't be a pack rip blog post without showing the first card. The free sample doesn't count, it has to be the first card that you couldn't see: 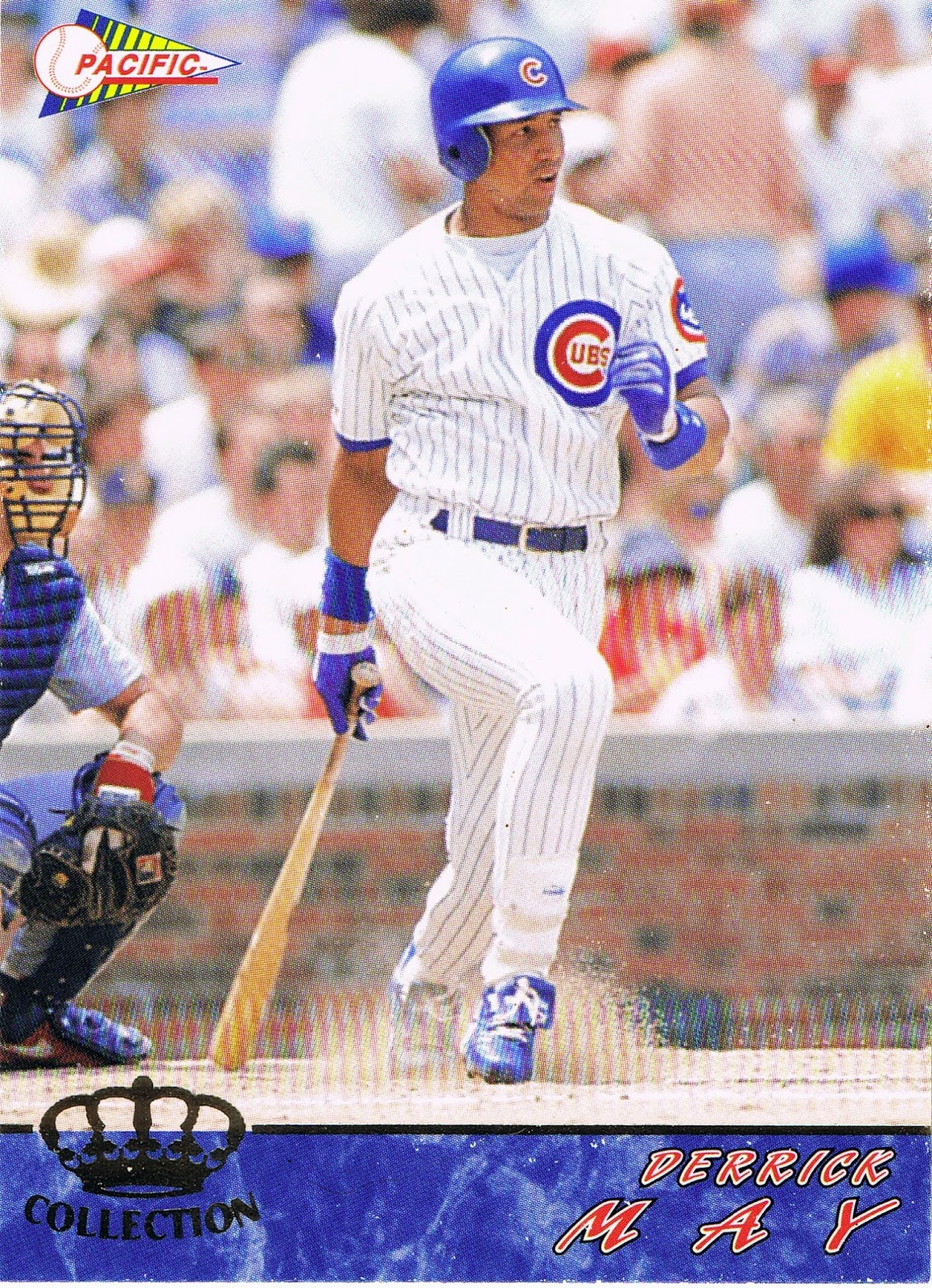 Nice enough full-bleed effort there from Pacific I guess. I like when I can tell it's a home game by what's in the background of the picture. So unlike today's cards.

But that one will go in the special box of 100% completely random cards I have pulled from cheap re-packs. I'm going to sell them. Yep. Junk wax, for sale. How can I achieve this miracle? I found a card in one of my repacks that showed me the way. You simply sell them by the pound. No need to sort them by year and manufacturer, just stack them up.

My dream is to sell these repack cards back to the repacker. I might even just put them all in a box and send them there on my own, and ask for a $1 pack of cards back in the mail. Just for the entertainment of thinking about how many times one piece of worthless cardboard can circulate the USA until it finally finds an appreciative home. I hope the corners don't get dinged along the way and ruin the card so much that it becomes worthless.

But let's keep flipping through the pack: 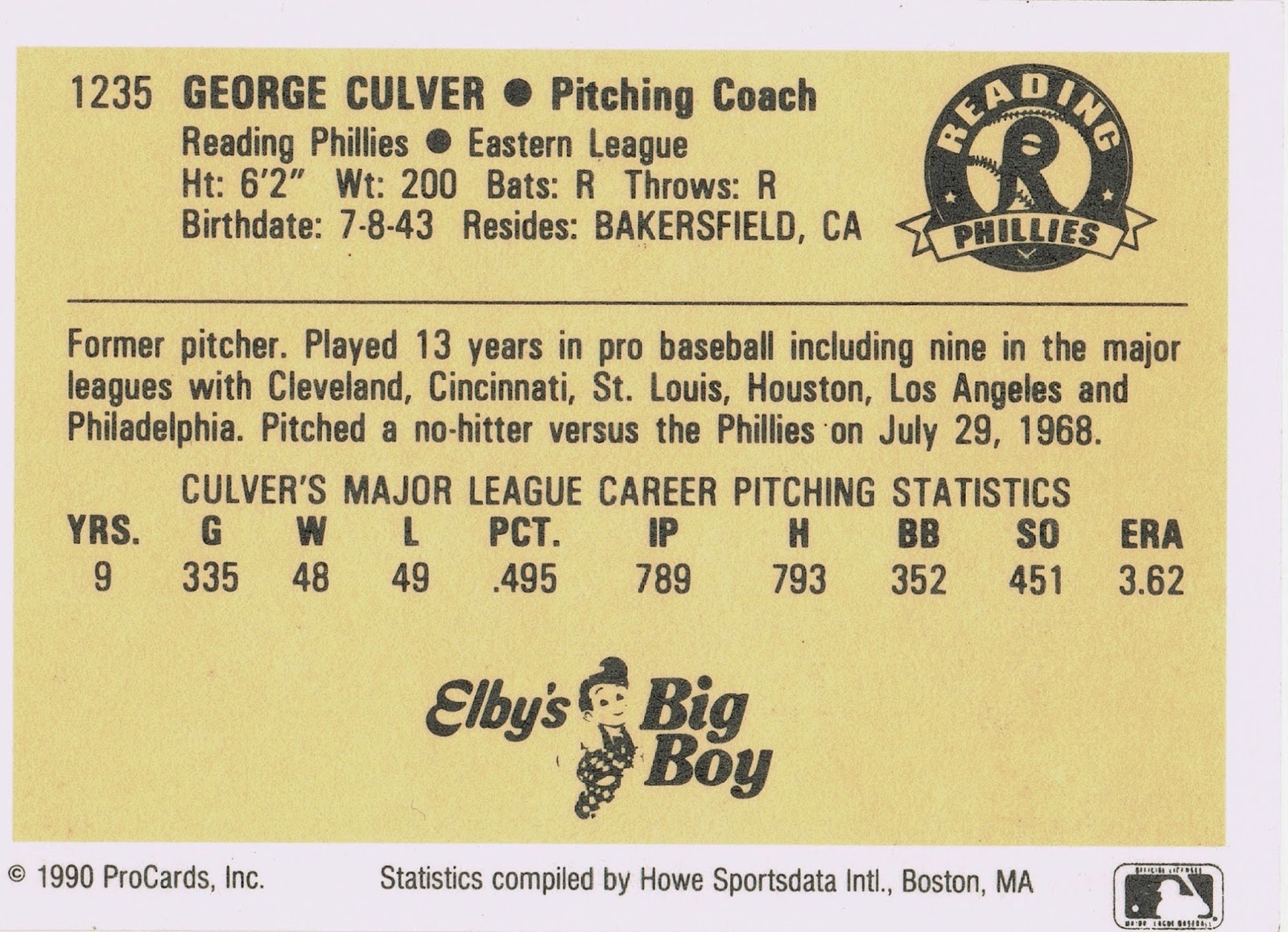 Whoa. The card is in the pack backwards. This never, ever happens when Topps Chewing Gum Company is in charge. I think if it did, I could still remember what the school bus smelled like that day, because that would straight up be an Earth-stopping event. Topps does lots of endearingly odd things, but the baseball cards never appear in the pack like this.

This card might be some sort of indicator of the baseball card tsunami approaching the shore there in 1990. The pitching coach of a minor league baseball team. But, then, by reading the back, I learned about one of the baseball immortals that has pitched a No-Hitter, even if I have never heard of him before. Which is kinda why I buy baseball cards in the first place. Mickey Cochrane there on the top of the pack knew what was up.

I think I like this idea of finding my new cards aseball-ackwards. Let's see where it takes me: 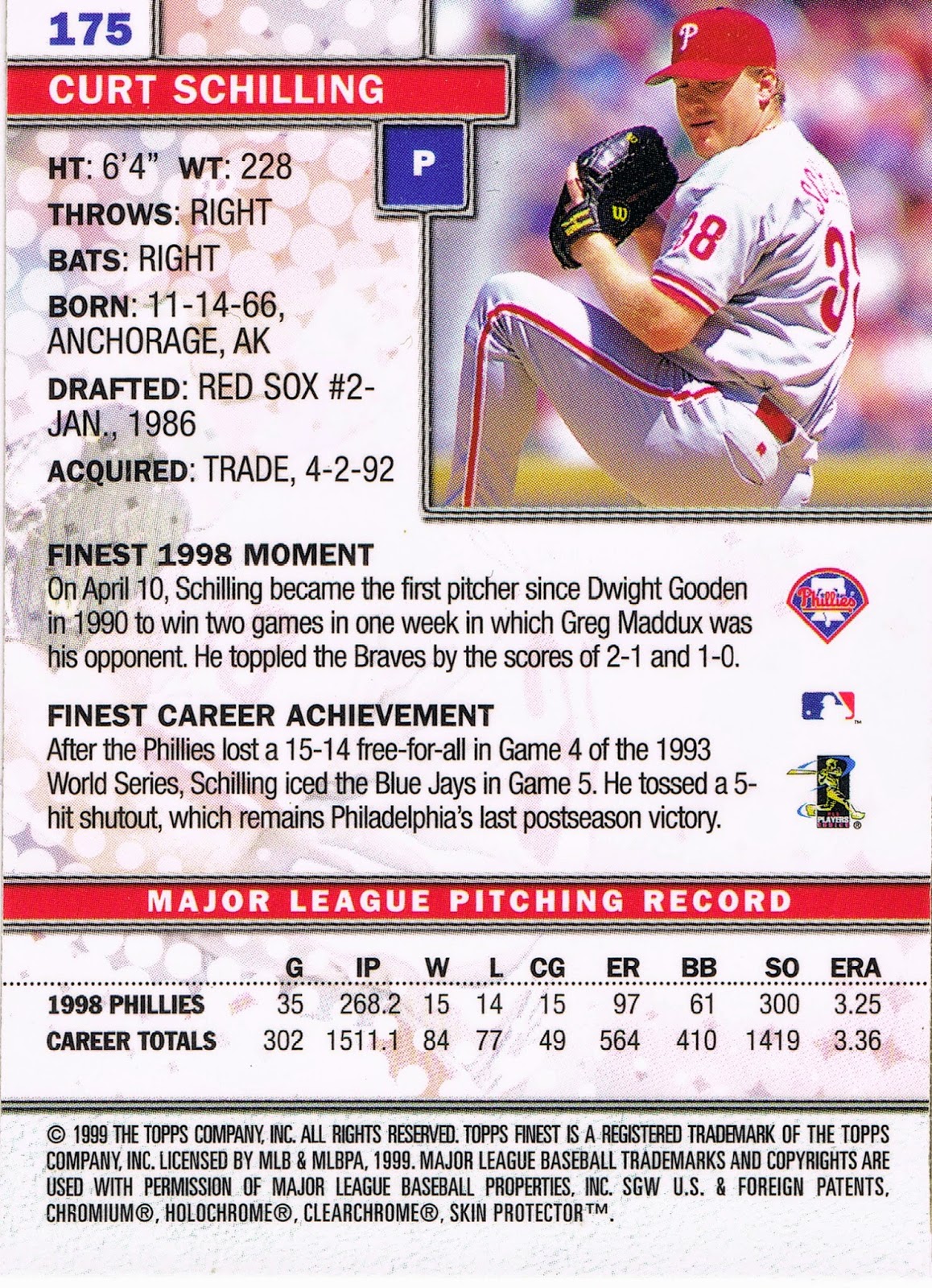 1999 Topps Finest! This card has got to be worth, like, way, way more than the 5 pennies I paid for it. It might even be a /100 Gold Refractor and my winning Lottery ticket for today!

Alas, it was not to be. I'll save you from seeing the front of the card, so you can enjoy it more when you pull one of these from a repack. Actually a pretty nice baseball card all the way around. I learned that Curt Schilling was born in Alaska. Over the course of his career, this must have delighted the card-back writers toiling away on antique word processors all over America in the 1990s - "The only major leaguer born outside the lower 48 to pitch a Shut-Out in Florida…" And it uses the word "iced" - baseball history foreshadowing?

Topps Finest, of course, is a set with the Protective Coating you are supposed to Peel And Remove. I took a scroll through COMC listings to see how much money I made on this particular investment - at current market rates of 65¢, I made a 1,300% profit on this one, where else but baseball cards can you get rich quick like this? But on every single one of the COMC scans, not one single baseball card collector had ever Peeled And Removed the Protective Coating to fully enjoy the imprisoned baseball card beneath. What will I do with this finest of baseball cards? What do you think?

Ahh well, I'll wield the scalpel on my own time. Your time is more valuable than that, I hope. Let's keep reading card backs: 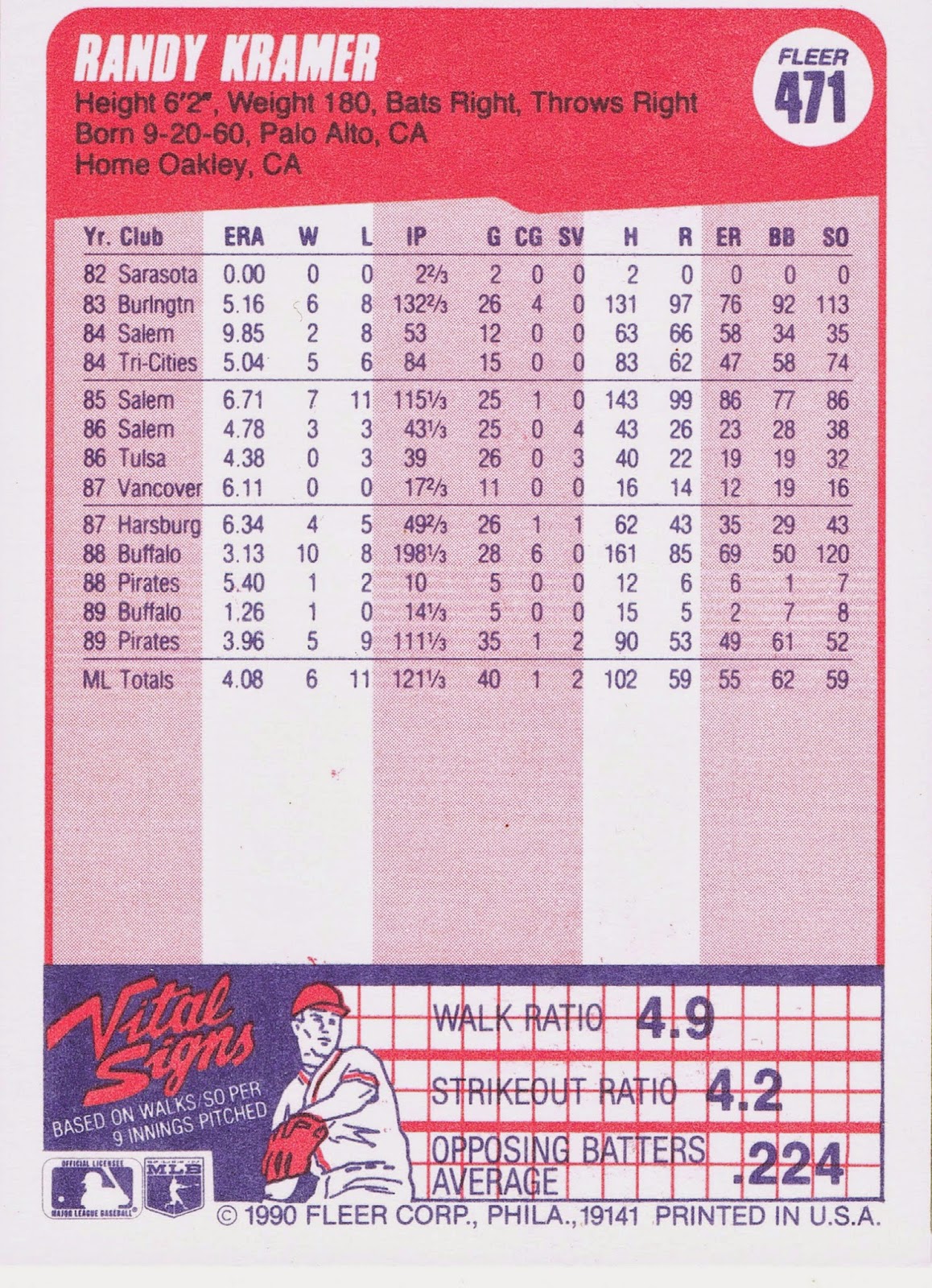 Another Fleer set, another set of useful baseball player statistics. In the year 1990, when no one had yet heard of Bill James. Although to be honest, K/9 and BB/9 aren't actually "Saber" stats. But they are a darn useful way to think about a pitcher (check out Koji Uehara's #s in this category sometime). This is the second Fleer set I've found lately with such usefulness on the back. I always liked Donruss card-backs with their contract status information. Someone, somewhere, needs to write a card-back that assembles all this stuff. Instead, on this year's Topps we get ever-so-useless "Rookie Facts," though of course they did finally dip their toes in the Saber pool with including WAR on the cards, and printed saber-metric short-print card-backs, so they'll catch up to 1990 Fleer eventually.

But I know you don't really buy even a one dollar pack of baseball cards for the backs. The action is on the front: 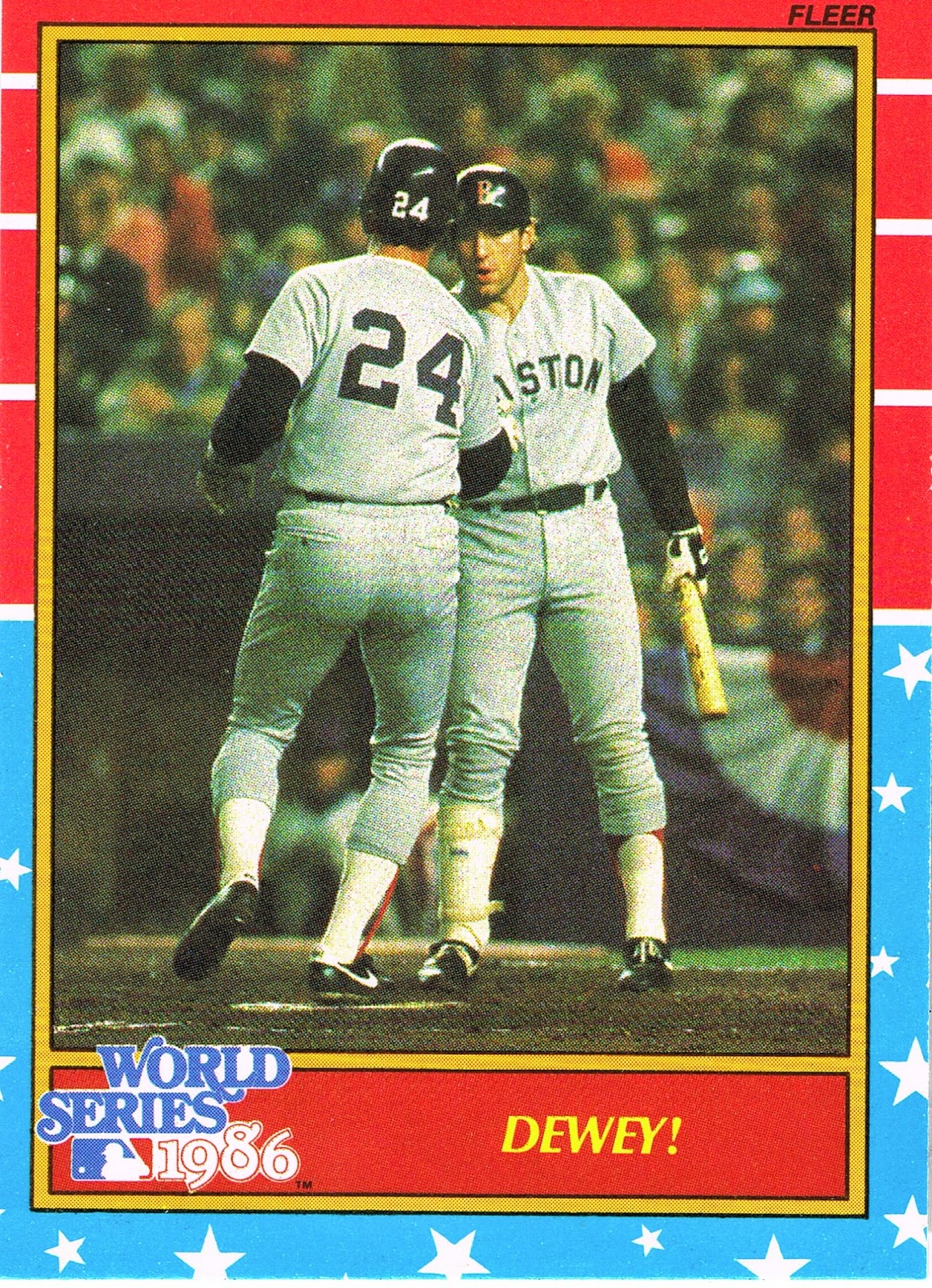 Yes! A night card. A World Series card. A nickname card. I didn't recall from my childhood > teen years that Dwight Evans was nicknamed Dewey. Probably because Topps never put that on a Dwight Evans card that I can recall, they seem a little shy about using nicknames sometimes, and that is where I got most of my baseball information aside from listening to Ernie Harwell. He was probably too busy telling us about 1930s nicknames to use a 1980s nickname.

That 1987 Fleer card there is a heckuva card. # 9 of 12 - any Red Sox fan should own this insert set. Mets fans, ehh, probably not so much. But 12 World Series cards? Brilliant. 4 sharp paragraphs of baseball and player history on the back. I also did not recall that Evans was the only Red Sock to play in the all-time famous '75 Series, _and_ the also all-time famous '86 Series. Once again, the reason I buy these things with my hard-earned dollar.

This card has one slight defect though. I could remember enough of my baseball devouring youth to recognize that Red Sock #24 in the 1986 World Series was Dwight Evans. But with just a nickname and a uni #, I'm sure some west coast fans might see this card and wonder what random rookie was crossing the plate for Dwight to congratulate there. The defect is that I generally never like cards that don't show a player's face. 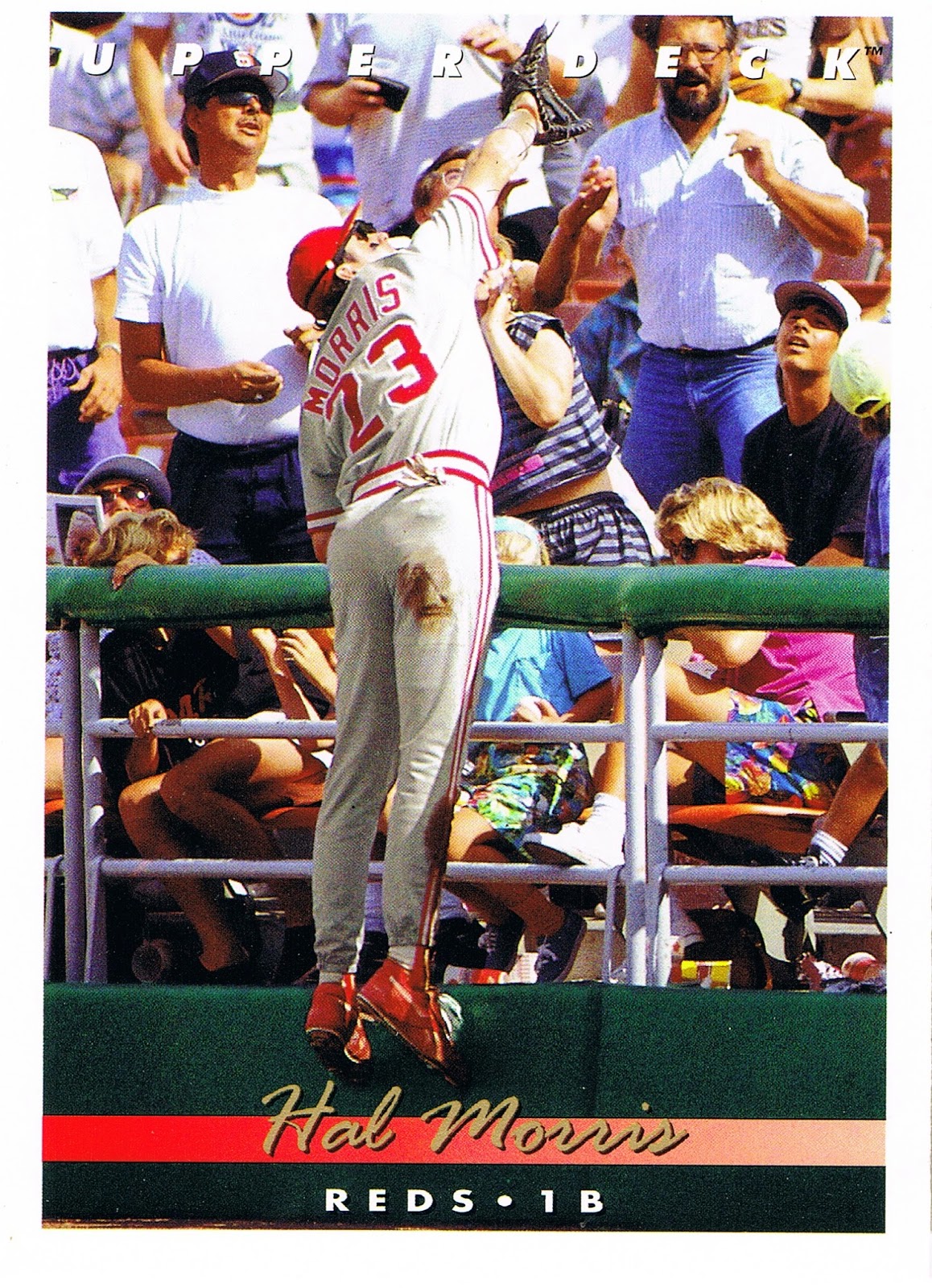 Except for a small nagging defect I'll return to shortly. Overall a really good card though.

I always like cards that clearly show the fans. Again fairly rare today. But I have to wonder about this one fan - 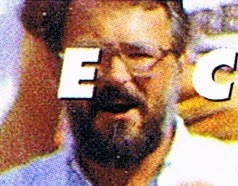 Could it be the saber-wielding wizard of stats himself, immortalized forever on baseball cardboard? 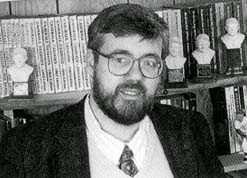 I dunno. Here at Base Set Calling, I report, you decide.

But as I was typing, I like that Hal Morris card; I can forgive the very best of the best action shots obscuring a player's face. I just wish  U P P E R  D E C K would have stuck with their traditional small logo off in the corner somewhere, as on this 2009 edition: 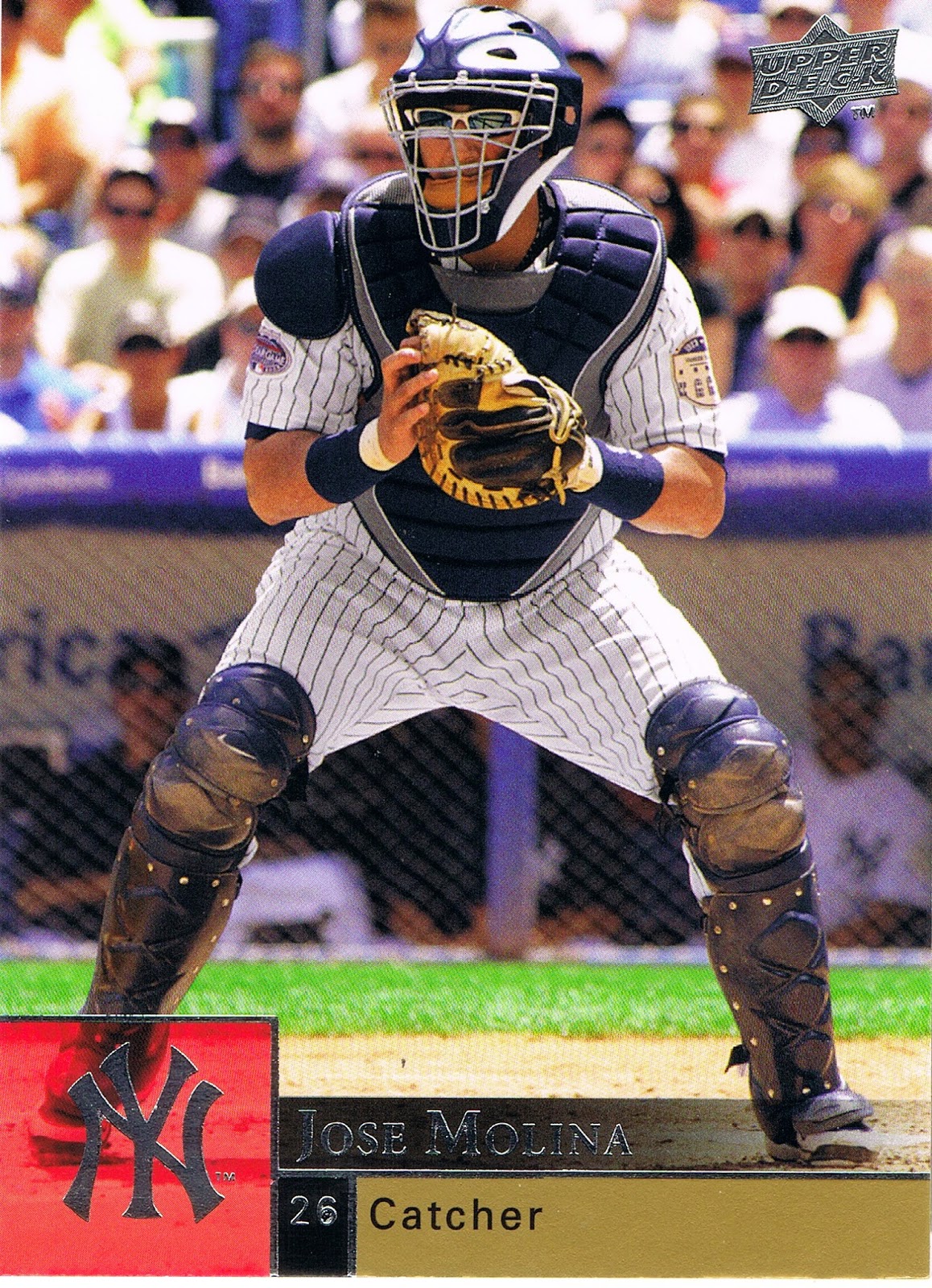 This card intrigues me because now it looks like the statistics have left the back of the card and migrated to Jose Molina's left shoulder patch: 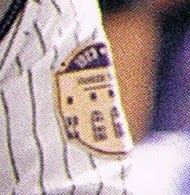 I have no idea what that patch is. I'll have to start my research via finding more 2009 baseball cards. Darn.

Of course, with a pile of 90s and otherwise junk wax cards (with the thorough un-appreciation of base cards in general in the hobby today, have we ever truly left the "junk" era?), the fun is in finding the weird cards: 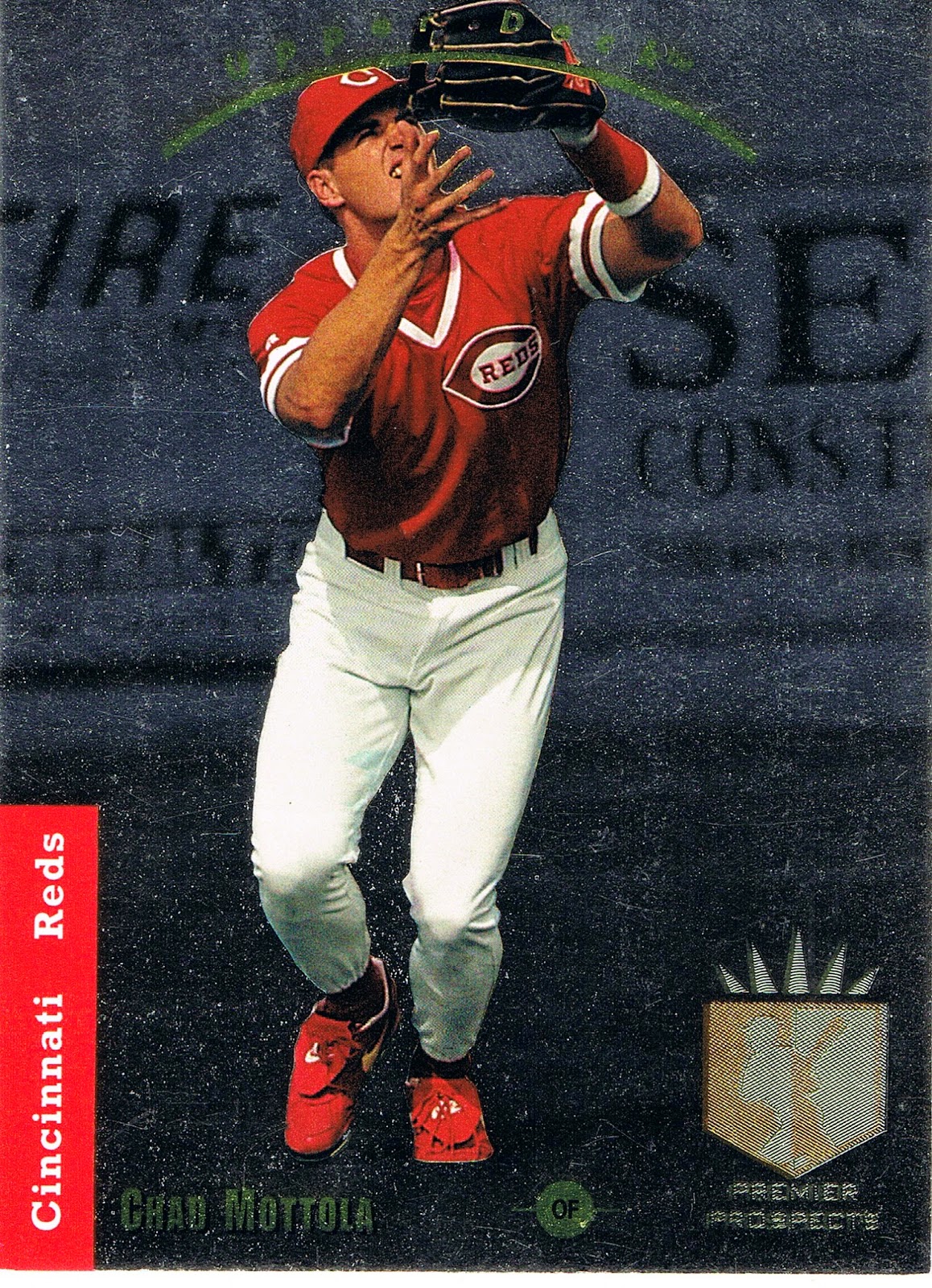 Yep, Chad, it is darn hard to see the baseball through all that foil gimmickry Upper Deck was already putting on prospect inserts already in 1992, particularly that just plain odd halo there in the design.

1992. Who would have thought it all started so soon? Who? 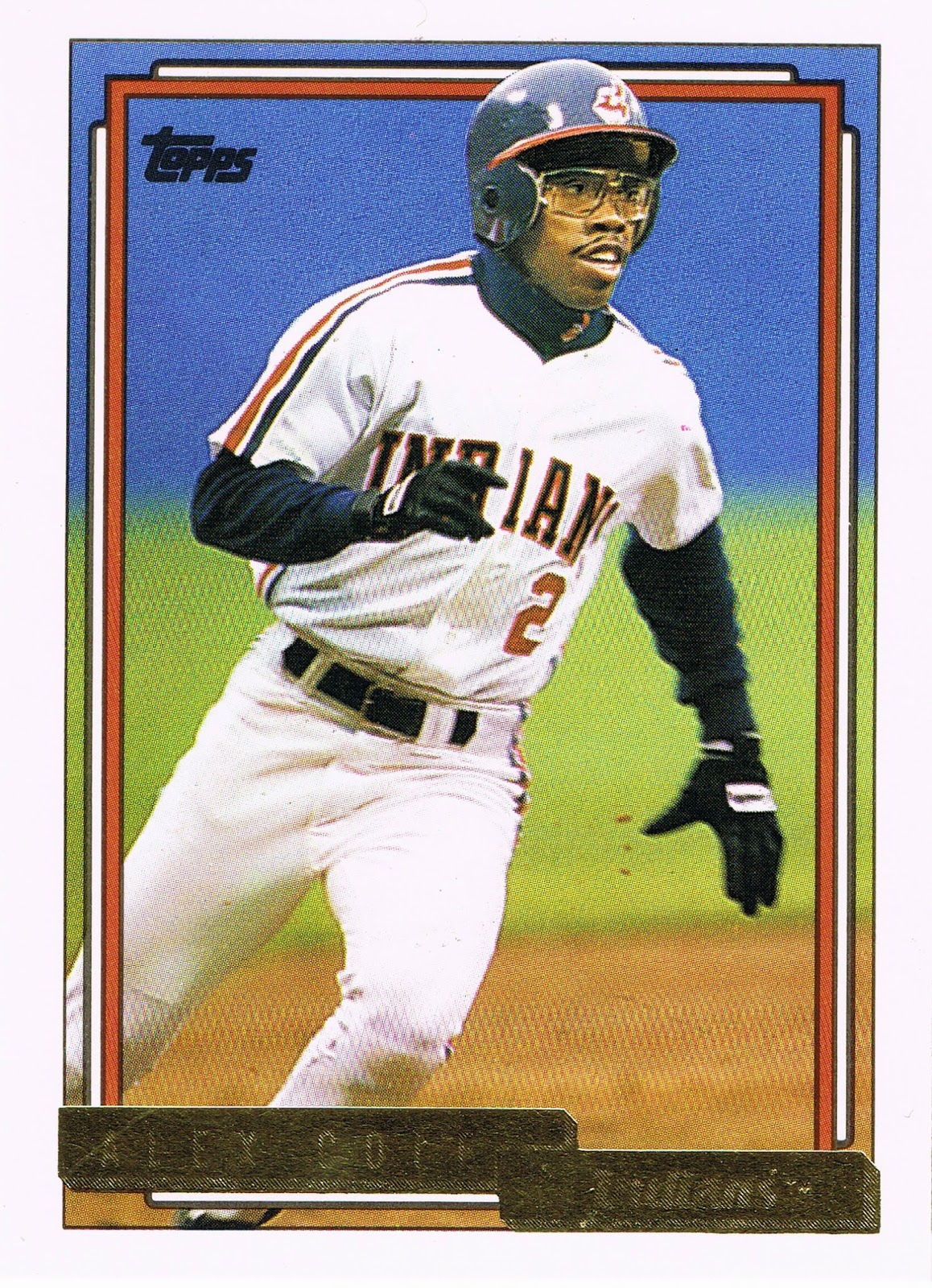 Urkel! That's who. I never knew Urkel played baseball when he grew up.

It seems that maybe Topps and Upper Deck got together during Hot Stove time 1991 and colluded on what goofy things they could do with the next year's baseball cards. They both went with pointless gold foil (more baseball card history in the making …. who put this repack together anyway?).

Meanwhile this card seems to be an example of another new concept we all needed so, so much - parallels. Unfortunately, my newly beloved Urkel baseball card is not a Gold Winner edition. How cool would that be - an Urkel baseball card that clearly told me I was a "Winner" right there under his left hand. You'll have to pick up your own repacks to be a Gold Winner. I'm still playing the Lottery on that one, but with a little luck, someday, I hope... 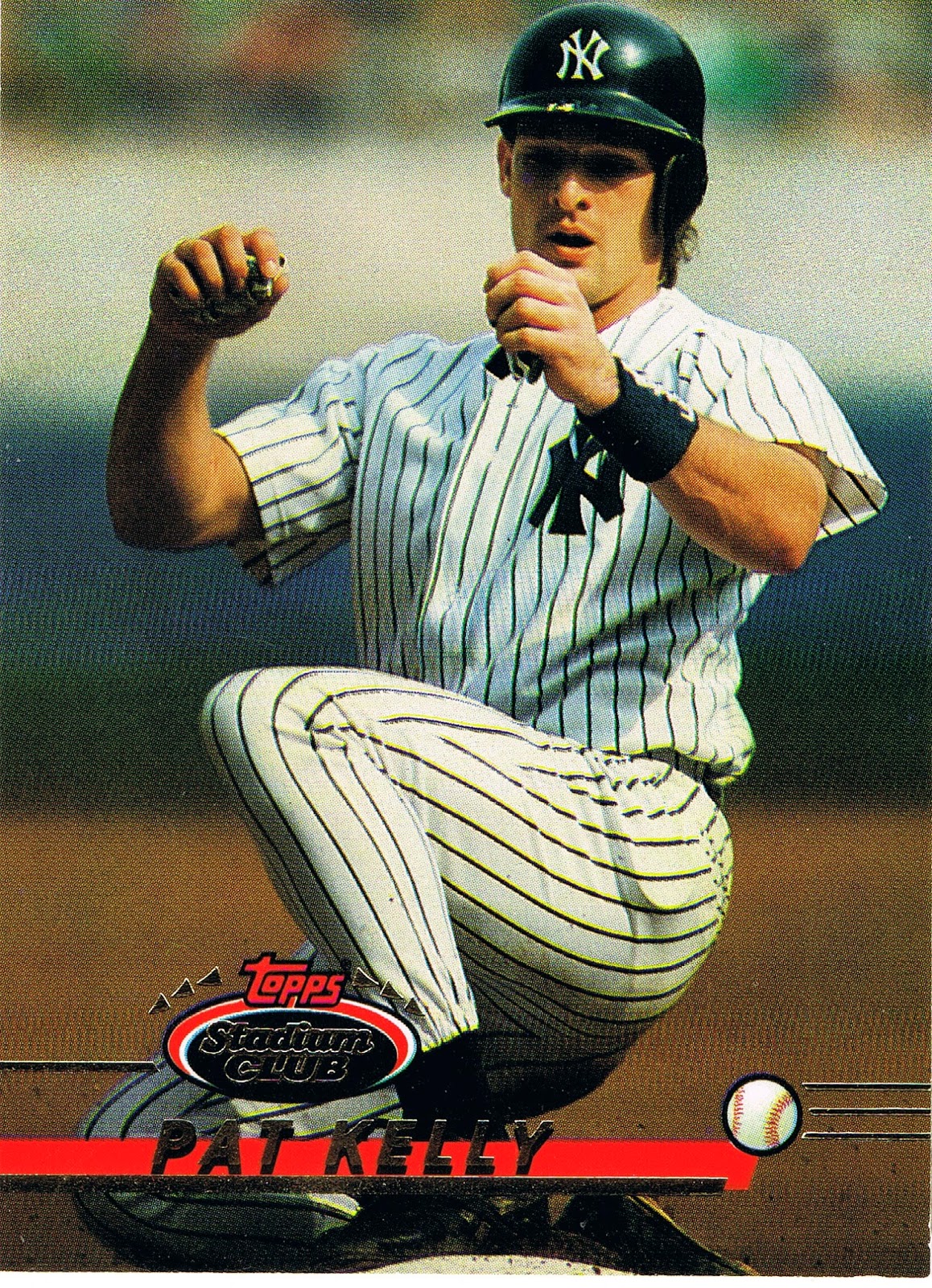 Aww heck, there's a winning baseball card right there. I'm not sure if Pat Kelly there is pantomiming breaking a bat over his knee like a real baseball bad-ass, or, since repacks are almost always exclusively 1990s affairs, he is just about to declare this $1 pack of baseball cards to be worth Two Thumbs Up AND a Snap!
Posted by BaseSetCalling at 11:22 PM
Email ThisBlogThis!Share to TwitterShare to FacebookShare to Pinterest
Labels: Fun with Repacks, Night Card, Patch Card, Those 90s, Window Shopping