You Can't Do That To A Baseball Card!

Too late. I already did. It doesn't much matter where I put the image of it, unless I bait and switch you. There's no baiting and switching in the world of baseball cards, is there?

That's not the baseball card that is the object of tonight's post. Note I said "object", not "subject." As soon as you see the victim, err, the card in question, you will know what is about to happen. 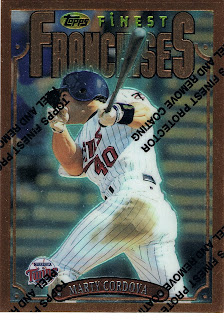 That's Marty Corodova, AL Rookie of the Year in 1995. He is about as well-known today as another famous Minnesota Twin Rookie of the Year, John Castino. I'm sure your Castino PC is just overflowing with cards, right?

It's OK. I learned who both of them were just today. Castino played in the early 80s. I have a good excuse for not remembering him at least - my team played in the awesome AL East back then. And we didn't have Baseball Tonight on every night drooling over Rookie awesomeness. Just these old timey baseball guys named Ernie Harwell on the radio, and George Kell and Al Kaline on the TV, all telling old timey baseball stories to their faithful listening audience. Rookie? Who cares about rookies on the opposing team? Why this one time coming out of spring training back in the early 50s there was this one rookie that you heard a lot about later, but back then he was just a rookie, so nobody knew who he was when....

A Cordova PC would have a lot of cards in it though, as his career went from 1995 to 2003 or so, when there were way more card companies than divisions in the Major Leagues. Too bad you didn't go all-in prospecting those guys, huhh? Rookies of the Year, their cards must be worth a lot, right?

I pulled that Cordova card from an intriguing repack you'll have fun with some other night here. I think I have one other of these Topps Finest cards hiding in the card stacks on the card desk somewhere. I think Topps gave me some sort of "first hit's free, kid" type sampler pack in 2001. I have one card from like 4 different Topps sets I never heard of again from that year.

That's a '61 Topps Mantle. Sort-of. It is of course a re-print, that came out as part of that same 1996 Topps Finest the Cordova torture card came from. Oh, wait, did I type that out loud? I'm jumping ahead of the scalpel here a little.

Anyhow I have to laugh at that Gem Mint Perfect 10 slabbed Mickey Mantle. Complete with protective coating! Slabbed to be safe even from nuclear winter, for all eternity! Mustn't remove coating and possibly damage valuable REPRINT card. It's Gem Mint! The Mick will live forever! You'll just never get to enjoy the actual unblemished image of that card, thanks to that Finest Protection. You have to pay extra to truly enjoy the real '61 minimalist Mick card. A lot extra. Step right this way.

I mean I can only feel pity for someone who would for some reason want that pictured card I borrowed from some website somewhere. I've always thought life is far, far too short to be that up-tight.

But getting back to our object tonight, Mr. Cordova. Topps is kind of egging me on here on the back of the card. Just plain instructing me not to respect this card. Everyone knows this type of card should simply be thrown in the fireplace with the rest of all that useless "base": 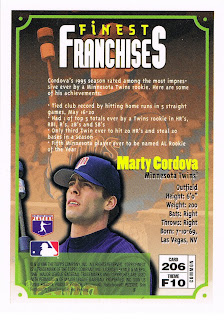 You might be missing the key subliminal instructions there. They aren't hidden in that faded-out repeat image backdrop somewhere. Nope, down there in the corner Topps tells you everything you need to know about Marty Cordova: 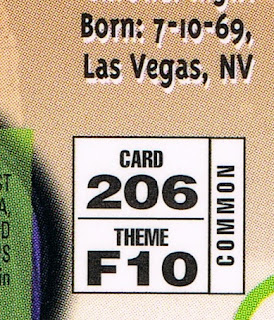 At least they were nice enough to put their Rookie Cup on his regular Topps card that year. I mean, it must have taken them several more years to figure out that they could exploit each League's Rookie of the Year by printing 1,309 cards of them the very next year in every set, sub-set, insert set, mail-in set, convention give-away set, soft drink set, Topps Employee Backdoor set (oh, sorry, this isn't an Upper Deck post), and what have you, sometimes twice or even thrice in those sets.

Back in 1996, they already had multiple sets, but they weren't quite prepared to feed that insatiable Player Collector jones as fiendishly as they do in the 21st Century. I mean, someone had to take up the slack in the market from all those card company carcasses littering the back roads to Cooperstown. Don't worry, just keep 26 dollars in your hand and the Topps man in his PR shoes and a big straw hat will hook you up. He's never early, he's always late. Only batting about .100 on timeliness this year in fact. Those Puig junkies are so demanding.

Anyhow, I digress. I'm sure your used to that by now. So, yeah, Marty Cordova: COMMON. Talk about your Topps Voodoo and the rest of poor Marty's promising and quite decent but sadly injury shortened career. I'm even a little scared there might even be 9 other Marty Cordova cards with alternate themes than Finest Franchise. Should I chase that rainbow? Does this mean no other team can offer the Twins' Franchise player a sneaky back door contract? I never understand those tricky sports contracts, and Topps never helps me figure them out either.

But what do I care anyway. COMMON. Strap him to the gurney. Send him to those smart-ass punks who mock pro ball players and their cards, professional athletes who will be richer both financially and life experience wise than some cynical internet flunky ever will be. I mean, who's baseball card life would you rather have lived, Dmitri Young's, or some guy sitting on 22,709 baseball cards from the 1990s trying to make not actually very funny snide comments about them? Dmitri sure knew what was up with those Gem Mint cards.

Ahh, gee, I digress again. And here I have Cordova all prepped for the operation. My finger nail specially sharpened and everything. The instructions are right there in front of me, they remind me a little bit of when Bullwinkle told me to break the channel changer knob off my parent's TV set so I could be 100% sure to catch his next show next week (True Story). OK, OK, I'll quit wandering away from the OR. I think I'm subconsciously squeamish about this. 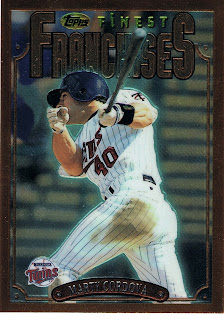 Whoa. Look at that! I think we just gave birth to a Chrome card!

It's as shiny as a freshly minted penny fresh from the bank. Fresher than pack fresh even. Things were so fresh in the mid-90s. Or were the late 80s fresh-time in America? Somebody ask Borat or somebody.

Oh, we will have to wait another year for Chrome cards though. At least we won't have to peel things off those ourselves, and piss off all those picky baseball card collectors that kinda wanted to buy our cards, if we hadn't been so stupid as to peel off the Topps Finest Protective Coating before they could enjoy reading that on their card forever and ever. But then, no one buys COMMONs anyway, everybody knows that.

Somewhere, I'm sure Marty Cordova's arms kind of itch right now. That protective coating things looks like hell, all covered with arm hair and dirt from his butt. That had to have hurt. You folks from North Dakota that mock all things Minnesota, quit hitting the refresh button on this page now. You'll screw up my carefully calculated page views from all those referrer spam sites in Russia.

Now, was that so hard? Isn't it great to finally see all of Marty Cordova's face looking down at a ground ball, rather than up at a majestic Home Run, without all those Topps instructions messing with the majesty?

What? My card is worth less now? Are you baseball card collectors crazy? Oh, wait, you don't have to answer that.

Oh, and P.S. — this is going to be a series. Pretty soon, I'm going shopping for an X-Acto knife. I'm not sure anyone will want to see just what is inside a Topps Embossed baseball card though. They feel suspiciously leathery on the outside. Wait a minute. MLB does go through a lot of baseball gloves every year.....

ACK! You, you can't di-sect a baseball card! Don't worry, MLBPA & MLB regulations both require advance warning before defaced baseball team logos can be shared publicly. You'll just have to watch those header pictures here carefully from now on. Some images might not be safe for overly grown-up baseball card collectors. You've been warned.
Posted by BaseSetCalling at 3:18 AM
Email ThisBlogThis!Share to TwitterShare to FacebookShare to Pinterest
Labels: 90s, Topps Finest, Topps Voodoo, You Can't Do That