FLCS Review #3 - Back to Eastern NC

Well, in baseball there is a superstition about changing things during a winning streak. Since I dedicated last night's FLCS #2 post to the Tigers winning of game 2 of their big series with the Indians this week, I figured I better not jinx them. So here we are with my third Friendly Local Card Shop review.

Two pieces of good news on that. I spent a good chunk of their epic 14 inning victory tonight scanning in four dozen Sea Turtles I predict you haven't seen yet. So I've got that going for me. And for the Tigers, I visited 3 more card shops after this one, so let's hope they can keep this winning steak alive. I'll do my part; the Tigers have that going for them. And if they win their first two games in New York this weekend and I run out of shops to write up, I guess I'll have to go visit a couple more shops to push them on towards Oakland A's territory. Darn, that will sure suck.

The shop we visit today has been blogged about before actually, as it is in the hometown of the Foul Bunt blog over there to your right somewhere, depending on how prolific my sidebar has been lately. That town would be Greenville, NC, where I occasionally get to spend some time every winter. A party-hearty, easy-to-get-into-university town, I have certainly enjoyed the place over the years. I just wish they had more of a grad student community instead of all those undergrads in all directions. It's an out of the way place that probably doesn't have many tourist type visitors unless your child is one of those undergrads running around. But hey, it's got a great baseball card blogger, so it's got that going for it.

Anyhow searching for this shop again bumped me into the over-permanence of the Internet, as I was first directed to it's former address I think. Someone needs to sweep the cobwebs out of this compendium of human information sometimes I think. 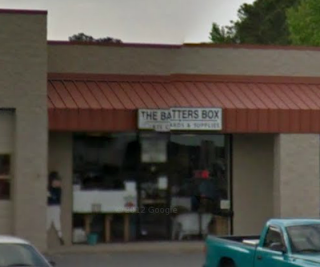 Owner - I done completely forgot. A very nice older gentleman; rare to meet a Red Sox fan in the south.

Card Inventory - Limited wax actually. A few open boxes across sets from the last few years. A good amount of hand collated sets for sale. But the real hook of the shop was a ginormous selection of singles. It was like being at a card show in there. Display cases of the good stuff, mid-level stuff organized in player collections, and to really make you dizzy, a huge $1 section. Cards for a buck, what the...

Space to rip your purchases - You would probably have to do this standing up at one of the display cases. The shop did have a small, kid height table next to the cash register which held a small wooden dice game of some sort. I believe pre-teen customers could play the game to win free cards, but that is a bit of a guess.

Baseball cards : Other cards - About 70:30. A small but broad NASCAR section; probably no hockey, at least not that I can recall.

21st Century Survival Strategy - An owner with the time to keep his shop open and simultaneously babysit his grandchildren probably helps.

Cool Customer Service - Picking up boxes for customers. The phone rang several times while I was there and each time the response was "Yep, I'll have one for you, don't worry." One customer had recently hit a hot-box of Heritage, with one purple refractor per pack.

Memorable Quote #1 - "Did you have a good time looking through all those cards?" Yep.

Memorable Quote #2 - "No, I don't think it looks that good for the Red Sox this year." I had selected one extra copy of the 2013 Topps Will Middlebrooks levitation card and that struck up a conversation. I predicted the management change in Boston would reveal solid work building the club's foundations through the farms...

Treasure Wistfully Not Obtained - Only one, as I tried not to peek in the display cases too much. That was a '75 Topps looking Magglio Ordonez. I think it came from the 2009 O-Pee-Chee set, which I am now collecting. I'll post on that someday, there isn't much rush to complete a four year old set and I just occasionally rip a pack of that....though I haven't pulled any of those '75 rip-offs yet, and I wants one.

Treasures Obtained - A new feature in these reviews, as I did pick up a few treasures. I had no particular shopping goal when I visited, which was so nice. I think this was the first time I purchased single baseball cards, rather than packs, in a very long time, as all other trips to an FLCS involved purchasing esoteric, non-retail packs, or purchasing retail packs at a hobby store to support the store.

First up was a card I had never seen: 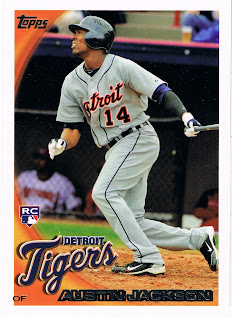 Which was because I just don't like that set, the 2010 Topps. I like that there is some orange on a Tigers card, you don't see that very often, and I like the script Tigers that matches the script of their road uniform there. But I never warmed up to that seemingly fish-eye lens effect, as if I was peeking through a keyhole at each card. And I know I never will warm up to the set, just a spare Tigers card here and there.

After digging that one out of the dollar bin, I then pulled the trigger on a card I've posted here before, and probably already own, though I don't have access to that collection as it is deep in a storage unit, and that is really gnawing at me this year. So, what the hey, I picked up an extra Ron Cey: 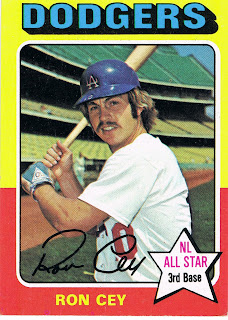 Probably just a PSA 3 or so, with 2 marginal corners and 65/35 left-right centering effort by Topps (my scanner punted the top-bottom, which Topps got just right). Who would want such junk? Me. All day, every day. It even came in it's own screw-down case, as such as all-time awesome baseball card should. I rationalized that my copy might be the mini version, and I need to finish out the regular cards which I have somewhere close to done, infinitely closer to done than the mini versions anyhow.

My final two treasures obtained were completely new to me; one will lead to a new collecting effort, and one will not. I can't locate the cards on my swamped card desk right now, most unfortunate.

I was intrigued to find this card:

This one should definitely be scanned in and I will do that one day as part of another post on a topic that has me pretty fired up right now. This is from some Upper Deck Heroes or some such subset name I forget right now, and is an original painted portrait of Van Gogh commissioned by UD, and painted in a Van Gogh style, replete with a Starry Night themed background. A neat little card worth a buck to me too. I suspect though, that this series led to a current Upper Deck card that I will have a lot to type about some other time.

I was also highly amused to find this card. Also a unique effort, and of course, if I go in a shop, I will discover anything and everything with this graphic design:

Perhaps you've noticed my affinity for those by now. Such a pity I can't scan the back for you right now. But I'd have to say Topps did it again for me, with this effort from the 2009 American Heroes Heritage or some such set name I forget right now. I believe there were ten of these 'Entertainer' cards, and I will be hunting for the rest. But I'm pretty sure you can't beat Athlete cards for entertainment.
Posted by BaseSetCalling at 1:35 AM
Email ThisBlogThis!Share to TwitterShare to FacebookShare to Pinterest
Labels: 1975, Austin Jackson, FLCS, Van Gogh