FLCS #4 - off to West Virginia

Well well I knew I would be typing this one up tonight with Max Scherzer on the mound tonight.

Don't mess with success, no matter how patched together the Tigers infield is right now. Just win baby.

So this is as good a reason as any to type up a card shop review that otherwise would have been a very long time coming after a great run of shops in North Carolina, because I just wouldn't have ever been motivated to delve into this story. Sometimes in the critical life, you have to tell it like it is. 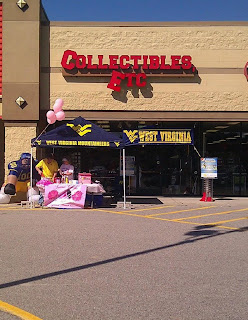 So.....why did a baseball card nut end up here? Great question. I just typed the magic words "baseball cards" into a map app on my phone, and this is where it sent me. It is actually fairly difficult to find friendly local card shops as you wander around these days. Easily more than half of them that internet search 'wizards' will point you towards no longer actually exist. Even the store locator on Topps.com has this problem in spades, but then I'm sure you're used to Topps not being all that tight on the details any more. I have seen people asking fellow collectors online where a good shop can be found, and that is actually a smarter way to go even amidst the hands-free brain-free era of just follow-the-GPS wherever it tells you to go. Computers can't ever make mistakes, right?

And actually my visit in early 2013 was not even my first visit to this store, as I had found myself working near Charleston, WV on Opening Day 2012. And me without a Tigers ball cap to get all available onlookers all fired up for the team that had lost to the Rangers in the 2011 ALCS, but just had to be on their way to the World Series the next eternally hopeful spring. So I probably used my phone to find a quick source of some appropriate headwear that day to cover my lapse of fandom.

Then Opening Day 2013 found me right back in the same general area, in fact with a lunch meeting with a client just a mile away. That pretty much cleared my schedule for the day, save for a drive on up into south-east Ohio for my next job.....leaving time to go baseball card shopping, of course!

So the magic words were spoken into the magical slab of technology that is rarely more than five feet away from me these days, and it quickly reminded me of my clutch haberdashery find exactly a year previous. And I had this tiny memory of there likely being some baseball cards contained therein.

Space to rip your purchases - no, not really. I mean I guess you could stand there at the register and do that, but aren't there like hourly hotels or somewhere you could use instead? I mean, your car is just right outside out there in the big empty parking lot around this big nearly empty strip mall.

Baseball Cards : Other Products - 1:99. Collectibles Etc. is not a baseball card store. It is a "Memorabilia" store. You know, collectibles. AKA Tchotchkes. Trash cans with team logos on them, ash trays with team logos on them, swizzle sticks with team logos on them, Parking For Mountaineer Fans Only signs, you name it. And of course lots of Jerseys and amazingly expensive framed prints of famous athletes that seem to be a staple of such places. All those things a sports nut can use to show the world that they love a sports team, even though everyone who knows the purchasers of these items already learned that a long time ago. But, you know, in case anyone forgot.

And ironically, as baseball cards become ever more of an ego stroking product (I've got the 1/1, you don't!) and just another piece of memorabilia, they can't even survive amongst all that memorabilia very well, as this shop ably demonstrated to me.

21st Century Survival Strategy - A common one for stores such as this is unfortunately to dump their previous inventory line of baseball cards. Baseball cards instantly depreciate something fierce as soon as you open the pack, but the same is true for boxes as soon as the case is opened if they don't sell right away, like within just a few weeks of release date. So stores have a hard time holding new cards as inventory when their value generally only goes down.

But I can't blame Collectibles, Etc., for this harsh reality. They seemed to be doing just fine with their key lure - autograph signing sessions with West Virginia University athletes. West Virginia is of course a state without an MLB team, or an NFL team, or an NBA tea, or an NHL team, so WVU is followed with a great deal of fervor of course. The whole state sometimes reminds me of a surreal drive across Oklahoma one fine fall Saturday a few years back, when that whole state looked so deserted I thought I was slipping into an episode of the Twilight Zone - the Sooners were playing.

Cool Customer Service - The line for the autograph forms to the right I guess.

Memorable Quote #1 - "Yeah, we have been selling lots of packs of Heritage, but only because everyone just wants to hit one of those Senators cards in there this year because they sell so high on eBay."

Memorable Quote #2 - "No, I don't know who the Charleston minor league team is a major league affiliate for these days."

Treasure Wistfully Not Obtained - None. Perhaps some of the Heritage or Series 1 I picked up filled some holes in whatever state my collections of those were in, who knows? I did not pull a Bryce Harper Washington Senators card, that's for sure. I think the Trailer Park Boys had already cleaned them all out.

Sometimes, the smell of popcorn and that giddy world of cards a little further down past all those gaming cards on the prime corner shelf at Target is just a gosh-darn wonderful thing to see.

Posted by BaseSetCalling at 3:31 AM
Email ThisBlogThis!Share to TwitterShare to FacebookShare to Pinterest
Labels: FLCS