It was a very long week in a baseball-less black hole. About an hour in any direction from any store that sold baseball cards. Although my phone worked as a phone, data service in total boondocks is mind-blowingly amazing in some places, and non-existent in others, such as where I kept ending up.

Some teams still have games on such stations of course, but not the Tigers. I will never ever forget being in northern Michigan in October, 2006, and having to listen to a Tigers playoff game on a clear-as-day station from New York. With the Yankees announcers. Because where I was sitting in Michigan, none of the Tigers radio network could be pulled in.

But all great jobs come to an end, and along the way home I was ever so happy to find a Wal•Mart. I'll ponder the place tomorrow. For now, let's see what I found inside: 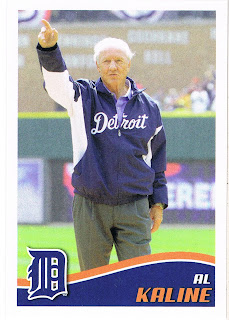 Yep, a sticker I have been chasing. To ease back into the 21st Century and some cheap baseball picture products I went with a few packs of 2013 Topps MLB Stickers. I had a hunch buying them in a different locale might shake up the Topps sorting machine enough to get me several I need, and my managerial instincts were correct. Kaline at last. Still just a few Tigers to go. And logo stickers. I forget just exactly which right now. At least I already have Scherzer, though I hope next year Topps sees fit to celebrate like I do when pitchers get a W _and_ a GWRBI.

A surprising sticker though. Almost every team in the set has a fan-beloved veteran in their short checklist. But all of them I have seen so far included an image from their playing days. Instead we see Kaline acknowledging some sort of tribute right there at Comerica Park, with his old TV broadcast partner's name there next to his left ear. But somehow appropriate for a fan-beloved veteran still very much involved in helping his baseball team win games every day.

And as usual, even in a pack of 16¢ stickers, Topps hooks me up with baseball player pictures I haven't seen before, amidst all the many stickers I already have, and the many I have already seen on their other products. 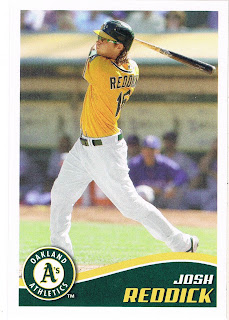 Why here is a skinny Oakland "A" that somehow seems familiar. Skinny like Billy Beane. Long blonde hair like Brad Pitt. I'm so confused now. With a frame like that, how in the heck did Reddick hit those home runs last year, and for that one week this year? Beware the Topps Voodoo, Josh. Leave it to Topps to reveal the real deal on those baseball players. Topps, always bringing me closer to the game and its leading players, just like they pledged to me on the back of that Fernando Rodney relic they CONGRATULATED me on receiving twice last year.

It seemed to be a bit of an Oakland A hot box of stickers with Reggie Jackson about to swat one all the way, way up there to the southern shore of Lake Superior, a baseball purgatory if there ever was one; yet every little town still with a Little League diamond. One of the stickers had more official MLB news from Topps, as it announced that a Little Leaguer is all grown-up now: 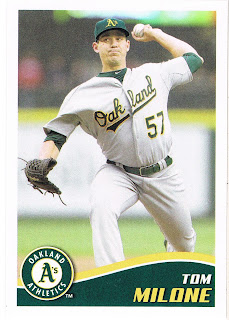 Another sticker shows us what happens in a perfect world after Superman slides into 3rd base: 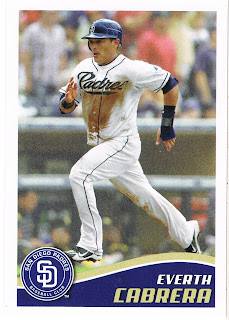 He simply trots home when the next batter smacks a home run and all the fans ignore him while they stand up to watch the ball fly. A perfect world being the world of baseball stickers for kids that don't need to have anything at all on the back, such as stats for a season with 50 less games played than the year before. But I am a sucker for baseball cards, err, pictures including a standing crowd.

And even after perusing a couple-three thousand baseball picture cards the last couple-three years, Topps also hooked me up with a baseball image archetype I don't think I have seen: 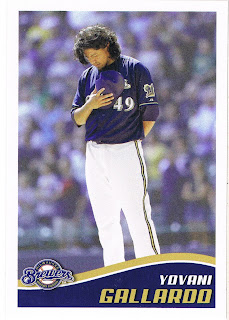 That's binder material there. Though of course, that would be stuck on the outside of the binder. If only we could have got a bit of red in the image so we could have a perfect touch of the irony of a foreign-born player so perfectly honoring our own country. I feel bad for Topps sometimes having to try and make good looking baseball image products with the materials the Brewers give them to work with. I predict many more throwback uni cards in the Brewer's roster's future. They did hook up Gallardo with a great card in Series One though, totally worth the 14 ~ 20some¢ it would cost you to acquire, if you don't count the costs of all those doubles.

Now maybe those of you with a couple-three score thousand baseball cards have seen a great National Anthem deal like that one before. Either way, we all like classic baseball images, like this one: 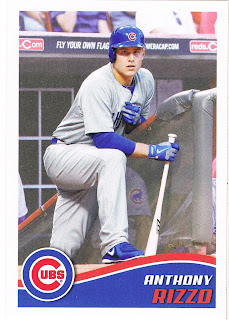 Red, White, Blue. Can't be beat. Fly your own flag, Anthony. Roll that logo back up the hill, again. Playing in Chicago must surely be one of the more Sisyphean tasks in the Universe. Everything I need to know about baseball, I learn from Topps.
Posted by BaseSetCalling at 11:48 PM
Email ThisBlogThis!Share to TwitterShare to FacebookShare to Pinterest
Labels: Al Kaline, Baseball on the Radio, Topps Stickers, Topps Voodoo