There used to be lots and lots of baseball cards sporting photos obviously taken during Spring Training.

And there still are of course, though they appear in the Archives and Heritage sets these days. That's partly by design I'm sure, to capture the feel of the vintage sets in those two new sets. I'm pretty sure most of the images in those two sets in 2014 have already been captured in Florida and Arizona this past spring. Hopefully the photog Topps uses for them will vary the direction he points his camera some, because the spring training cards are becoming soooo repetitive. Topps doesn't care, because Topps doesn't have to. We buy the cards like good little customers no matter what Topps does.

I would like to see the set I collect the most closely, the Topps set or the flagship if you must, include some Spring Training images. It would help break up that samey-same feeling on so many cards this year, something I will return to on some other angles another night.

I was pleasantly surprised to discover one Spring Training image in Series 2 this year: 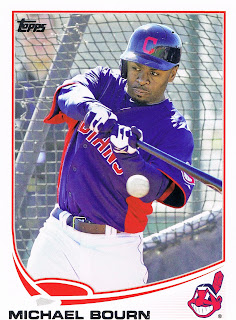 Of course since Bourn signed with the Indians in February as a free agent, a collector's first thought on a new Topps card of a player on a new team is of course: Photoshop!

But I really don't think so here. This is a batting cage shot - an occasional baseball card image to be sure, but not seen on regular, all-action Topps cards in many a year. The card also has great light on it; that low winter sun makes for a different character to outdoor light in March. I work outdoors year round and can definitely see this in photographs. And the light is consistent on every part of the card; this isn't a Franken-image of a day backdrop with a night photo of a player, which has happened.

Another reason is a good half-dozen or more of the following type of card in Series 2. When I bindered them a while back, I took note of several of these for a post, but only need to show you one: 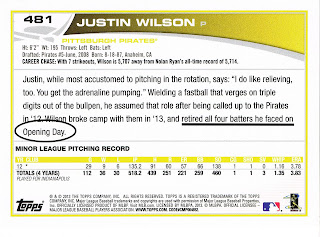 The author of the card backs in Series 2 semi-regularly mentions Spring Training 2013 stats, a player making the Opening Day roster, or, as here, even reports a bit of game-day action from Opening Day. Yes, Opening Day 2013.

Was that so hard Topps? Why can't we have some more of this? I know why, I think. Because Topps puts their production resources (staff hours, photo budget) into other cards. You know which ones. Why work very hard on those lowly base cards that just those "low end" collectors purchase? How I loathe that phrase. I know, the hobby has moved on to new and 'better' things at the "high end." I'm just a disgruntled baseball card veteran being pushed out of The Show by younger talent.

But I can hope to someday see a new Topps set of baseball picture cards made without cutting corners, as was done on this card: 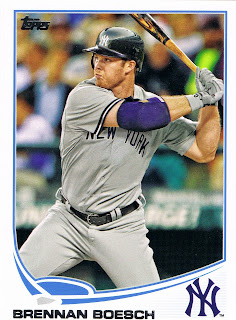 Did the Yankees' uniform manufacturer forget to put the striping on Brennan's left sleeve? I seriously doubt it. The Topps Photoshop wizard was asleep at the big hi-res computer screen again. I wish I could remember which blogger pointed out a much greater classic, new Toronto Blue Jay Melky Cabrera's orange batting gloves. I liked that one so much I decided to use the Factory Set Orange parallel for Melky's card in my parallel project to really put attention on those gloves. I'm still looking for the card on the off chance a reader is picking up a '13 Factory Set.

Boesch was released by the Tigers in March and signed fairly quickly with the Yankees in their desperate scramble to replace so many injured veterans at once. Sure makes you wonder who has been running their minor league system the last few years. I liked Boesch when he was with the Tigers; I saw a slow motion view of his swing one time that was a thing of wonder. When he completed the swing and the tension flowed out of his grip on the bat, it was like seeing a tightly wound spring uncoil. He has tremendous power but of course has to be able to apply that power to a baseball zooming towards him, which has been a mighty struggle for him so far in his career. He might return from a mostly AAA-played, injury stricken 2013 and blossom into a power hitting outfielder perfect for Yankee stadium in 2014. I'm sure the Yankees hope that and will give him a shot, but the odds of it all working out are getting a little long I think.

Anyhow, Boesch climbed on-board the Yankee bus on March 15, 2013. It says so right on the back of the card. Plenty of time for Topps to get a nicely lit shot of Boesch in a Spring Training game. Heck they could probably just buy one from a press agency (I really don't know or care if they hire photographers these days but suspect they usually purchase from agencies).

Instead, we get a botched Photoshop effort. I could say "us low end collectors get a...", but one ironic thing about the Photoshop cards is there are plenty of them in other sets such as the in the world of prospecting, where draft picks are mocked up into a big league uniform. All kinds of goofy montage-like photos (storm clouds? really Topps?) are created for purchasers of "high end" cards who barely care what picture (goodbye floating heads, hello floating torso after floating torso) is on a card, as long as the # and the d in the #/d stroke their ego in that just exactly perfect spot. Oh yeah, good, uhhh-huhhh, oh a little more to the left, oh right there, YES! That relic is so HOT! Ahhhh, check out the curl on that auto! Anyone got a smoke?

I'm not totally anti-Photoshop either. It's not that big a deal, and frequently a card purchaser can not tell. I have even seen cards called out as being Photoshopped when I feel with 99% certainty that they weren't.

It's more of an affront to the intellect. You know when the player was traded, released, etc., and whether there was any chance at all that Topps could have a real photo of the new uniform.

Photoshop cards could even possibly improve from a technological stand-point, but I doubt it. Perhaps the Topps employees manipulating the images will tighten up some and achieve a higher batting average than they did with Melky and Brennan here in this Series.

Or Topps could put resources into being a realistic, up-to-date chronicler of Major League Baseball, as much as they possibly can. But, they are Topps. They have that monopoly. They don't care, because...
Posted by BaseSetCalling at 12:27 AM
Email ThisBlogThis!Share to TwitterShare to FacebookShare to Pinterest
Labels: 13 Series 2, Yeah I Read The Backs