I knew this would happen eventually. I carefully saved all these little packs from my Toys-R-Me Opening Day blister packs, like this one: 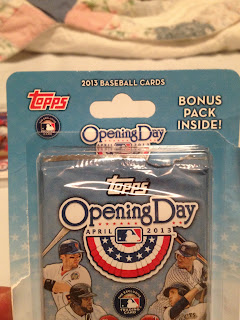 These are 3 pack blister packs. Not 2 plus a bonus, cheezy Topps blaster ad-blasting style.

Nor are they 4 pack packs with a price seemingly for 3 packs and a 4th pack, Bonus!

No, the Bonus Pack Inside! is just a little pack of 4 cards from Series One. Just regular cards, no inserts or parallels, you know, the average worthless junk from Topps that only children in awe of a whole universe of toys in a toy store would want. Typing that sentence made me realize I should probably report things accurately. What if I was wrong about that and there was a Platinum 1/1 in there? It would be a crime against baseball cards if a 1/1 from a strangely packaged pack of baseball card packs went in the trash wouldn't it? How could Topps not tell me there might be a 1/1 in there? What if it was a Puig, for Mickey Mantle's rookie card's sake? Oh, wait, Puig wasn't in Series One. A forever lost 1/1! A set that will never be completed! Oh the humanity.

In other words, I finally ripped all the packs, just to be sure. Ripping packs packed in clear plastic where you already know 50% of the contents isn't very exciting, which is a part of the reason it took me some four months to rip them. No 1/1 scores to report, sorry. Actually I was a little curious to see if a Short Print could sneak into one. That woulda been hella cool.

Instead the Bonus Packs Inside! had some pretty odd collation. 9 out of 11 of them had official RC Rookie Cards in them, most of them with 2 out of the 4 cards. One instead was a Topps All-Star Rookie Cup hot pack featuring the Cup on 50% of the cards in it. Geoffrey moves in mysterious ways I guess. Maybe he is trying my favorite description of Topps' basic marketing strategy these days - First Hit's Free, Kids - and the big giraffe has to hook those kids on those valuable rookie cards somehow. But then kids don't buy Bowman Draft Fusion Chrome or whatever they call that set with all the little kids in it. Those are for grown-up investors, so Geoffrey generally takes a pass on dealing those.

The Bonus Packs Inside! were not why I actually went to visit Geoffrey to get my toy-like Opening Day cards. Don't forget Opening Day is in April, now! I do like the Opening Day set though this was the first year I collected it. Someday I'll escape from my technicolor parallel daze and finish out typing up the roughly 1/3 of each insert set I need from it, and the roughly 1/3 of each insert set I have to trade from it. Those darn parallels sure got a hold of me this year, and Opening Day has sure helped the Parallel Project as almost every page of Series 1 and Series 2 in the binder includes a player that was part of Opening Day and thus part of the really nice "Blue Foil" /2013 parallels in it. A lot easier to put together with those than 1 pink, 1 camo, and 1 black on every page as I originally dreamed it up. Now I only need 2 of those. Or even just 1 when I can eventually get a hold of some Factory Set Orange. The Update set might even hook me up with another color I forget. I decided the other day to never, ever, look at a "sell sheet" ever again. I'm already bummed about 2014 baseball cards (not Heritage though), and the NFL didn't even start yet.

And the technicolors derailed that paragraph there a little, sorry, though I'm pretty good at that on my own. I purchased my first Opening Day 2013 Toys-R-Us blister pack looking for a card printed on the cardboard packaging. Like the Justin Verlander mini-set last year, about which I still don't know if I have complete at 3 cards.

Instead I found that the Bonus Pack Inside! (hold your horses now children, I'll show you the Bonus Pack when we get outside the store in just a minute) wasn't the only Bonus inside, though Topps did not print a unique card on all that light-blue cardboard field of stars. They just let that possible sweet card border go to waste, actually. And instead, without even blabbing it to the world on the package like one would expect of both Topps and Geoffrey, they slipped in a single parallel per blister pack. Naturally, it was a Toys-R-Us purple. Among the limited amounts of these I have, I did pull this 1 not of 1: 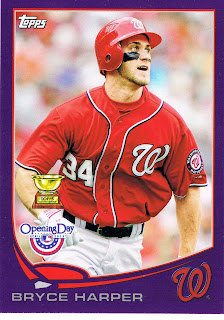 I'm thinking that one will look sharp on the Trade Bait page I haven't built yet. Harper supercollectors can't build the Harper Super Rainbow without the Opening Day Purple very well can they? Topps Super Rainbow chasers this year need 38 cards at last count if their object of rainbow affection (probably sounds a little strange to those strange people outside The Hobby) appears in Opening Day and one of the AL/NL All-Star retail sets. About 15 of those would be 1/1 cards. They might not want to chase those Bonus Packs Inside! too much. Best of luck finding 15 1/1 cards when those dastardly people that don't open their boxes for 38 years stick one on a shelf somewhere. I hope to meet one of those people holding some 1975 wax some day, personally.

I'm trying to limit the Opening Day cards in the Parallel Project to the Blue Foil only unless I'm in a pinch, and though the first page of the Series 1 binder is a little tough to fill with some serious Star Power in cards 1-10, I did pull a gold Bryce Harper to use, so I can trade away his Opening Day Purple. I'm pretty sure I'll be able to track down a Ryan Braun 1/1 of some odd sort to fill the last slot on that page whenever I need to though.

Now when I found my first little Bonus Pack Inside!, (as I opened this post quite awhile ago now) I knew a certain event would happen eventually with these: 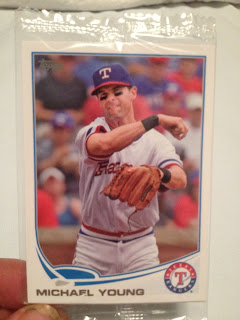 Nice Pull! Michael Young in a vintage uni, complete with Eye Black. I think he got a little crazy with the Eye Black on his wrists though. How many genuine Eye Black cards this year? Oh dear, looks like I need another special binder page to keep up with these important details. Hey, didn't I just see some Eye Black on a card somewhere? Oh, yeah, on that purple card up there. Bryce is a helluva ball-player at only 20 years old, but I think he could still use a few Eye Black lessons from the veteran Michael. Children love Eye Black cards, I know that from all those exciting Panini products I see looking lonely on the shelves everywhere I buy Topps cards.

That was the Bonus Pack Inside!? That's it? Wasn't there a magic Bonus event inside? You promised! Oh dear, Topps and promises, there's a difficult toppic. No, the anticipated event appeared in one of the packs inside the blister: 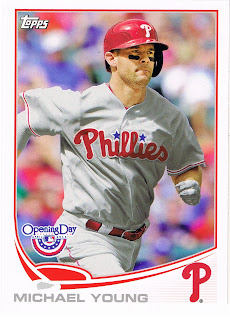 WAIT a minute! The clear-plastic-wrapped Bonus Pack Inside! already told me Michael Young is safely enjoying a solid .301 hitting career all with the Texas Rangers. A clean-cut American ball-player, generally popular I believe, has to be included in the Opening Day set. Now in the space of 2 packs of baseball cards he plays for the Phillies? Daddy, Daddy, I think I pulled an error card! Can you ask those nice Beckett people about this one for me?

Now I am all grown-up now (Really. Yes, really! I swear!), and I know the deal on this card. It is cool that Michael keeps rocking that Eye Black no matter what team he plays for. Not sure how he will do moving back to the infield every day for Philadelphia now that he plays with a claw for a left hand though, looks like that might be a little difficult.

That card is of course a Photoshop card. And I like it. Yesterday I was bitching at Topps for making a Photoshop card, now I am liking them? What gives? Opening Day comes out in late March of course, just-in-time-parts-delivery-guaranteed for Opening Day, which is in April, you can check your pack to be sure. Series One came out in late January, two months previous, and in between there are two whole months of baseball transactions. And more to the point, there are two months of extra production time with the cards scattered all over the Topps factory floor on 220 galleys while the Topps elves tweak them to perfection, right?

And during that time those MLB General Managers might trade a baseball player, or those rarely popular Agents might cut a new deal for their very-not-Free players with a new team. Then what are the Topps elves to do? If they don't fix up a card, a blogger with a whole 30 some readers every day gets real mad at them!

More importantly, kids don't like baseball cards of a player's previous team. They might take out a pen and change the team on the front of the card, O-Pee-Chee style, so their baseball cards are up-to-date and correct for Opening Day.

I did that to my cards when I was young. Then I could file them in the proper team slot in my card case and all was well again. Someday I will be reunited with my 1975 cards and will get a good look at the damage to my Bert Blyleven Dug-Out / Meathook Card that I can still picture pretty well, now that the nightmares have subsided, except for whatever team it was that I wrote on to it over the word TWINS.

Now where is my 1975 Topps font right when I need it? Wouldn't that be handy for blogging? Topps fonts. Yeah, hella cool. Someone needs to get on that and add it to Blogger. Pay attention up there, Google.

So I think it is cool that Topps does this for the Opening Day cards. I think there were a bit less than ten of them this year. I'll link back to this post in the playoffs when I am all giddy playing with new base cards from the Update set. It will be interesting to see if Topps makes yet another Michael Young, Philadelphia Phillies Third Baseman card with a real picture of him in a Phillies uniform, considering how much time they would have to get things right for me....

...if he still plays for the Phillies by then. He cleared waivers the other day. It's more than difficult enough to collect all of the Sea Turtles this year without post-Trade Deadline super super short prints like we had last year.

Those elves had best be working late this summer, tweaking those 330 Update galleys with images fresh from the world wide web of everything ever, right till the Big Box truck backs up to the door for the first pick-up. If they don't, I'm sure I'll get mad at them again.
Posted by BaseSetCalling at 12:03 AM
Email ThisBlogThis!Share to TwitterShare to FacebookShare to Pinterest
Labels: 13 Opening Day, 13 Update, Eye Black, Geoffrey