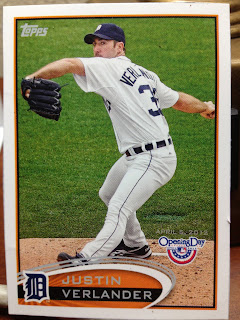 No, no team would cut such a player. But of course, the Houston Astros could hardly take the field with just one player, could they? I'll get back to that.

Yup, I found another 2012 Opening Day Justin Verlander photo variation, though of course I have to cut it into standard baseball card size myself. That makes 3 now. And now it is the perfect day to post this.

A few days ago I found a kinda out-of-the-way Toys R Us, maybe a new one. I had been all through that town all winter long, but I had used some random internet yellow pages type search result to show me where Geoffrey had built his stores, rather than the official Geoffrey.com site. Turns out the site I clicked on was like a couple years old, and it never listed the one that was closest to me. But it was the top search result, and it worked better (i.e. loaded faster) than the tell us your-zip-code official site, which then loads a map you can't scroll with on mobile.

I have had this same problem with searching for Friendly Local Card Shops, going to several locations that were no longer the correct address. Just because information is on the Internet, does it have to stay there forever? Google, you fail sometimes. I know you are listening ... get this stuff together!

So I finally go to the nearest Toys R Us all along, in hopes of finding more of these blister packs of 2012 Opening Day, plus some hopes to get some more 2013 Opening Day too. I found one 3-pack pack of '12, and that was it. This store moves the baseball cards so slowly, they still had blister packs of 2011 Series One (no bonuses at all in that one, I pack-searched the blister pack very carefully). They even had Complete Factory Sets of 2011 for only $79.95. Those came with a special refractor card of Geoffrey himself! Sadly, I didn't get to read the back, as the last thing I would ever buy is a Complete Set over-priced by about $30. Those Geoffrey refractors sure tore up the hobby now didn't they?

But overall I can't complain. I did get what I hoped to get. Another Verlander in the 2012 style. I hope to figure out just how many of these there are. Kind of a cool retail only set, albeit of only one player, but quite unique these days, which no longer features Kelloggs cards, or Burger Kings, or K-Marts.

And of course today had the big news of Justin signing a 5 year contract extension with the Tigers. Which was immediately buried in the national media by Buster Posey's extension. Hitters will always generate more press than pitchers.

I found out in a neat way - Tigers GM Dave Dombrowski appeared in the broadcast booth at the beginning of the Tigers next-to-last Spring Training game. Kind of another Spring Treat. Much like the other day, I had forgotten that Dombrowski likes to chat on the air with Dan and Jim once in a while.

Overall though, the news today kind-of gives me the blahs. Perhaps it was a blessing that the Posey news overshadowed a new high for paying a pitcher. Back when Felix Hernandez signed a few weeks ago, I looked at his pay in an odd way, and I looked into this again today.

Verlander will make about $28 million a year when the extension kicks in. He will likely be averaging 3,500 pitches a season, as he has been lately. That's $8,000 per pitch. Eight Thousand Dollars. For each pitch.

I can't even wrap my mind around that. Sometimes, I think professional sports has just gone too far. This is one of those times.

On top of that, I'm losing my enthusiasm for the Tigers somewhat, though this is something that has been growing far before today. Their owner, Mike Illitch, wants to win a World Series. He played in the minor leagues and has overall been an excellent owner and a decent citizen of Detroit.

But much like the Red Wings before the salary cap, he is attempting to just purchase his way to the top. I think at one point the Wings had a #1 line that was composed of purely All-Stars, thanks to Illitch's checkbook.

Now, sure, Verlander is a product of the Tigers organization, so I can't quite say his wins are purchased victories. But if he had come up with a half-dozen or so well-known "small market" teams, he would obviously have never stayed with one. He is that good after all.

The greatest thing to happen to the Red Wings was the Salary Cap, in my opinion. They just kept on winning and going to the playoffs. This illustrated the skill of the Front Office more than anything.

Sure, baseball as recently as last season is littered with examples of high payroll teams failing miserably. The Dodgers seem to be this year's test of the idea of purchasing wins, moreso than the Tigers. And we've all seen Moneyball. Yet every low-payroll team that makes the playoffs just seems to be the exception that proves the rule. The Twins made it to a lot of playoff games. But did they make it to the Series?

Somewhere else today I read that Alex Rodriguez alone will make more than the entire Houston Astros team this year. I know who I will be rooting for on Sunday night. Winter is coming!

And really, this whole subject is just sad, and talked out, and nothing ever changes, except salaries continue to go up, up, up, as do ticket prices, and cable TV packages. So far, audio-only is still pretty cheap, but it went up $5 this year for using my mobile app. But it is just sucking the life out my enjoyment of baseball cards today. I feel like my Home Team is, well ... I'll still be rooting for them.

But I feel like I am rooting for the Yankees.

Posted by BaseSetCalling at 11:58 PM
Email ThisBlogThis!Share to TwitterShare to FacebookShare to Pinterest
Labels: 2012, Dan and Jim, Geoffrey