A great mail day evening. A binder page is complete! 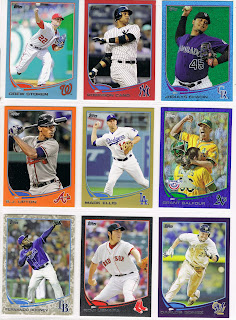 You can probably guess which was the hardest card on that page, which arrived today from blog reader Jimmy, who is building complete sets of the red-border cards from Target. I tend to select cards of perennial All-Stars from the East Coast, such as Cano, on the cheapest parallels possible to try and stay at least a little fiscally prudent in this completely imprudent project. I won't use a blue turtle on an emerald or a Wal•Mart blue-border, so that left a Bullseye card for Cano there.

It was also a challenging page due to an early acquisition of Koji Uehara on the hobby-only black border edition, which probably came in a lot of several such cards, well before the postseason. Uehara had such a stealth season until the playoffs, with some incredible stats this year. But then the pre-2013 #s on the back of his card look darn good too. There were probably 3 American League GMs kicking themselves during the games in October this year.

So that was a pretty nice pick-up for the project by this GM typing at you now. But it created a problem...5 more blue Sea Turtles to find pigment for. With Leprechaun and Wally-World-cards ruled out, that meant finding a 3rd low # parallel after the Uehara card, as only 3 cheap parallels were left to use for the blue teams - one from Geoffrey the Giraffe (Toys-R-Me purple), the pretty young things at Target, and a Topps Gold.

That's where the first of what I call the Hunter Safety cards was a handy find - the B.J. Upton /230 Factory Set Orange parallel. Those look sharp if you like bright things....if you are one of those boring people that think the world should be pastel everywhere, this isn't the project for you.

So finally trading with a second person building a parallel set was a big help. A number of Target Reds and a few emeralds from Jimmy came in for some of my Targets and 2012 Gold Foils. Jimmy also sent along enough Octavio Dotel and Miguel Cabrera base cards for me to finally start up some Player Collection lists to avoid duplicates. Thanks, Jimmy!

The haul of parallels also let me improve a page I had initially thought to be finished: 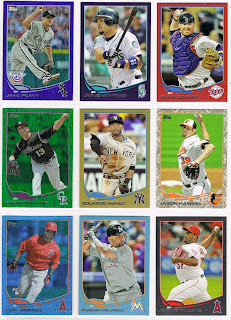 This involved a 3 team swap, something always exciting in Major League Baseball. It seems Drew Pomeranz really had a tough 2013 going on his baseball card. Photo/scanning/printing errors of some type on Topps' part just simply gave him an unattractive card; even a parallel couldn't save it.

But once I initially finished the page, I realized a foil parallel would cover for Topps. So with Jimmie's help Target Red was traded to Ryan Doumit, who then shipped off his camouflaged duds to Jason Hamel, who was glad to escape from the obscured world of Emerald Foil and let his vivid green background shine once again. This also got a blogger's card back on to the page as camo-Hamel had originally arrived from Ryan @ "O" No!!! Another Orioles Blog.

Confused yet? Don't worry, the Hot Stove Parallel League is just getting warmed up.
Posted by BaseSetCalling at 10:10 PM
Email ThisBlogThis!Share to TwitterShare to FacebookShare to Pinterest
Labels: Beguiling Binder Page, Parallel Problem