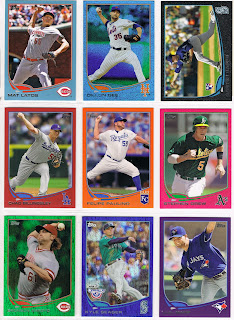 This is another page with a blogger credit attached to it as I believe the Target Red Billingsley arrived in a trade from the Night Owl, who was kind enough to read all the way through my lists of parallel needs.

This is a nicely bright page thanks to the keystone card right there in the center of the page, the Hunter Safety Paulino. It also feels like a bright page to me as there is no Gold card on it; I really like those, but though they are totally classy, they also look a little staid and dark when hanging out next to foil, sparkles, and wonderfully warring color combos like the pink/green Drew card.

Normally I would not construct a page in S1/S2 with three #/d cards, as generally only two are needed when I can use an Opening Day Blue Foil. But I was picking up a few other Factory Set Orange cards on ebay for 50 cents each; if I added in the Paulino shipping on each card got technically cheaper. Which made finishing the page just as easy with Orange as Gold.

Without all the pretty colors, this page is one of the most blah in the entire Series - no batters! 7 pitchers, a base runner, and a fielder. 9 baseball players all photographed in live game action, but only 2.5 baseball player feet. At least we get to see some spikes on the Seager card. But if it weren't for the Capps horizontal card I would definitely skip over this page very quickly in a binder full of the regular white border cards.

I have come to realize that even though the standard Topps and Bowman sets are the only product Topps produces with any real baseball game background (and not considering Heritage/Archives, which deliberately mimic other sets' photo composition styles), Topps zooms/crops in on the players for a reason. I think it it could be because Topps thinks this is what collectors want. With the success of "inserts" and "shiny" and the endless combinations of those concepts with autographs and relics, all of which are baseball cards completely devoid of baseball game context, it does appear that is true. In the ego-driven hobby of today, where collecting is done so often for the rather sad "joy" of simple possession (in my opinion), rather than for the enjoyment of the aesthetic qualities of the collected object, this is the natural end result. Prospectors don't care in the slightest that recent draft picks are photo-shopped into major league uniforms and set amidst any goofy background Topps happens to design for them; on high-end cards, simple floating heads are more than sufficient when the real draw is the other other objects on the card. In short, the photograph is nearly an irrelevant portion of the product for many of the purchasers. So why not zoom a live action photo all the way in? All that matters is the status endowing color of the shiny border, and what number follows the slash on the /# part of the card. The lower the #, the greater the "joy;" though all this psycho-babble does short-change the idea of enjoying the aesthetics of shiny inserts, which I do enjoy at times.

The other day I was working out a trade to finish the small set of Update Chrome. My trading partner said the only thing he could offer me was the last MB card I needed, the Puig Rookie Debut, and one Camo parallel from Update, because after that he "didn't have any other numbered cards left." Base cards don't count....who even wants to own them? But there I go again...

So anyhow, this could be the most pitching on any binder page; I have been meaning to look into that but I think I will just do that as the pages slowly complete, which will probably take long into 2014 as I move acquisitions for this from ebay over to COMC while I am away from home. I look forward to starting out on that site.

This page came together unexpectedly tonight; no cards for it arrived in the mail today. It is one of the more satisfying pages yet as it is my first 100% complete Series One page. I didn't dream up this project until a bit after Series 2 was released, and Series 1 lags far behind. The last card to actually put in a slot was the purple J.A. Happ, even though the last card acquired was the Paulino. The Commissioner saw the empty slot and thought, hmmm, I seem to recall a purple Happ around here somewhere....

Syncing card stacks of 7 main parallels colors with free agent card acquisitions on the 'bay and what can be found on trading blocks is a complicated affair. No wonder this page ended up fielding 7 pitchers and no batters. At least I won't have to keep these 9 players' laundry straight any more.
Posted by BaseSetCalling at 1:12 AM
Email ThisBlogThis!Share to TwitterShare to FacebookShare to Pinterest
Labels: Beguiling Binder Page