Only one sleeve - What's Up With That?

Well I'll try hard to stick to the visuals - baseball cards, duhh - on tonight's post so that 3rd turkey sandwich you just snagged from the kitchen won't lead you to fall asleep reading my blog. I'll let you wander off to consider some checklist somewhere for that. Maybe some Japanese cards...

And I'll be showing you cards from Series 1, which you might not have seen for a good 9 months or so now, so that should keep you intrigued. And these happen to be the cards I am trying to put away, finally, for the season.

So let's see a card already! 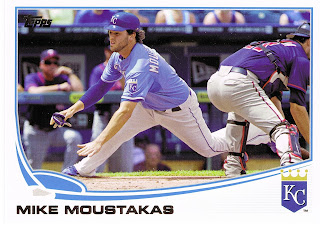 I love how on this card it looks as if Moose is trying to catch the Turtle. If this card weren't so blue, blue, blue everywhere I would probably have it on a year-end list of some sort. But I promised cards, cards, cards... 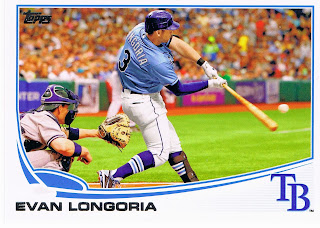 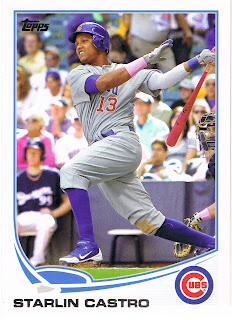 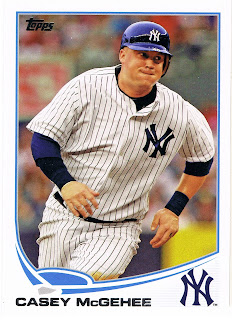 Baseball Reference lists a Final Game, so you might think this is a Sunset Card. Except he hit .292 in Japan this year, with 28 Home Runs, and his team won the Japan Series...so now he gets Sega Card Gen cards, a terrible discovery to discover. Topps makes cards of American major leaguers in a foreign country and uses all unique images on them! No repeat photos for their discerning Japanese arcade game customers, no sir. Don't blame me for what happens when you finally see 'em. Here, I'll give you an excuse: An MLB themed bar in Japan even has waitresses in go-go boots parade the cards around. I Kid You Not. It's not my fault.

OK, Ok, I'm sure you expect to see some proof of that bold claim. Here yas go: 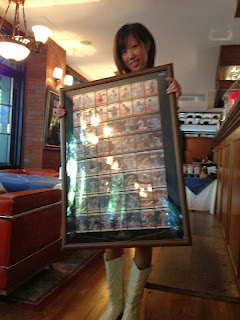 Well, if you slept though that part, there's just no helping you. Buy a set of these wonderful baseball cards? Sure thing, uhh, maam, I was just thinking that myself. Anything you want...

Baseball cards just can't get much more exciting than that ... can they? We'll see.

But now that I've beat back the extra turkey sandwich droopy eyelids, let's get back to some boring old baseball cards. I'd rather look at go-go boots, myself: 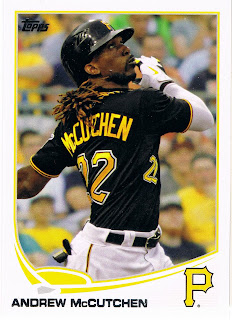 Now this is one of my cards-of-the-year. Torso shots aren't all terrible at all, I just burn out on the quantity of them. I really, really want the black border version of this card, though not nearly as much as I want to hang out with go-go boot wearing baseball card fans. I might have to settle for the /100 Chrome black-border though, rather than the /62 Hobby-Only version all these hobbyists have parked in their collections by now. If only Goldschmidt had hit a half-dozen more home runs...I have his Gold card already, and Cutch cards might be a little more obtainable. All those retired fans out in the desert don't want baseball cards any more. But here I am typing again, what's up with that? Here's another card: 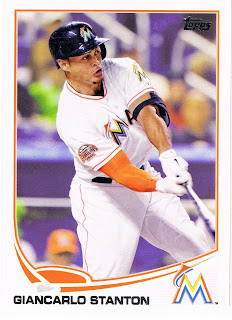 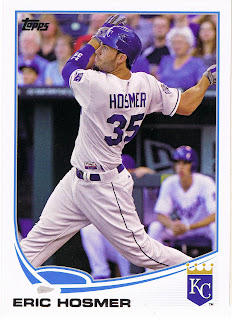 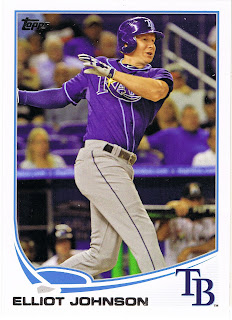 Does anyone really like switch-hitters? I dated a switch-hitter once. It didn't end well. I wish she would call me though... 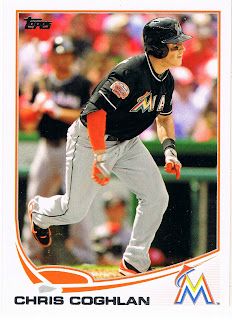 This card is like a memo. To: Wil Myers baseball card investors. 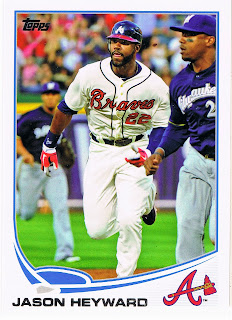 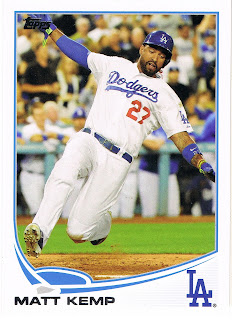 Wheee, I can fly! I've been trying to figure out a way to post that card all year long. 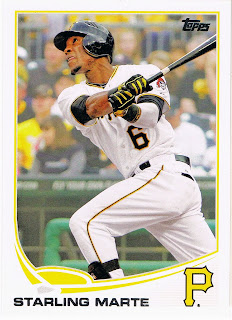 I still don't know what is in his back pocket. 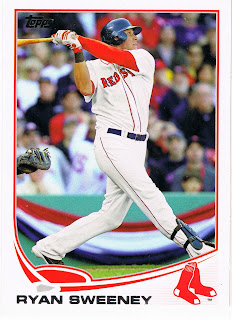 I don't remember seeing that last guy playing in October. Oh, yeah, that's because he plays for the Cubs now. Played 70 games this year in Chicago actually. Didn't make the cut for a new card in Update when all those Astros collectors demanded an extra copy of the Chris Carter card I suspect.

I watch baseball on my baseball cards far, far more than I watch it on TV. So when I started seeing all these ball players on their cards with one bare arm, I asked myself: What's Up With That?

I figured maybe that extra high-tech, special athletics-fibers sleeve they are probably wearing might make it sting less when they get hit by a pitch. I mean, for hit-by-pitch questions, all I have to do is turn to my trusty baseball card of Shane Victorino and see what's up, right? His Series 2 card (Sorry, my scanner already dell asleep, and since it runs on an ethernet cable for some stupid reason, it is hard to wake up. Something to do with the 'ether', I guess, you'll have to look up his card in your own collection for 'proof'.) ... anyway, on Victorino's card he is batting left, with his one extra-long sleeve on his right arm, though of course he typically just manages to artfully get his uniform brushed, not actually take a hit on his arm, 'kept when he does, he squirms around like it really does hurt. Aww.

But Victorino is a switch hitter, or was, or will be again next year, or who knows? They can't be trusted. So I knew I would have to just do my homework. Thankfully, I could use my baseball cards for the task. Was this extra sleeving of one arm in any relation to going up to the plate?

You've seen the results above. On 4 of the 12 cards (ignoring the switch-hitter card) - a .333 average, thanks baseball for teaching me math, the extra sleeve would be deployed facing the pitcher. On 8 of the 12 cards, bare skin would face the pitcher.

So despite my baseball cards' best efforts, I am no closer to unraveling the mystery of Only One Sleeve. So, What's Up With That?

Maybe my baseball card waitress might know. Excuse me, miss...

Posted by BaseSetCalling at 8:42 PM
Email ThisBlogThis!Share to TwitterShare to FacebookShare to Pinterest
Labels: 13 Series 1, Only One Sleeve, What's Up With That?