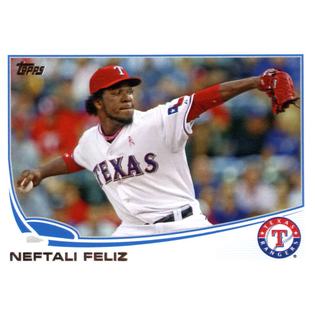 Oh gee, what am I doing with a Hockey trade headline and a picture of a baseball card?

I just couldn't resist writing up that headline. I was reading my free-in-every-hotel USA Today this morning, and it informed that the Dallas Stars traded winger Brenden Morrow to the Pittsburgh Penguins for rookie defenseman Joe Morrow. Sadly, they are completely unrelated. I returned quickly to my laptop to see which sports section would write the obvious headline for the trade.

The answer? None. So I had to put it out there. I mean really, who could resist such a jaunty headline? Apparently, each and every sports editor in the USA and Canada. Sports is always so serious now. Here's all the details on the trade, from the Pittsburgh paper.

So why is Neftali Feliz overseeing today's abnormal daytime babblings? Well, I need another copy of his card for one. I already have him on a couple of Frankenset pages. He gets a Horizontal card this year, one that looks like a set-up for a Fernando Rodney arrow-shot. He looks like he is just about to blow a speedball past somebody. I've always liked this particular action shot pose. And, Neftali is sporting an Alternate Cap. That Frankenset is getting off the ground pretty slowly, I only have 3 cards in it so far — all Rangers from '13 Series One. Normally the Rangers wear a blue cap; sometimes on card's it so blue it looks purple. Like the Jurickson Profar hype cookie, errr, Rookie Card, for example.

But I want one more copy of his card because of his cool red glove. Look, I have Cool Gear. That page has Adam Wainwright and Starlin Castro on it so far, with a Jose Bautista card on-deck to join, when the sorting gets a little more caught up.

It is a confusing time of year in baseball for baseball card collectors. Everyday there is a long list of Transactions, For The Record. I like reading them in the newspaper, in the tiny print. Yeah, I know, there is a website for that. Probably a smartphone app and a Twitter feed too, so I can have up to the minute knowledge of just when last year's 13th round pick straight outta Florida Gulf Coast has finished negotiations and finally been Assigned to some A-level minor league team on the Florida Gulf coast somewhere. You know, so you too can be ready for the inquisitive glance from the actual GM on whether that was actually a sleeper selection that should have been made in the single digit rounds of the draft, the way Jonah Hill was ready for such questions in Moneyball.

One of this weekend's Transactions was Cleveland's outright release of this guy: 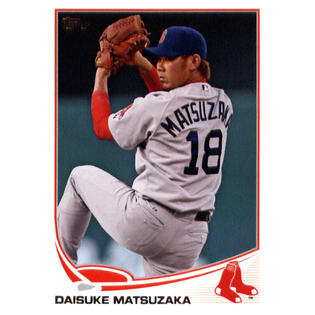 Probably another Why, Topps, why? effort in the minds of Red Sox collectors this year. The Transaction list usually has several details on which cards are now well on their way to being Sunset cards.

Veteran players can go through lightning quick changes of uniforms this year too. Endy Chaves will probably be in the '13 Update set this year....young mid-Atlantic collectors are probably trying to figure out how to designate Chaves for assignment to their Seattle Mariners cards when he is wearing the fabulously bright alternate home Orioles uniform on his Series One card this year, despite signing with the Royals in December. Maybe Ronny Cedeno will be in the Update set too. The Astros have to get cards in some set of baseball cards, don't they?

But getting back to tomorrows being traded, another recent Cleveland Transaction is more of why I called this time of year confusing for card collectors. You see these cards with a bit of buzz, like this one: 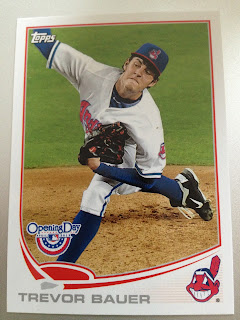 Yes, I know, Photoshop. Not the greatest effort there either, but service-able. Trevor always sports Great Sox, wherever he pitches. I learned that from my baseball cards. I find it a little more interesting that Topps went with a new photo for the card, one of several like it in the new Opening Day set. I'll be working up a post on that, probably for tomorrow.

Does Topps feed off the buzz around media darlings like Bauer? Perhaps. I don't read that stuff, I read baseball cards. After getting his official Rookie Card in '12 Update, a base card in Series One, making the cut for the Opening Day set, and even a spot in the '72 Mini insert set, it seems like a head-scratcher when you read "Cleveland optioned RHP Trevor Bauer to Columbus (International League)" a week before Opening Day. A bit of baseball card hype dashed again.

Or is it? Looking at MLB rosters through the prism of baseball cards can be a little deceiving. There is some rules / player-contract structuring device happening this time of year where it is to an MLB's team advantage to have a young prospect start the season at the AAA level. I don't understand how that all works, but I know a number of those excitingly-fresh-with-anything-can-happen-anticipation Rookie Card players have been assigned to the minors this way over the last few weeks. A number of Baltimore Orioles come to mind (hot card pitcher Dylan Bundy opens the season at Double-A); Mike Olt of the Rangers was just on this list as well.

So, I guess if you are the GM of the greatest baseball team ever assembled, in your own head at least —as we all are; then baseball cards can only help you so much. I don't "play" in a Fantasy League. I just keep re-arranging little pieces of cardboard instead.
Posted by BaseSetCalling at 2:05 PM
Email ThisBlogThis!Share to TwitterShare to FacebookShare to Pinterest
Labels: 2013, Alternate Cap, Cool Gear, Great Sox, Horizontal, Opening Day, Spring Training