It just goes against all that is baseball cards. To me at least.

When I was a kid, buying a Complete Set of cards was an unreal proposition. Surely, it was something only this kid could do: 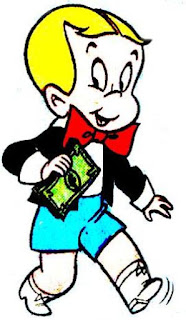 And now, nothing has changed. Well, wait, everything has changed. I could walk in my nearest un-friendly big-box 'mart and buy a Complete Set whenever I want. It would even certainly be way, way cheaper than buying fat packs, blasters, rack packs, and plain ole regular packs and ending up with piles of extra baseball cards and all those usually silly inserts and dastardly parallels.

But I think I will.

It seems to be the only way to acquire the card pictured on the header for this post. And I want that card. I love the idea of owning a tiny smidgen of dirt from Fenway Park. I trust Topps actually got the dirt from there. Maybe I shouldn't, but I do. I'm not at all interested in relic cards and could care less where they come from and will most likely use any I happen to acquire to just trade for the cards I do want. 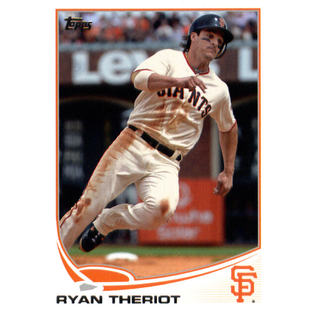 I'll have lots more to babble about Dirt in the future. I would post a more favorite selection, but my baseball cards are a few miles away right now, and Theriot's is the only one from 2013 Series One that I can remember right now (it is a pretty good one actually). I also know I will probably develop a desire to own some of the old Stadium Club cards that feature actual Dirt. In the meantime, I want to own some dirt from Fenway Park.

I have never visited Fenway Park, though I have wanted to since I was 8 years old. I got close once, and I thought I would be ticking that box on the checklist. A college buddy was renting a place right across the street from the Green Monster. How freaking cool is that? I was in Boston in late September 1991, for a series of events that also featured difficult to acquire tickets, but those were in the evenings. The Red Sox had some day games. I was so excited - I had built the Topps set that year for the first time in a long time. I love that set.

Let's go, right? Nope. All sold out, way in advance, I was told. I figured it would be just like the old Tiger Stadium - always some bleacher seats sold every Game Day. If you wanted to go to the game, you just went down to the stadium real early and got in line. But the Red Sox sold all their tickets in advance, and though I can't recall the exact baseball details, I believe Boston was still in it that third week of September, so the price for a scalped ticket was way out of my sorta post-college student range. Besides I needed the money for the night time.

So visiting Fenway Park is still very high on my wish list of things to do in life. In the meantime, I can somehow vicariously enjoy the thrill of the Park by owning that card. And it seems I have to buy a Complete Factory Set of 2012 Topps to do it.

And that will work out, because how else can I know which cards I need for my weirdo Frankensets, if I don't have a Complete Set of them to look at?

So now I have two reasons to buy a Complete Set. Though since this is baseball, I guess I should need three reasons to break such a solid long-standing tradition. I'll try and think of another one. I'll have to. It might help ease the pain of buying my first Complete Set. Did I just type that?

Why didn't I just collect The Topps Set in 2012? Well that is a story for another night. I will need more internet time to find all the right images to explain why not.
Posted by BaseSetCalling at 10:18 PM
Email ThisBlogThis!Share to TwitterShare to FacebookShare to Pinterest
Labels: 12 Series 1, 12 Series 2, 13 Series One, Complete Set, Dirt Card, Fenway