Yeah, I read the backs 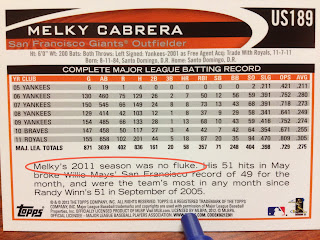 And the bon mot above is one of the better ones I have ever read on the back.

Melky was suspended on August 15th, 2012, so I'm thinking the Topps Update editor must have finished his (c'mon, don't you daydream that Erin Andrews actually does this?) work and had the cards off to the presses before that date. I'm sure they would have preferred a Do-Over on this card.

Personally, I wish Update would come out a fair amount earlier. I think it would sell better if it arrived with more time left in the regular season. I'm no expert on such matters. A release date of October 1st means many fans who's team isn't in the playoffs are probably buying football cards instead, methinks. I know Update is tied up with the All-Star game now, and the trading deadline of course.

But last year's Update set creates a question on this. The blockbuster Red Sox <> Dodgers trade was announced August 25, 2012. And Topps had time to create a few super-duper-short printed cards of the major stars in that trade. Perhaps those versions were created and printed during production and the special cards then hit the market a bit later in October; I don't know.

Probably an accidentally goofy statement on the back of the Melky Cabrera card wasn't high on the list of details to cover for the release of the set. I'm sure it is much more important to Topps to keep the amounts and distribution of their manufactured rarities just exactly perfect. But with the All-Star game on July 10, and the so-called trading "deadline" (don't ask me) on July 31st, and then a blockbuster trade on August 25th still kinda-sorta being able to make it into the Update set.....is Topps run by Europeans who just take the summer off?

It seems like when I was a kid, those wacky Traded cards came out in late summer, so you still had time to play with them, while baseball was still being played. Then you could take that card where you had crossed out one team's name and written in the player's new team and stick it in your bicycle spokes to give an already mangled card a properly mangled burial. The new Traded card set the record straight, and that was the one to keep. Who needs a card with the wrong team on it?

But there is one other remote possibility about that sentence - Topps has total faith in Melky. And some people do say that about PED's - they don't help you make contact with the ball. Maybe the greenies do though. More upper-body strength should get you more hits though, as your drives rip past the infielders faster than they used to. So perhaps Topps is declaring that Mr. Cabrera will spray the ball all over the Sky-Dome just as he did at the new Candlestick or whatever the heck they call the Giant's ball-field, and like he did at Kauffman Stadium too. But I doubt it. On both counts, if you are following closely here.

I'll be watching to see what they put on his 2013 cards, that's for sure. I'd wager that they avoid the whole thing by adding his minor league stats to his Series Two card, so there is no room for comment. 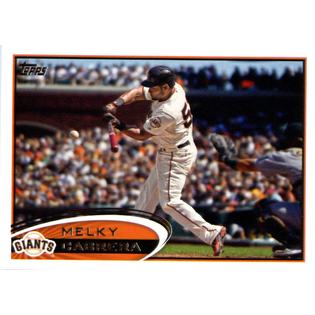 I actually love this card as a baseball card. It would make several of my Frankensets I like to look at - it's a Horizontal Card, There's A Baseball On My Baseball Card (with such good stop-motion photog action these days you can see the seams on a live pitch), and it's a Bunt Card.

I think it might be the first Bunt Card I can recall actually — I will soon post another one to launch a quest for all the Bunt Cards I can find.

And then Melky has a red bat. I can't recall where else I've seen a red bat. One other Giants card in the last 2 years I think, but I forget which. And since baseball cards are my main visual reference for the game, I really noticed this one. Now of course I discovered this card, like everyone else, with full knowledge of the partially comical Cabrera saga. But looking at the red bat on there, it makes you wonder a little.....is it a sign? Melky with red, trouble ahead? Dunno. And I haven't figured out what goofy name to use for a Frankenset full of colorful baseball gear - Hey, Look: My Bat Is RED won't work for the blue glove and pink bat I have discovered elsewhere in the world of Topps recently. Frankenset meme under construction here.

As for cards in the steroid era, I wonder if today's news on Topps remaining exclusive until 2020 will have any other details in the fine print. Not that we card collectors will ever be able to read those details, at least not until 2040 or so when Topps sells off it's copy of the contract perhaps.

But given the flap over even printing the name "Pete Rose" in tiny type on the back of a baseball card this year, it leads me to an obvious thought. If Topps is MLB and MLB is represented on Topps baseball cards, perhaps part of any PED suspension could include Topps. So a busted player would be dropped from certain sets via some mechanism.

I mean, PED's, and even non-performance enhancing drugs, are banned in part because of the poor & dangerous example they set for kids. Sometimes I think too many things in our country are set up that way in my opinion, but this is one I can agree with easily. What about the children? But I'm here to write about baseball cards, not Society.

So when the hypothetical young baseball card collector is building a set and there is no Melky Cabrera in it, even though the kid remembers him winning the All-Star Game MVP last year and he just saw him go 1-for-5 leading off for Toronto on the Saturday Game of the Week, the no-baseball-card-for-cheaters lesson hits home a little bit. If, in fact, kids still buy baseball cards, rather than just Comic Book Guys who like to hang out down at the Android's Dungeon and bitch bitch bitch about their cardboard master all day.

Just a random tangent my mind was led to by the back of a Topps baseball card. Where will these things lead me next?
Posted by BaseSetCalling at 12:24 AM
Email ThisBlogThis!Share to TwitterShare to FacebookShare to Pinterest
Labels: 12 Update, Bunt Card, Horizontal, PED PED PED, There's A Baseball On My Baseball Card, Yeah I Read The Backs