This Card Has A Lot Going On 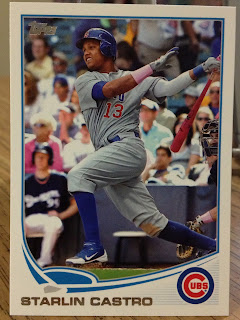 OK so it's time to have some fun with the Base Set. Some call it the "Flagship" set. Sometimes it is "The Topps Set." I like "Base Set", even though that can refer to the basic portion of many a set - you know, all the cards pack rippers blow past searching for the precious 'hits.'

This card first caught my eye for putting together the special binder pages of the various card elements that I like for whatever reason. I'll be previewing a bunch of those now.

First I liked the Great Sox. A Cub on the Sox. You'll see. I forget the terminology used in baseball for this look. Only some players sport it, and some of them only some of the time. Perhaps some teams make it mandatory on certain uniform theme days? I will be investigating.

Then I noticed the patch of dirt on Starlin's knee. So technically it is a Dirt Card, though it probably wouldn't make the cut for me. And is "Starlin" just simply a top 10 current baseball name or what?

Next I realized he was using a red bat, I thought anyway. Baseball cards were leading me astray here - two other cards (Giants) in Series One feature red bats. My curiosity grew.

And there is a Lurker - in this case a Brewers ball boy. A Ball Boy card - how many of those are there? I'm open to seeing more.

Another baseball clothing trend appears as well - Only One Sleeve. Another investigation will have to be launched using my trusty baseball cards.

Of course there is an even more obvious item on Mr. Castro there - a large pink wristband. Is Starlin going for the bling look here, maybe to score points in The Castro? Wait, the Cubs are playing at the Brewers, not the Giants.

Hey, wait....the catcher has a pink wristband too. And there is a Pink Lady in the stands. Have I been drinking Pink Ladies? No, I have to work tomorrow too. It's that time of year for me, just like the ball players. Busy.

By this time I am wondering what The Uke is saying on his radio call about this pink baseball game. I caught a little bit of his broadcast today. He was nailing the details on a story about a 1970s Brewers pitcher. In mid-season form, his co-hort ribbed him a little. It was good to hear him, I will be listening to him a lot this year. You will all miss him when this can't be done any more.

This would cause a summer of mystery were this card to have appeared in the 70s or 80s. These days, there is technology for such questions, and that technology tells me this is a shot from the May 13, 2012 game in Milwaukee.

Mother's Day. The Brewers and Cubs wore pink items (I think one player had pink shoes), and used pink bats.  Something about the photo angle and shadows make the bat look a little more red, but the vast Internet can show you the actual pink bat if you want. You know, for Breast Cancer Awareness. My mom survived Breast Cancer. My aunt did not. That could have turned out differently.

So, good job MLB. I hope more shots from this game might turn up in Series Two. The Cubs won the game by the way, 8-2, their first victory in Milwaukee in a year. Starlin went 2-for-5. Maybe the Cubs should try the pink bats more often.

I tried to make it into a wood-grain card for you '62 and '87 lovers. That partially worked. This is surely one of the best selections to obtain in the Pink Parallel version.....I'll probably have to settle for the Purple. A Purple-Pink card. That will be kewl. Hint hint.
Posted by BaseSetCalling at 12:07 AM
Email ThisBlogThis!Share to TwitterShare to FacebookShare to Pinterest
Labels: 13 Series 1, A Lot Going On, Dirt Card, Great Sox, Lurker, Only One Sleeve, Parallel Problem, Uecker