No one likes cutting their own cards... 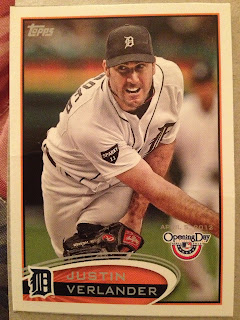 ...but it can be worth it. Fortunately, I don't have access to my random amounts of old Hostess cards to scan some severely sad seventies scissors selections.

So just where did this 2012 Justin Verlander card that you've never seen before come from?

Here is the source material: 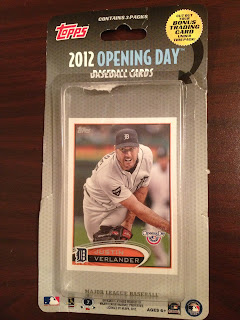 Courtesy of Geoffrey once again. Who's Geoffrey? Which blog is his? No, no, Geoffrey is the name of the giraffe that is the mascot for Toys R Us. This is a blister pack that held 3 packs of '12 Opening Day, with the usual T-R-U mark-up, so it cost $3.99 for 3 packs. I guess the cut-your-own bonus card is supposed to help make up for that. It has been nice buying cards from Geoffrey this month at least, when the big ole cuddly giraffe is offering them up at 20% off.

And there are random surprises about the 2013 Opening Day blister packs at Toys R Us too. I'll cover that here very soon.

Although it clearly states "Cut Out Your BONUS TRADING CARD Under This Pack" at the top of the blister there, I didn't quite understand that part. I'm slow sometimes. I thought there would be a bonus card in there loose, so I wasn't all that careful peeling open the blister and I put a crease in this 2012 Topps Opening Day Justin Verlander image-variation card. Short Print? Well, in this hobby there are no hard and fast definitions of that term, that's for sure. So I'll leave that alone for a second.

It is interesting that Topps put the April 5, 2012 date on that particular piece of cardboard, just as they do with the Opening Day parallels of late, and only on the parallels now. Does that imply that some of these variant cards might have a color parallel? Don't ask me. Were any printed and cut in the normal process? Again, dunno.

I have put off this post for a few weeks of owning this "card", because I seriously didn't look forward to the required scissors work. Overall it came out pretty good I think. Two slight creases, one wavy edge. The word "mint" will certainly never be attached to the effort though.

Which was OK, but it made for good practice to get this card: 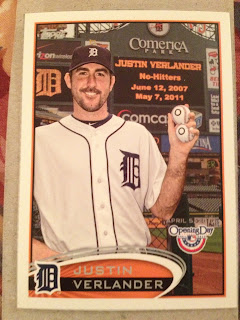 YES! I wasn't looking forward to the effort required to ever get this one. I didn't buy many cards in 2012 (a story I keep promising to tell here) and I'm going to just buy a factory set of them. (Horrors! Yes, I know.) But that means little chance to ever pull one from a pack, or any of the other short-prints from that set to trade for it. And I will have enough of a climb to get the '13 SPs that I want.

I hope maybe to discover the story of this card somewhere. Did they really put that on the scoreboard at Comerica for this shot, or was it done later with digital wizardry? Lots of questions on this one.

For the first week I owned these I thought I might have some fun with saying I scored a 2012 Justin Verlander Short Print Blank Back 1/1!!!!! But then I looked at the actual back: 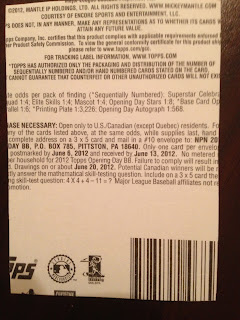 Pretty boring. And I would just add that I will still use this platform to wonder about the high value of the 1/1 blank back cards. Who wants a baseball card with nothing on the back? Yeah, yeah, there is only one of them. In the Whole World! And I own it! That's what makes it valuable Dude! OK, you get your kicks your way, I'll get mine a different way.

So, of course, I still don't own the 2012 Topps Justin Verlander Short-Print Image Variation baseball card. Technically. And though it is a little hard to see in the small picture above, there is just a trace of the residual gray cardboard this wonderful slab of a cardboard hero was cut from. A Printing Error card. This makes it totally unlike any other version of this card, anywhere. A true 1/1. And I own it.
Posted by BaseSetCalling at 11:45 PM
Email ThisBlogThis!Share to TwitterShare to FacebookShare to Pinterest
Labels: 2012, Comerica, Geoffrey, Opening Day, Short Prints, The Pitcher Isn't PItching