How do you trade these things? #2

One of my recent trades arrived in a very interesting package. It wasn't a PWE, but it wasn't in a two-bucks-and-change bubble mailer either: 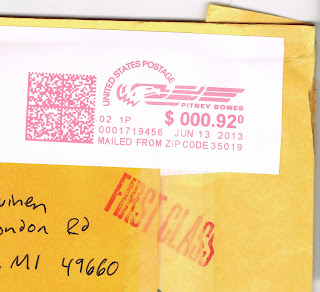 I was receiving just a single card; it arrived inside that mailer packaged in a top-loader.

The first thing I learned from this package was that I could find 5"x7" bubble-padded mailers if I tried a little harder. The 6"x9" size is much more common.

But of course what catches your eye the most is the price — just 92 cents. Double the price of a PWE, but less than half the price of the usual layer of protective bubbles.

Eureka! I thought. All I need is those smaller envelopes and I could cut my trade costs in half.

I got some trades packaged up in 5"x7" mailers ready to go and off to the Post Office I went....

...and was promptly charged 67 cents. "This should have arrived Postage Due", I was told. They tell you things at the Post Office, and you listen. It's a rather one-sided place.

I asked them how I could have received a package like that without Postage Due, and why all my packages cost $2.07. They said the package pictured above had postage applied by a private postage meter, probably in an office. They also informed that only "flexible" packages are eligible for a First Class rate that low. Any envelope/package with a top-loader in it does not count as "flexible." They could not explain why the above package should have cost $1.59 total when all my other card packages cost $2.07 all the time. I had a distinct impression they don't know these things either; they just do what the screen in front of them tells them to do.

They were nice enough to take the 67 cent charge off my bill for the day. Which was nice, but this is one more adventure at the post office that will eventually get me to read that Bukowski novel about the crazy place.

I would be perfectly pleased to pay 67 cents in postage due on a baseball card trade. I say that because I know the Post Office people are too lazy to attach 67 cents in postage due to an envelope delivered right to my house. That would be like, work, or something. I'm sure they would do that in a heartbeat for something sent to my P.O. Box, but I don't trust them to cram baseball card packages into my P.O. Box.

I just wish I had access to my own postage meter to cut my bubble mailing costs in half. I see that my dribble of eBay packages starting to arrive only sometimes reveal the price of the postage: $1.12.

I think the next time I have less than a half-dozen cards to send out, I will try one of these mailers: 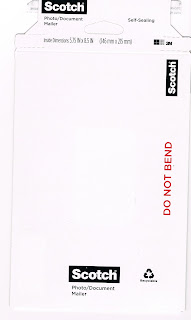 A small problem there is that it cost $1.24, but that was as a single at a Big Box store. I'm sure they would be cheaper in bulk at an Office Supply-type Big Box store. I predict the postage will be some totally new figure I haven't yet experienced.

And now let's look at a pretty baseball card. Talking 'bout the Post Office and scanning envelopes is boring, but I thought y'all might wanna know what I found out. 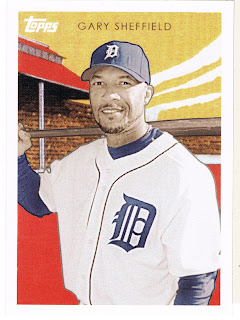 This came from the Wal•Mart edition of a blaster box of 2007 Topps Updates & Highlights, which contained a set of these. I also have Magglio Ordonez and a Tim Lincecum, though 'The Freak' might be on his way out the door; those two cards are in other rarely reprinted styles. This one explains "The front of this collectible card is based on the 1933 Tattoo Orbit design." Topps rarely misses a chance to point out that their near 9 square inch pieces of glossy card stock are "collectible."

Tattoo Orbit. You can just hear the Topps editor making picks for players to match with old-timey sets....'and Sheffield tattoos one into orbit.'

I'm not much of a fan of Sheffield, so, yah, that one's up for trade if anyone wants it. I remember listening to the last few games of the 2007 season to possibly hear the call on his 500th Home Run, but then I listen to every Tigers game I can, particularly at the end of the season when the expanded roster players are getting some time in The Show and you can start daydreaming about next year's starting line-up. Sheffield didn't hit his 500th till the next year anyway, when he played his final season with the Mets.

So there you have it, maybe discovering two little-known sets of baseball cards for clicking on just one blog post that didn't look too exciting ahead of time. Now if I could only get the nice people down at the Post Office to hand out some 2-for-1 deals.
Posted by BaseSetCalling at 2:49 PM
Email ThisBlogThis!Share to TwitterShare to FacebookShare to Pinterest
Labels: Let's Trade, Post Office, Suppliezzz