The Parallel Colors of Baseball

I like seeing that on vintage baseball photos, for example on baseball cards: 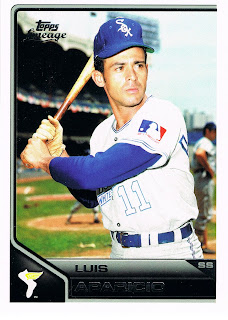 An MLB logo patch card (plus lurking light-towers) ... ahhh, I have a vintage meme to chase.

Of course, great baseball cards can be all about colors too: 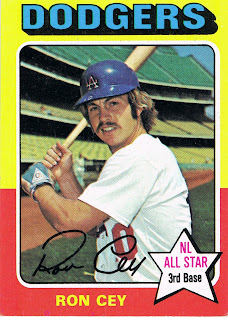 I've always thought it unfortunate that blue/red was never a color combo for '75 Topps. But I love this card anyway, with even more colors in the stadium seats. That background has always made for great cards, because they have great lines. As on the 2013 Jacoby Ellsbury card, somewhat of a rare image these days.

I've always been a '75 type collector. Mostly of course because that was the first set I ran smack into when I was a child. If that had happened a year later, perhaps I would be more fascinated with cards with generic player silhouettes on them instead of color framed cards.

Now I do like white border cards, and black border cards too. I dislike all of the wood border cards and plan to get all of them out of my collection eventually. Thought that might require selling off the 87s by the pound.

But mostly I like cards with color borders. I'm happy with even what you might consider garish combos that should have never been made: 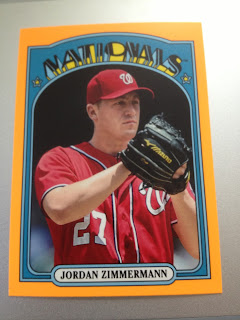 I would have posted some other 1975 craziness, but Cey is the only '75 I own in this building as I type.

So I went with one of the new Archives Day-Glo parallels to illustrate my strange tastes. I have been looking forward to scanning one; my scanner makes them look light pink too. I could have worked longer on a nice photo, but hey, it's a holiday. Anyway, on this card we have a red uniform, some blue framing with a bit of yellow, and the ridiculous hunter safety orange border that has to be seen to be believed. I will be collecting these ... only the '72s, and will have a trade post on it in a week or so.

But I do like classically attractive baseball cards too, and I like it when team colors and card colors match up in ways I like. I enjoy the visual art of cards, as well as using them to keep up with baseball information. They are invaluable for listening to games on the radio.

So I really like this year's 'Sea Turtle' set, due to the tasteful use of primary colors on them. But given my love of color border cards, naturally what I like best this year are the parallels.

Everyone comments on the color-bordered parallels. Since I am writing about red, white, and blue on Red, White & Blue Day, I will stick to the red and blue parallels for today, and go back to discussing zany combos some other day. I'll try and use new Series 2 parallels as examples, so you jaded types have something new to see.

One thing I always see written about parallels is how nice a blue-team card would look on a blue-bordered parallel: 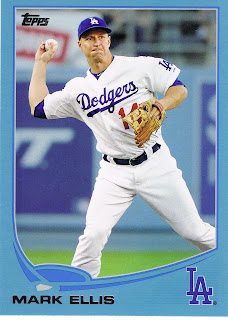 I don't really get that sentiment. How much blue do you want on a card? Andre Ethier's card in Series 1 has a bit more if you really want. I traded it away at the earliest opportunity. The Ellis card didn't turn out too bad though, compared to this one: 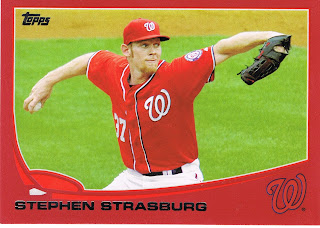 Ugh. We almost have a new contender for the reddest-card ever, though I don't think any card will ever knock the 1990 Ted Power card off the spot (my "None More Red" post), at least in my collection, probably only because there is no home crowd in the background. Though I prefer cards featuring any team's solid color alternate uniforms, and have posted them from Series 1, the teams with a red logo on this year's cards don't turn out that well with a red border.

Sometimes the conflicting thoughts about contrasting cards draw in teams that don't have anything to do with the color red: 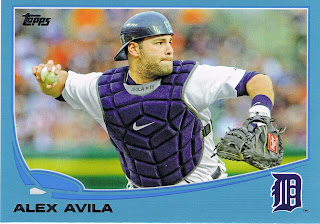 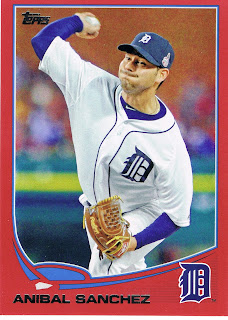 I think the Sanchez card looks much, much better. The red border contrasts perfectly with all the blue portions of the Sanchez card, compared to the redundant blue all over the Avila card. The color of the Sea Turtle does vary at times though: 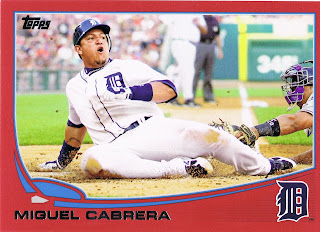 Cabrera's turtle is just a little bit lighter blue. The horizontal cards are clearly all from the same sheet as they always appear in packs together, and sometimes not at all. Packages with parallels such as the retail blasters, can feature 20 horizontal parallels. And then somehow that sheet gets a lighter tint on the turtle.

That can make or break a blue turtle blue border card in my opinion. And there is one exception to this, on the AL League Leader cards in Series 1: 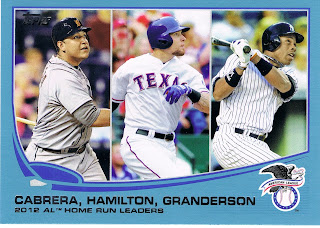 There the much darker '13 main design element works much more nicely with the blue bordered parallel. Unfortunately, that dark blue isn't used on the league specific cards in Series 2 - the Cy Young, MVP, Rookie-of-the-Year, and new Defensive Player-of-the-Year cards. Mike Trout's award cards even get the normal red on all other Angels cards. The blue could have made those 2 cards stand out a little more. It's all about the details, Topps, the details.

In general though, I like the blue parallels the least, due to the washed-out near-pastel color used: 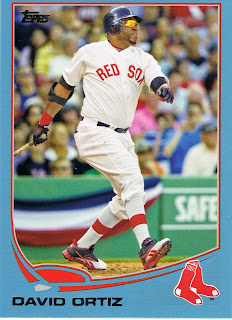 My scanner cut some of the top off there, not Topps. A bold primary blue with the red teams would have looked much better I think. Wal•Mart signs are a deep, deep blue after all. I will put together a set of Blue Red Sox, out of all the "red" teams. Sometimes I pick my personal subsets on the goofy names. Perhaps you can predict which team gets the purple treatment, aside from the Pirates. The red parallels are much closer to a primary red, and I think make sharper cards: 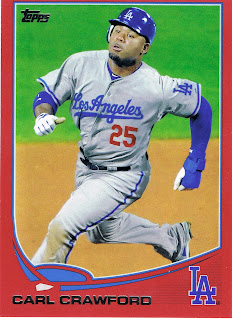 Bad scanner, bad. I like the Dodger cards with the red uni #s and the red borders. Red, White, and Blue cards, more so when they aren't in their road greys.

Now there are a number of Red, White, and Blue teams in the league that use both red and blue in their color schemes. Even the Nationals do this with their very nice alternate-blue uniforms. How well that works on cards depends on a few things. The Braves, for example, receive a red team logo with a blue sea turtle, so it is hard for me to really like their blue or their red parallels. Sometimes I pick a purple parallel for such teams as I assemble my parallel project, as Red + Blue = Purple. Subtle, huhh?

Overall though, this has been almost my favorite red border card this year: 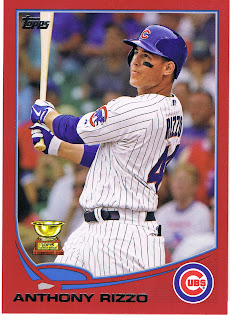 A near-perfect classic. Bits of red and blue all through the crowd too. If only they had used that darker turtle...still a great card. You have to be optimistic to be a Cubs fan.

That one really puts the Series 2 Steve Lombardozzi card to shame - another Topps All-Star Rookie Cup card just ruined by a goofy image I don't want to post; you'll see it anyhow.

But I have found one other card that tops it in the Red, White, & Blue department. No, not the hard-to-come-by Opening Day Highlight cards that make Opening Day seem like the 4th of July that I have posted previously.

This one came from the Heritage retail parallel set, from Target. I got very lucky in that I specifically bought just one Heritage blaster at Target in hopes of getting one red border card to trade for it. I recently traded away my '13 Heritage Andrew McCutcheon short-print, and I already miss it. He gets such great cards. But I am cheered to know that there is a red border version, which I want very much. Very much like this one, which is on it's way to a new special set of special baseball cards I will display all together, and not because I happen to enjoy cloud cards: 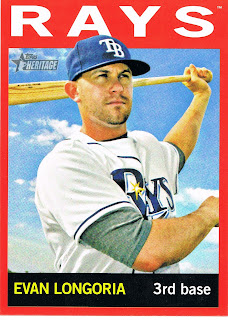