Why Baseball Cards Are Expensive

OK, first, this baseball card is not expensive: 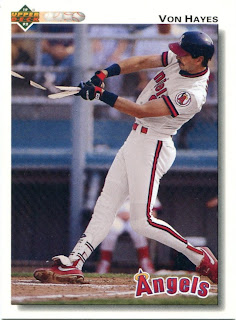 But hey, I can't just ramble on about baseball cards without a picture to lure you in, now can I?

All pictures in this post courtesy of Dime Boxes, by the way. Thanks Nick! Without Nick this post might be a little lacking in the entertainment department, but I'll do what I can.

And, second, I know that some baseball cards are expensive, and some aren't. "Expensive" is obviously a very subjective word for different people. But if you look at the true cost of near 9 square inches of glossy card stock vs the price of a baseball card, they can appear to be very expensive indeed. The more expensive they get, the greater the distance between the intellectual cost of the physical card and the emotional value we place on those shiny slices of card stock.

I often think of baseball cards, an item that no one needs to survive, as an object much like the Coke bottle in the classic, quirky, fairly-unkown-today movie 'The Gods Must Be Crazy'.

I probably began to grow that perspective quite a bit from living and working with immigrants who regularly wired 3/4 of their paycheck back to home each week, as that money was keeping several of their family members alive. Baseball cards are simply out of the question for such people, though of course they would be more interested in the stars of futbol.

Quite a while back in time, if not in volume of posts, I promised to tell you the story of how everything humanity buys is priced, as told to me by an Old Farmer. I think my fascination with human nature and retail activity, two intertwined subjects that oh so many proto baseball card dealers do not always understand very well, began when I heard this.

It was a nice sunny Saturday one winter in eastern North Carolina. I was supervising a tree planting job for one of the typical clients in the business, an Old Farmer. He asked me a staple question in the business - "So what do you do in the summer time?"

I would get this question a lot back then, and still do sometimes today. Planting bare-root tree seedlings is a seasonal occupation that must be done during the cool weather months. But this question had more behind it back then, when I was working for someone else, who lived down at the beach. In fact the address for the business had the word "beach" right in it. So we would get this question on the suspicion that we were charging so much money for our services that we could then just lay around and be beach bums all summer long.

I explained that I did work all summer, mentioning that I liked to cut firewood, but it was a tough business because the price never went up. Too many people enjoy cutting firewood almost like a hobby, and weren't really cutting firewood as their primary income, so they had no incentive to price the firewood in a way to fully support themselves. But as long as some hobbyists set prices, one has to compete with their price for your own sales by matching their price. (Sound like any hobby you might know?)

I continued that I could do OK by selling small bundles of firewood for use in a campground, at a much higher price than I could get for large volumes of wood for heating a home. In baseball card terms, I could do better selling singles than boxes.

And then the Old Farmer explained all economic activity to me.

"Well that's easy enough to understand. You sell something a man has to have to have to survive, like heat for his home, and that man is going search high and low all over the country-side to get that item for the lowest possible price. 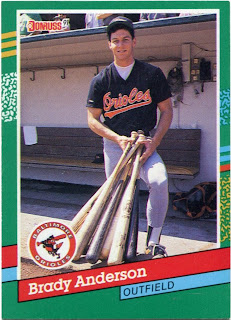 Now you sell him something that man doesn't need at all, like a little pile of sticks that he could pick up for free in the woods on his way out to the campground for the weekend to bang his girlfriend — and you can charge that man most any price you care to name."

It's not a perfect analogy to low-end baseball cards, sure; I did just point out that baseball card dealers all have to deal with competition. "But I could buy that card on eBay for ...." Even buying purely luxury items, we humans are shoppers by nature. I was tempted to end this post at the Old Farmer's quote mark there.

But of course I would rather babble on baseball cards a bit more. Probably where the Old Farmer is the most dead-on is for products like Topps Museum and Topps Tribute. Products that quite simply make me laugh, actually. I just read a complaint about a Tommy Milone /5 card in one of those. LOL!

The Old Farmer, he wouldn't laugh; if he knew someone buying "packs" of such cards he would probably start asking them probing questions trying to figure out what else such folks might think they "need", particularly if there might be any such item he might have access to.

And yes, I know, the purchasers of Museum and Tribute laugh at me and my silly purchasing of cards that aren't even worth the card stock they are printed on. I have read somewhere this year on this here Internet that a standard wholesale price of lots of brand new common cards, i.e. "base", is just 4¢ a card, or even a little less. Surely it costs Topps more than 4 cents to deliver a baseball picture card into my trembling hands every time.

Now the Old Farmer would probably perfectly understand baseball card collector complaints about all the scams associated with 'The Hobby', just as he understood my frustrations trying to compete with a guy with a pick-up and a chainsaw just happy to be picking up some cash money by being out in the woods (like me).

When people put such a high social/cultural/mental/psychological _value_ on an item that actually _costs_ just a tiny fraction of that amount, that is going to attract a certain type of person intent on trying to get some of that value into their bank account, with (counterfeitters) or without (thieves) spending that trivial cost to get it.

Baseball card collectors or dealers or collector/dealers or dealer-collectors frequently do the exact same thing actually, except for the very few that are smart enough to live by the #1 truism of another profession designed to exploit human desire for things they don't actually need: "don't sample the product."As in, don't rip any packs, just buy and sell cards.

I'm not saying card dealers are scammers and criminals, not at all. But dealers (who often think they are simply collectors) that get inventory as rippers or breakers, are participating in that same age-old human desire to get something for nothing. "This next pack will have the 'hit' that pays for this whole case, I just know it." You know the deal. Part of ripping a pack is always the hope to find that one expensive card in there.

I just spent a long week participating in a frustrating break of some regular Topps cards. I rationalized it as a way to build up a lot of pieces of my Parallel Project. But the process came with that potential of hitting one 1/1 card (or hey, maybe two) sprinkled through every product now. I would be a liar if I said I wouldn't have picked that card for myself if enough stars aligned with the moon for me, and just picked the parallel cards I "need."

So I'm no different than high-end baseball card customers in some ways either, though I know I will never buy such so-called baseball cards. And the Old Farmer would definitely laugh at me if he heard me complaining about the cost of being in that break.

I just wish I could get that Old Farmer into the same room with one of the most appropriate non-baseball players I've ever run across pictured on a baseball card, though I don't own the card and had to crib it from the 'net; and don't desire to own it either. A man who knew a definite something about us: 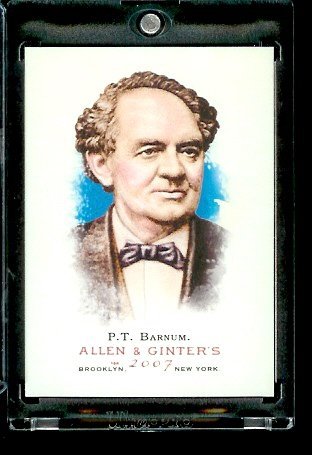 A man who told us the same thing the Old Farmer told me - there's a collector born every minute.


Posted by BaseSetCalling at 2:37 AM
Email ThisBlogThis!Share to TwitterShare to FacebookShare to Pinterest