Then when you hit the ball, run! 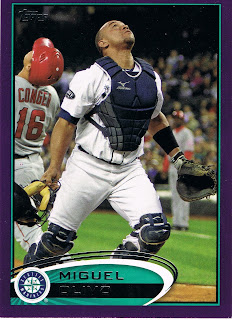 Gazing around the card desk for a card to scan and I find this one. 'cuz I haven't figured out where to put it yet. Two catchers gazing up into the night sky at the same pop-up. It's a play at the plate, sort-of, technically. All that, and can I get a bag of chips with this? It might be a while before the ball comes down, I might need a snack.

I'm mostly divesting the random amounts of 2012 parallels I have. But I do really like the Surfin' Purple Teals. Where does that team play, you ask? That would be in Seattle. And here I thought it was too cold to surf in Seattle.

No point in going for a Team Set of them, as they only exist for Series One last year unfortunately. One of these days I have to figure out if 9 of them exist to make a pretty binder page. I also have Steve Delabar, possible All-Star from the Surfin' Purple Teals. Doubles, even.

And I'm mostly investing my time in organizing the Parallel Project. Using the Opening Day Blue-Foil cards, which look really good, is numerically challenging to cross-reference. Without lots of cross-referencing, I buy a parallel color I already have on that page. Twice so far.

But don't worry, my gaze takes in stacks of cards attached to probable blog stories. Base Set might have to call you back however, as I am about to head out to yet another underpopulated area of the United States to bid on some work for a week. This will involve some bits of prospecting I expect.

No, no, I won't be haunting Instructional League ball-parks with my secret stash of back-door superfractors and a fine-point sharpie, sweet-talking all those future first ballot hall-of-famers into making me rich before they get on the bus to Rancho Cucamonga.

When I travel I go spelunking for dusty gold in the form of old baseball card products that have been stuck in out-of-the-way little box stores for far too long. Which hopefully leads to unexpected card discoveries like that Miguel Olivio up there, who was rescued from a particularly dusty Toys-R-Us, a chain that never seems to take cards off their shelves not matter what. Though I would like to discover I'm wrong on that, and find the link to Geoffrey's secret clearance website with all his unsold baseball card blister packs. I mean, they gotta end up somewhere...

This time I will leave home with a stash of scanned cards ready for some babble-head action. And a wireless keyboard. Now if I just have a bit of cell service, though I might likely be just a bit outside...
Posted by BaseSetCalling at 1:04 AM
Email ThisBlogThis!Share to TwitterShare to FacebookShare to Pinterest
Labels: 12 Series 1