The Italian God of Walks? 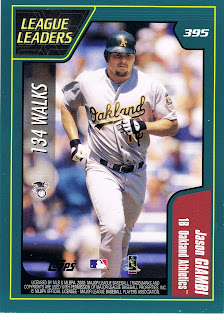 Can't say I've ever seen a League Leader card for Walks before. Well, at least not since I bought this card 12 years ago. And promptly forgot all about it.

Maybe this is one more reason the A's started building a team around OBP (On-Base Percentage) for the 2002 season, just after Giambi left to free agency. Of course, I only know that from the movie version of Moneyball. Haven't read the book yet, though I have been starting to lazily watch for a copy.

Speaking of Moneyball, I would think that movie would be an ideal toppic for a set of baseball cards. There is that one guy somehow involved with owning Topps who has a bit of Hollywood experience that you might have heard of that you would think could help with the right rights Topps would need. So many ways they could make cards referencing that movie.

Anyhow, was sorting some 2001 Topps doubles for a trade and found this one. I have about 3/4 of the set myself and will work on completing it later this year, so don't give your commons to the orphanage in Guadalajara just yet. Not my favorite set ever by any means. Dark color borders don't really appeal to me; in fact I think the scan looks better on my computer screen against a white backdrop than the real card does in my hand. They probably don't irritate as many people as bright color borders do, but they probably don't excite very many folks either.

And these cards are not aging well as the foil printing on the fronts (no foil on the reverse of the card, which is pictured above) blurs out increasingly over time on some cards, even in penny sleeves. Maybe they came in the packs that way, I can't remember. I probably just got pulled in for a year by the 50th Anniversary hoo-hahh. Actually, I do remember collecting in 2001 fairly well and have 4 different half-completed sets to show for it. I think I will just do a whole 2001: A Collecting Odyssey some other night.

But I like this League Leader card. I don't much care for the front of it. The National League lead jerk-face is on the other side of the card. I always liked his father so much more. How many cards feature two steroid players on one card? Oh, yeah, a whole bunch.

I have no idea if Topps has ever made a BB Leader card before or since. There is also a card for leading in Hits, and Slugging Percentage as well, another category I've never seen on a card. The two-sided approach is also unique (in my experience at least), with the National League Leader on the front and the American League guy on the back. It would have been more neat if whichever of the two led MLB would have been on the front. Of course the OCD collectors would probably complain about that though. Is it OCD for me to complain about the reverse?

How does he compare to Youk? Pretty favorably. Youk's career has been much shorter and doesn't look like it will have much more length to it. But on the percentages about these things that get a little saber-ish, Giambi is much better at drawing the freebie, actually twice as good as league averages. Youkilis strolls down to first more than the average baseball player, but not quite as often as Giambi.

You know where to find all those numbers; way more numbers than can fit on a baseball card. Interestingly, Giambi led the league in walks in 2000 and onto this baseball card while only being intentionally walked 6 times. That jumped to 24 times in 2001.