I've learned a helluva lot about baseball cards in the last five months, and that has been great. One of my life lessons along the way crept up on me very slowly, but it definitively crystallized for me early this morning.

I noticed over these months of reading baseball card blogs how many bloggers have to take a break from frequent posting, and not by choice. Real Life always intervenes with life's never-ending stream of good and bad chaos, and the baseball cards have to be put down for a time.

Now perhaps at times this leads to blogs going dark for long periods, but I think more often than not it doesn't. People want to get back to socializing with others over a bit of pack ripping, card sorting, and trade pulling.

A few blogs have pointed this out very explicitly. I also noticed it early on in my own overly busy life the last few months. Then last Friday I heard a direct quote on the subject. I was placing an order for some supplies (and, heck yeah, some cards along with...you'll see) from an online vendor selected essentially at random for having both the exact supplies and cards I wanted. There was a slight problem with the billing address vs shipping address with my debit card, and I ended up on the phone with the company. This led to an incidental chat about another hobby revealed by one of my email addresses, and how rare it was to meet people with both hobbies. Then the baseball card fan on the other end of the line gave me the quote - "Oh yes, it's always nice to sit down over some cards. So therapeutic."

That is spot on. Tonight after I finish typing this post, I am going to sit down and just sort some big stacks of cards until my eyelids droop, which probably won't take long. I have some trades due to leave Base Set Calling HQ ASAP, and even one trade that has come in that I haven't even opened yet. I'm very sorry to be late and should be back to mailing, etc., on Thursday. I finish a very, very long 7 month "season" of my main work tomorrow too, and I will celebrate by going out to watch a baseball game on color television I hope.

But work has nothing to do with why I will be seeking sanctuary in card numbers tonight. Numbers have always soothed my brain. I used to look at four digit numbers and deconstruct and reconstruct them in various ways in my head, though that has faded over time. So the ever elegant game of baseball has always appealed to me....and of course led to my love of baseball cards.

Last night I had plans to finish up all the trade work I now have planned for Thursday. But Real Life intervened as it all too often does. A pet of 16 years acquaintance died early this morning as the daylight was appearing. It was that time. Unfortunately the situation deteriorated too fast overnight to ask a vet for some help easing the obvious pain involved, and it quite unexpectedly became a long hard, generally helpless night, finally eased by a rain shower supplying enough white noise for me to fall asleep. Even plentiful stacks of cards near at hand couldn't help through that night.

Now I understand this was just a four legged companion, and the loss does not compare to losing a dear friend or family member, as I know has been part of some blogger's lives this year.

When I awoke a few hours later, I had little choice but to brew up some coffee and head out to a jobsite. Over the cups of coffee, I reached for my phone to read some card blogs, and quickly found what I was looking for, without knowing what exactly I was looking for right then. It was just a simple post about the simple joy of discovering a wonderful new baseball card (one I had thought to babble about, but would have never dreamed up what my fellow blogger did), like this one following here, to supply a nice visual header on the blog rolls: 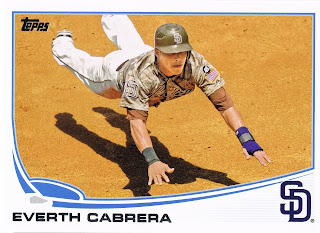 What a card. I pulled it just tonight when I turned to just a little ripping therapy, to go along with this writing therapy.

Of course it can go on the Tatooine binder page, and my Airborne page. If I were to launch a Sweet Shadows page (uhh-oh), it could fit there too. And if we finally reach 9 different players with the last name Cabrera all simultaneously active on Topps baseball cards, well...oh dear. It obviously brings to mind a certain famous player who can't currently be seen on Topps products. I vote for more stealth homage cards for that player, Topps. I'm sure it will end up on many best-of-Series lists.

What I especially like about it is the dirt stain Everth already has on his right leg — this is his second time catching air this game.

Now a part of baseball card blogging is revealing your life's connection to baseball cards. As my profile states, I came back to everyday collecting in 2011 after a long break, though I generally have some miscellaneous cards from every year of my life, even when I wasn't building a set that year. My cards have definitely added to my appreciation of the game of late, and I don't expect to walk very far away from them any time soon.

But I didn't collect much in 2012, and have hinted at some reasons why. There are two of them; I will write about the other one, with scads of baseball card pictures to go along with (I promise), another time.

The non-card reason for sitting out 2012 after such a great 2011 was a basic lack of community. Buying and absorbing baseball cards by yourself is OK, but is something that is much more enjoyable to share. Living in a small town very far from any card shop to talk cards at made the hobby quite a bit more dull. When I was back to ripping more than a few packs in 2011, I kept thinking "I will just use this new Internet thing to get back to trading baseball cards." I actually have a long experience with the Internet, having sent my first cross-state-lines email in about 1988, but not with cards on the Internet.

But I just couldn't find a hospitable place to talk cards. The card forums I wandered around just didn't do it for me. So much focus on the buying and selling of cards, and always with lots of negativity and other, well, repetitive not-positive sentiment. I could hardly ever find a simple "I love this card." Plenty of "I love the value of this card" though.

I have come to think this is likely a generational / age deal, though of course there is one great blogger who disproves that, and I think there are others. But the card forums seem to be the domain of a younger crowd on average than the blogging world. And the younger collectors, well, I shouldn't stereotype, generalize, etc. I don't know, I just know that the $ side of collecting cards is just not for me. Neither is the all too common naked vitriol nature of the Internet, where anonymous speech comes with certain downsides.

But this post isn't another woe-is-the-hobby screed. I'll bore you to tears on that topic some other night. I just wish I had discovered the world of baseball card blogs in the fall of 2011, when I first typed the wonderful words "baseball cards" into an Internet search engine. Then I probably wouldn't be eagerly awaiting the arrival of the 2012 cards I skipped over until I acquired them from nice Mr. Therapeutic on Friday.

So I just wanted to thank you all for publishing your love of baseball cards on humanity's new social medium here. It has been a wonderful five months.

Now if you'll excuse me, I have some baseball cards to sort.
Posted by BaseSetCalling at 11:25 PM
Email ThisBlogThis!Share to TwitterShare to FacebookShare to Pinterest
Labels: 13 Series 2, Airborne, Alternate Uniform, Horizontal, Shadowed, Tatooine, Therapy