So if this is a Tatooine card 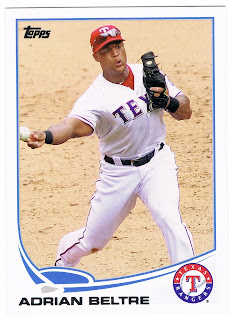 What should I call these? 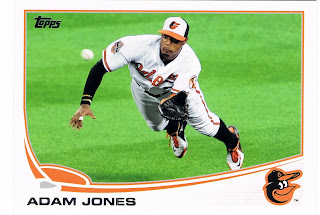 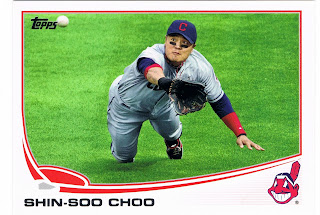 I wish I could recall which blog I first saw the phrase "Tatooine Card" on; I have run across it several more times. I did my homework and I understand it was probably first applied to the 1971 card from the 1970 World Series.

But I think the 2013 Jones and Choo cards are a new type of baseball player image, for me at least. I had seen one previously, and there are probably earlier examples I will discover eventually. There are lots of pitcher cards that come close to being 100% green in the frame, but I won't count those. I'm a purist — I collect baseball cards. 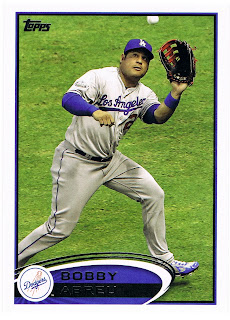 I liked the Abreu card ('12 Update) when I first found it not long before '13 Series One came out. I thought it was a nice touch by Topps, a nice action shot for his "sunset card" (another name I struggle with, another topic for another night). I even put it on a page of night cards, but ixnayed that in the long run on the outside chance the photo was shot in Arizona. Dome cards don't count.

I will be collecting each; i.e. Tatooine, and .... but I just can't settle on a name for the 'Turf Cards' - what if it is real grass? 'Grass Cards' - what if it artificial turf? Should I put a piece of artificial turf on the binder for 'em? It comes in rolls and is for sale down at the Big Box hardware store, cut a piece any size you like. You know, the Big Box stores that don't have any baseball cards. This is starting to give me a flashback......to a party in Amsterdam almost ten years ago now. A buddy of mine was squatting in a closed elementary school. He was sorta working for the anti-squatter organization, which places people to live in buildings, you know, to keep the squatters out. Europe has it together like that. His neighbors down the hall were setting up for a late-late-night soiree while I visited, which included the usual lights, DJ equipment, and rolls of sod. Yep. These urbanest of urban kids covered every flat surface with live grass. Attendees would invariably step in and run their fingers through it and plop down on it, absolutely delighted. On that same trip I scored the absolutely coolest card I own. Truly cool, not nerd cool. But that one hasn't emerged from storage yet, and that might be a while. Don't worry, you'll get to see it. Cuz I for sure want more of those cool cards. It was from L.A. actually, to reconnect this to ole Bobby up there.

Meanwhile, back in 2013, I'm still drawing a blank. "Don't Take Your Eyes Off The Ball" - what if the  outfielder already caught it? Same problem with "I Got It!"

I don't got it. I don't know what to call these cards.

Posted by BaseSetCalling at 1:28 AM
Email ThisBlogThis!Share to TwitterShare to FacebookShare to Pinterest
Labels: 12 Update, 2013, Sunset, Tatooine