Card backs could be tough to write in '14

So a while back I was wondering what Topps would do for this year's Melky Cabrera card, mostly figuring I would have to wait for Series Two.

Then my itch to find some sort of cardboard memento of last year's winning of the Triple Crown by a different Cabrera — one would think Topps would have been all over that...wtf? — led me to slowly start acquiring cards from this year's Heritage set. At least that one has great Leader cards, which is what I've been chasing. I do like Heritage, just not a great fan of all head shots, all the time. '64 is a nice spare design, with nice use of color; one of the better sets of the 60s, but there are other Heritage sets I have preferred / will prefer.

So along the way I eventually pulled this card: 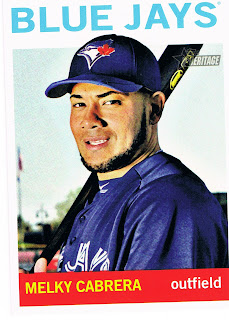 And as soon as I saw it I knew I would find out if my hunch that Topps would gloss over the whole PED topic on their glossy shiny happy baseball cards, possibly via just filling the back with Melky's complete professional statistics all the way back to the Instructional Leagues. Gee, no room left for comment.

But, I was wrong: 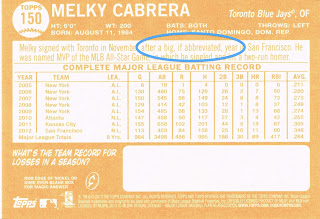 That salmon print can be tough to read, I know. The anonymous Topps scribe wrote:

"Melky signed with Toronto after a big, if abbreviated, year in San Francisco."

Topps could have gone any direction with this, due to their 21st century ability to change the font size any way it wants; Melky would have had 10 more lines of minor league stats, and the quiz question at the bottom isn't on every card. The card could have been created without any text comment at all, easily. So my fount of baseball knowledge somewhat rose to the occasion for me.

And say you're a National League fan and you're wondering if un-enhanced Melky is contributing to Toronto's implosion so far this season? I checked the website for you, since the baseball cards won't tell till next year. Melky's stats so far this year are right back to his career averages. Which aren't too bad actually - career .284 hitter, it says there in the salmon, if you squint hard enough. Good thing kids don't have to squint to read card backs, huh?

But I think, given tonight's news, that Topps might not be able to tip-toe around this subject in the future. What's that? Melky's return to the City By The Bay didn't go well? No, Melky did OK with that, going 2-for-4, though he flied-out in the 9th with a man on 1st and the Jays lost again. The home crowd, in baseball tradition, booed him steadily — I could hear that through Jon Miller's always steady-steady radio call, courtesy of the MLB At Bat app on my phone. I'm not gonna bother checking the interviews, etc., on that. That's why I like baseball cards, as you mostly get to skip endlessly repetitive sports clichés, since of course, baseball cards have their own special sets of those anyhow.

OK, OK, dear reader, I'll cut to The Chase (groan). I don't really want to Debbie Downer you away from incipient Puig mania (such a great baseball story), but I'll just say that I don't think Ryan Braun will get card #1 any more, or even card #8 either. And I think I will be sure to get Uecker's take on things tomorrow afternoon, that will be interesting. Sorry, I promised to make my point....it appears that the Biogenesis bomb just might finally go off.

What will Topps do? It will be interesting. We won't know, cuz in baseball cards, as in baseball, there's always next year.
Posted by BaseSetCalling at 12:49 AM
Email ThisBlogThis!Share to TwitterShare to FacebookShare to Pinterest
Labels: Heritage, MLB At Bat App '13, PED PED PED, Yeah I Read The Backs