So, no, my subject for tonight is not Topps in Great Britain. Topps does operate in England and American sport card sets have been released in the British Isles, amongst other products. Like all things esoteric, you should know by now: there's a website for that. Probably several. Some good blogs written by good blokes over that way too.

Yes, see my subject for tonight is actually Topps and the English _language_. You remember English right? That class with the young female teacher that always seemed extra friendly with her oldest students, leading you to wonder just what could be learned in her French class? You know, English, that thing few users of the Internet seem to know how to use very well any more.

This year on Topps baseball cards, and by Topps baseball cards I mean the Base Set, or if you must, the "Flagship" set. Wait a sec here. Is there a Topps flag? There should be. Hardcore sports fans all have flags. No, I don't mean the cards with flags on them. I know all about them and and I don't want a single one of them. Not the flag cards or the flag backdrop cards either. But if there is a Flagship, there has to be a flag to fly on the ship, right? I just know that on that glorious day when I am finally hired to make baseball cards and I pull up to Topps World Headquarters, there should be a red-white-and-blue flag with the word Topps on it. OK, Ok, an orange-ish-red & yellow combo with a baseball appearing to fly out of it and a small "topps" would work too.

Anyhow this year we don't have any cartoons on the base set cards. Of course, that line about "The Chase" is cartoonishly stupid. There are those one panel cartoons on the '72 minis and the just released 50 card set of 72-style cards in '13 Archives, but those are more like weakly illustrated sports trivia questions that you can barely decipher when you are squinting that hard. Perhaps the drawings on the back of the 'Tall Boy' insert set in Archives will yield a nice bon mot or hopefully a visual pun, but I will never know because I have no plans to Chase those.

Without lots and gobs of cartoons to read, we have a little less frequent fun with words. But Topps can never quite quit such silly happy habits. I'm sure when the Base Set editor, or whatever glorious job title that job carries, was picking images to purchase for the Robert Andino card, this one was the instant numero uno: 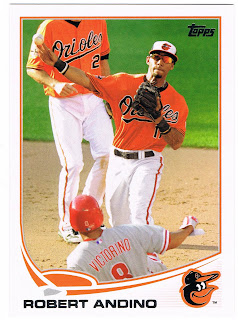 ... and not for the fantastically photogenic alternate O's unis used on so many awesome Baltimore cards dropped evenly for, gosh, heck, I'm just ... lost in that one eye blazing sunglasses there. So, like, totally bitchin' how the currently en MLB vogue orange shades match those uniforms. I'll have another Orioles card to gush over later this summer. Meanwhile, you can just hear the Topps crew giggling just like ten year olds ripping a pack and immediately imitating their local baseball announcer: "And Andino has the force on Victorino. And Andino has the force on Victorino."

But that is just fun with a simple language concept. Topps kicks it up a notch on this pair of cards: 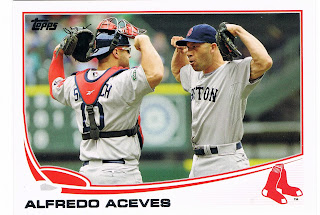 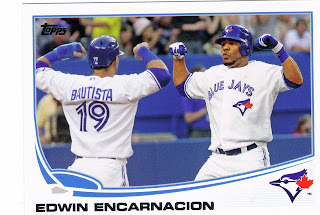 At first I thought this would be an example of 'Beast Mode' on cards, and perhaps it is, but that is so like, 2011, which is of course, 2012 in baseball card years. We're in 2013 now, try and keep up. And I'm not sure if the Encarnacion or Aceves celebration styles are related to each other, though Google Images reveals multiple examples of each. For homework tonight, you can determine the game dates on your own, which will be one of the quicker such exercises I've ever tried. I also wonder what would happen if Aceves faced Encarnacion in the bottom of the ninth and there was a dramatic strike-out or home run and the one busted into the other's touchdown dance move? Maybe the World Baseball Classic game with Aceves pitching to real Canadians answered that question and we have a case of Topps Voodoo, not Topps English. Maybe Aceves will eventually end up pitching for Korea, like his uni # inspiration, Dennis Rodman.

What does all this jibber-jabber have to do with English? Again I can just hear the Topps crew giggling like sophomores who just learned the meaning of the word "alliteration." I never thought I would use the word alliteration in relation to baseball cards, but there ya go. What is alliteration? C'mon, it's the 21st century. Just right-click or control-click on it. Or just ask Siri, she'll explain it pretty quick.

Too bad Topps didn't double down on this with the Josh Johnson and Jim Johnson cards somehow. More's the pity.

And all that fun just with the front of the cards. Normally, finding literary life lessons is restricted to the backs of the cards. I have previously found fun on the back of an upcoming Series Two card, courtesy of the Opening Day set of course. (I'm not 100% positive that is Gio's middle finger there). And I will soon have a lot more to say about the front of this card, but it's definitely another two-fer front-to-back:

Aww Topps, you're so punny!
Posted by BaseSetCalling at 2:58 AM
Email ThisBlogThis!Share to TwitterShare to FacebookShare to Pinterest
Labels: 2013, Topps English, Yeah I Read The Backs