I Need Your Blacks, The Camos And The Pinks


You'll have to play the air guitar part on your own. It's a pretty easy one, at a slow tempo.

I had thought to put this post up on the night Series 2 hit the streets, which I thought was today, though my new FLCS kindly, gently, broke it to me that Series 2 actually goes public next Wednesday. So I won't have any new cards to sigh over until then. At least I have a little more time to share my goofy notes on Series 1 in a timely manner.

This is my goal for the Base Set this year: 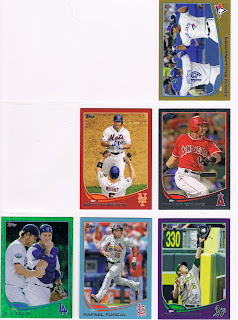 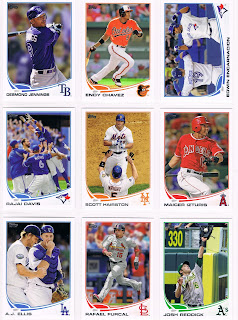 
Still a little puzzled? I want to put together a set of 2013 Topps with a different color parallel in each slot on the binder page. I like the set this year. I like the design, I like the colors. I especially like the way the colors combine on the parallel versions. There are a few teams I want to build a set of in a certain color — for the purple, who else but the Pirates? Purple Pirates. Arrrrrr! But how could I enjoy all the random parallel cards that one ends up with while building a simple Base Set? This is my answer.


I got this idea quite a while back now, but it took a lot longer to commit to this project. But gosh darn it, I'm good enough, I'm smart enough, and doggone it, people like me, I hope.

Success has many fathers, but failure is an orphan, as they say. This project has several fathers, starting with William@Foul Bunt. He is putting together a set of this year's Emerald parallels. I had randomly daydreamed about doing a parallel set, but moreso dreamed about someone else doing it. I never thought I could put together a parallel set. William supplied the germ. Then the rest of the blogosphere out there, always reporting their trades and showing how smooth trading baseball cards can be in the 21st Century, got this thing to sprout. The rest will be up to YOU.

This is simple enough for the Wal•Mart, Target, Toys-R-Us, Emerald, and somewhat too the Gold parallels. After that, things get tough. I am going to use any of the Blue Foil cards from Opening Day that match the card image in Series 1 or 2. I will also use the Blue Sparkle / Silver Slate cards, though I only have one right now.

The hard part will be the pink, camo, and black cards. I pulled one black border parallel from a hobby jumbo box back in February (shown above), and haven't found any of those 3 since.

So I need yours. Any of them. Since those three colors will be the most difficult to acquire, I will work with what I can of those, and then build the rest of the page around them. I have stacks of extras of the red, blue, purple (lots of purples), emerald, gold, and blue-foil parallels. I don't quite want to put up lists of which of those are available yet, in case I need to switch some out as blacks, camos, or pinks come in. If you really need a certain parallel, just ask. I have bought a lot of cards this year, once I decided to go for it.

I do have about 50 purples from 2012 that will all be available. Also 9 gold from last year. There will be a healthy list of 2011 parallels available too. I will get lists up as fast as I can, though I am still very busy with work as I type.

So on any of my trade pages or future posts, if I have something available from any year, I will take 2013 parallels for it. I have a good amount of late 70s Topps Football to work with, as well as Topps baseball from the late 70s to mid 80s if you are looking for anything from that era.

I will probably bump this post by repeating it some as the summer goes along and the blog might have new readers. I will start out slow though; I have one trade to mail tomorrow, and two more to finalize after that, over the weekend. Hopefully at the end of next week I can get off the every-day-till-dark treadmill at work, and then I can really dive into this.

So now that random pink, camo, or black card you scored at random but don't know what to with can find a home. If you'd like to trade one, send along an offer with a want list, or a link to your want list.

I've got to get going now, I think I figured out how to put a link to my nascent lists. Watch this space.

Posted by BaseSetCalling at 12:30 AM
Email ThisBlogThis!Share to TwitterShare to FacebookShare to Pinterest
Labels: 2013, Let's Trade, Parallels