Could be this one? 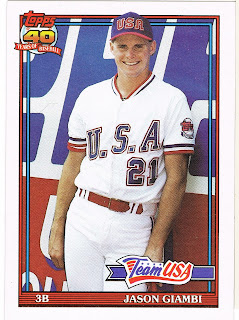 I see Giambi got a hit tonight. I've been trying to hold off posting this one till he hit a Home Run, for a bit more splash. 'cept I unexpectedly ended up in the town up the way there with the great Baseball Card Store, so I did a little shopping, and found a neat box of the '91 Traded set. Plus I need a short topic for tonight. Tired.

Topps got a hit here too. Team USA. Red, white and blue. There, was that so hard Topps?

I love the '91 set and collected it in the day, probably pulled in by the anniversary angle or something. But I never picked up the Traded extras. The shop-owner was concerned that it might not be complete, as it was not sealed, and he was right. The Team USA cards were all missing. I do own the one above from way back, not today, which is somehow the only one I have. So I will have to track those down, but I can't say it will be high on the to-get list. I've lived without them for 21 years, I think I'll make it through some more. For a five-spot, the card shop was happy, and I am happy.

I enjoyed thumbing through the 100-some cards I do have, and found some to post and mess around with some other time.

As for oldest active cards, I'm pretty sure I know what the next one is too, someone absolutely positively due to retire this year. But it's not a card I have or want as it is from a set I don't collect and it is also a non-baseball image; indeed it could be one of the first of such cards and that has been a terrible trend. For the '14 season, I won't have a clue, because after '91 my baseball card itch went into semi-hibernation for ten years.

When time and life and baseball move on into the future, it will probably be about impossible to discover the oldest active baseball card amongst all those kid cards today. Instead it is a bit of an interesting question to wonder which is the youngest player ever depicted on a card. That would take more research into birthdays and even set release dates then I would ever look into on such a trend in the hobby I'm just not into — though I also bought some cards today that partially make me a hypocrite on that idea. Something else I'll get around to-it some other night.

Last year 2 players retired that were older than me. The last such players. One didn't even receive a card during his final season after a career chock-a-block full of cards, and left us with this one, a great In Action edition: 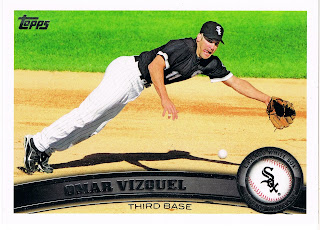 The other was Jamie Moyer, who's final game was in May, 2012. I have some thoughts and associated cards to post with his final card some other night.

Omar's final game was on the final day of the season. I made sure to catch the radio call, which was nice - he had one hit. But when he came out of the game in the 8th or so for a final crowd salute, well, I know at some point in the early fall in Cleveland, there will probably be a certain small set of fans who have the same thought I had 9 months ago now.

I guess my shot at showing up for Spring Training and making it to The Show is officially impossible now.

Posted by BaseSetCalling at 1:41 AM
Email ThisBlogThis!Share to TwitterShare to FacebookShare to Pinterest
Labels: 11 Series 1, 91 Traded, There's A Baseball On My Baseball Card