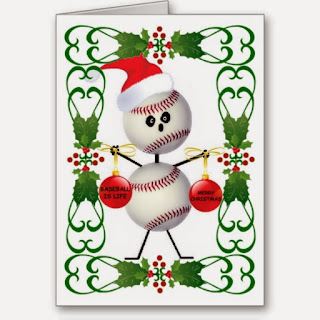 While I know there are a few scattered examples of baseball card / christmas card mash-ups, and Topps' occasional fun with the subject, I'm not headed off that way tonight. I did like the result of asking Google Images for a 'baseball christmas card' though.

The cards I have for you tonight are my first parallel collecting effort. I somewhat fell into it last winter, when I was ripping packs and setting aside the parallels into their little piles. I had no idea what I would ever do with them.

Then I noticed the leading team in the pile of Emeralds was the St. Louis Cardinals. A red team on a green card. Looks like something left over from Christmas, I thought. When I made my first trade of the 2013 collecting season with a friendly collector working on a set of the Emeralds (William @ Foul Bunt, just to your right as you read this), I carefully held out the Cards cards from what I would offer, and selected Cards from his available cards. 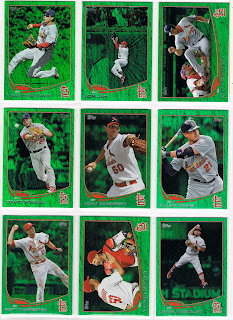 I just slowly worked on this one as the year went along, mostly by simply setting aside the Emerald Cardinals from the too many packs of baseball cards I ripped. I think not more than one or two arrived from a trading block after my trade with William (which already had me over ten cards if I recall...).

But of course, ripping packs is the hardest way to get the cards you want, and here at the end, I had to resort to picking up the last singles on eBay. The Molina was the toughest, as it probably should be. A great card of a tough player.

I've never built a purely team set before; not even for my favorite team, the Tigers. It is kind of nice to see an all-parallel team collection. Here is the second half of the set: 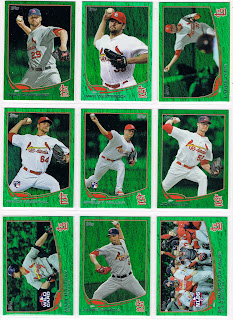 Yes, I stopped this effort at 18 Cards. Although I have 7 more Emerald Cards, I am sending these off to my Uncle, who I haven't communicated with in too many years. He is a life-long Cards fan, having grown up 100 miles south of St. Louis. He is not a baseball card collector and I'm not sure what he will do with these. I will suggest he consider giving them to anyone in his church who might want them, if he doesn't. But all that being the case, I decided to leave out the players traded away, and all of the Update Cards. I regret there is no Matt Adams on one hand, but I wasn't really up for tracking down a Michael Wacha on the other hand. And 18 cards perfectly fit in a single binder page for shipping and displaying.

It was fun though. I can picture my uncle's face when he connects the dots on why he received a set of green Cardinals baseball cards at Christmas time. I am working on one other such set, to keep for myself, of the Oakland A's, though of a different color.

Along with purchasing the final few Christmas Cards from a you-pick auction on eBay (why do I frequently capitalize the B in that?), I added a few Emeralds needed for my parallel project, a direct descendant of the Christmas Cards.

The incoming Emeralds completed one page, perhaps my favorite of 2013. An action-packed page of baseball cards: 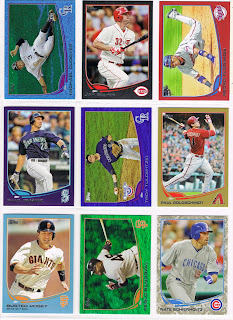 I think there is only one other page of cards like this one in 2013 Series 1 / Series 2 / Update, and that is an extremely memorable one, though I still need 3 parallels on it, and they are tough.

I haven't gotten around to figuring out how many other No-Pitcher binder pages there might be; I'm pretty sure there are no No-Hitter pages. I wish Topps would have a little more fun with all that; though they have started putting the card #s to use a little in that 2 players from the same team follow each other many times in the sets this year.

I sometimes wonder this time of year if this is how players feel in early February, particularly veteran players, and coaches and managers. Leaving home for the road for another season. I know those seasons add up. I am about to start my 22nd season of crossing a half-dozen state lines for up to a half-dozen months.

I know once I reach Spring Training camp (Charleston, SC - first stop this winter), I will be in my element. It's not baseball, but I will feel like a baseball player.

So I won't see y'all quite as much as I'd like, though I will post when I can. I actually started this blog while on the road last winter. I hope to scan up a stash of card images to blabber about some nights.

One of the great things about going On The Road, something oddly missing from the great, great novel of that title, is of course returning Home. When I get home next spring, I will immediately start opening boxes of baseball cards and setting them around the card desk. That will be ... like Christmas.