How could that be? Who would buy such a boring baseball memorabilia product? I have an idea who buys these, and they definitely buy 'em up because while looking for packs of this stuff I have found many a gravity feed box that is already empty. 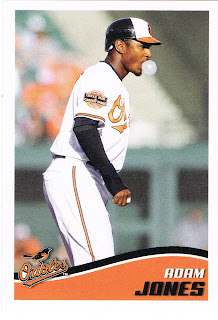 Baseball memorabilia and bubble gum go oh so well together. I have a certain fondness for the combo that can no longer be satisfied of course, though I can never understand why. You would think Topps and Big League Chew would have got married a long, long time ago in the age of marketing synergy for everything. I think some corporate consultants are asleep at the switch on that one.

But of course it is the fault of us grown-up baseball card collectors that gum never comes in the packs anymore. If it were to ever return, I think this would be the product where it will appear.

I'm babbling on about the 2013 Topps Baseball Stickers of course. The checklist is chock full of interesting entries. Though I do not have a complete set of them, I did select the Adam Jones shown above as a favorite. Because of the bubble gum...such a rare baseball image now. I was pleasantly surprised when I took it off the scanner to discover that perhaps someone at Topps has the same keening nostalgia as myself, since that is sticker #1 in the set. But then the stickers are #d by team like an old Fleer set, and the Baltimore Orioles, of the American Leauge, are the first team on the list.

There are plenty of Hall of Famers in the set... 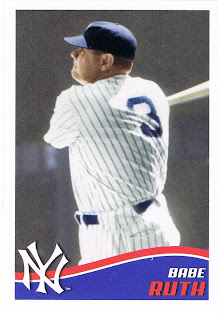 ...generally one per team, with exceptions of two for the Yankees, and a few younger teams that have a popular veteran not yet in the HOF. All teams receive an even 9 stickers.

Two thirds or more of MLB teams have a mascot sticker in the set, like this one which will definitely be on my Topp Ten list for 2013: 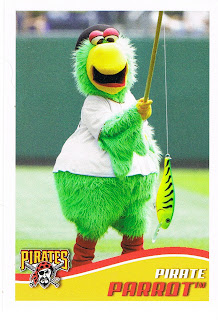 Two great hobbies for just 13¢. I will never have too many of these stickers to stick places and give to a few friends. So, yeah, I will super-collect this one! Send them along! (More on that in a bit.)

The set is a Topps product with a few images we've seen before, sometimes just the player's image from their 2013 Topps Series 1 or 2 card cropped differently, or an image borrowed from some other previously published set. Overall though there aren't many of those and I think the set will hold a vast majority of unique images. The checklist tells me there are two "RC" stickers (Bundy and Bauer), but I haven't pulled either one to see if that certain logo appears here too. I think I would laugh if I see that. Adam Eaton, who sports the RC logo on his '13 Series 1 "Topps" debut, does not have that on his sticker. I could hardly care less; I am not shooting for a set of these. My plans are a bit different, though you will have to tune in tomorrow to see.

Meanwhile, let's continue our tour of perhaps the ultimate base set: just current baseball players, a sprinkling of veterans, and two small subsets — not sticker:pack inserts.

The player images include _a lot_ of night shots. Night stickers, like this one: 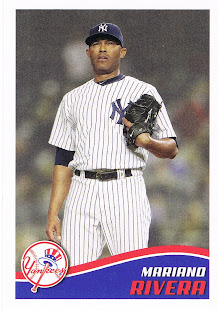 A sunset sticker? I suppose.

The image gallery features lots of pitchers pitching, and hitters admiring their bat's contact a moment ago, as baseball images always will. There are some other action shots, and these are frequently from night games, like this nice one of Michael Brantley maximizing his lead-off: 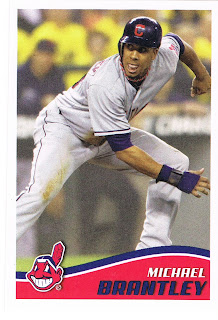 Topps does continue their 2013 fetish for maximum cropping on lots of these stickers, but this is one product where that is pretty much necessary, as each sticker is only 75% the size of a card. A pity, though, that Jayson Werth's sticker... 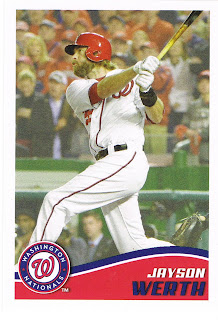 ...doesn't give up just a little more baseball game-context, as the crowd is standing and Jayson has his home whites on. Perhaps the image sleuths can sort this one out with the resources that go a little deeper than Google does, I haven't figured that out yet. This is likely a shot from the bottom of the ninth, at a night game, a time when it seems many baseball photographers have already filed their images for the evening, as I just don't see many shots like this one on my baseball cards. 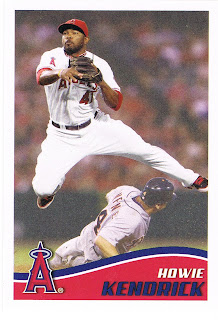 Turning a double play — at night! For whatever reason, all the turning two cards I can recall, and I have seen a lot since I started reading the baseball card blogs, are always shot in the daytime. There are at least 1 more of these (Pedroia, as A-Rod waves bye-bye sliding in), and possibly 2 (Altuve), in the set I have found so far. Jason Kipnis gets a daytime shot probably taken a frame before his Series 1 card this year, and Hanley Ramirez sees some field action with his shades on, though not necessarily on a double play as the ball is still coming in and the runner is likely safe. I'm leaving you a little fun to hunt for on your own dime at just a dollar-a-go. So you can build up your trade bait. For me.

There are some fun images amidst the live action, such as a nonchalant Jacoby Ellsbury: 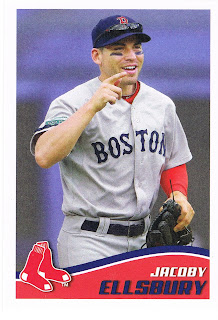 And it looks like Josh Willingham should be playing for the Angels: 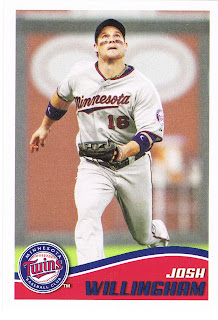 One of the funnier single stickers keeps butting in to the packs I purchase: 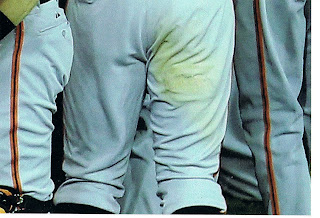 Which is a portion of the Giant's World Champions montage that closes out the Sticker Album sold separately. The Album has 6 stickers included on a perforated page, which I think is great. There will never be a PSA 10 of the first Topps Manny Machado sticker (Rookie Sticker) unless it arrives out the back door of the sticker factory. And yes, I have read collectors complaining about the fact that the free stickers aren't in the packs so those 6 players will never be in Pristine 10 condition, without trimming, and of course an investment grade baseball collectible like these 13¢ stickers should never ever be trimmed. You chuckle, but graded and slabbed stickers do exist these days.

Anyhow, aside from the World Champions there at the end of the album, the set includes one other simple subset, the MLB Team logos: 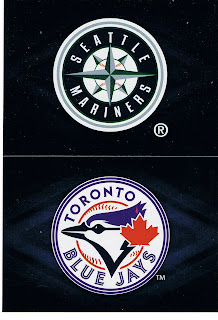 These are cleverly paired; I'm sure many a younger collector could not tell me why these two teams share space.

I have enjoyed my little piles of these stickers, but I will probably quit purchasing them, so I can foist off all the left-overs on you dear readers. And thank you for reading, by the way. The blogosphere chatter does seem correct that things have been slow lately; work reared up on it's demanding demands again, and I used up most of my softball scans while I had family in town before that. Though I have been participating in the hobby a good bit anyway, via my first Group Break, which was part of the Parallel Project which is a little ridiculously time-consuming. Each blaster and skim of the current eBay action changes everything. (A few trade emails headed out into your mailbox by the time you wake up as well).

So in my usual round-about way I am announcing some trade needs. I want to complete a set of the mascots, and for that I need the Nationals' Screech and the Phillie Phanatic. I also want all the Pirate Parrot stickers ever printed. Same for Bernie Brewer, he's the Man, and he wants to go visit some places with Mr. Parrot. Send them to me and I will make that happen. I also need extras of Wally the Green Monster, the Oakland Athletics Elephant (pink ears, really, it's not just all the beer you drank watching the game), Mr. Met, Fredbird, and the Orioles' Oriole.

I am also woefully short on the Detroit Tigers collection, for which I need Austin Jackson, Victor Martinez, Al Kaline, and Max Scherzer.

I also hope to assemble a set of the team logos, for which I need the White Sox, Rays, Cubs,  Marlins, Phillies, and Padres. And all of them over again as I have lots of uses for these stickers and can use them all. If you are really, really nice and read my list of 2013 Topps Parallel Project needs maybe you can pry one of these logo stickers away from me.

Otherwise, if you need or want a 2013 Topps Baseball Sticker, I probably have one for you, including most of the ones scanned-in above. Of course, we could limbo lower than a PWE trade and trade them on a post card even, but these stickers do have purposes (tune in tomorrow), so a nice, simple PWE would be fine. Let's Trade! You could even send them to me without using a top-loader. I won't tell anyone.
Posted by BaseSetCalling at 12:58 AM
Email ThisBlogThis!Share to TwitterShare to FacebookShare to Pinterest
Labels: Let's Trade, Topps Stickers